Did Arlen Specter ever apologize to Anita Hill?

Robert Reich says Specter sought "reconciliation." Gloria Steinem reveals she urged him to say sorry -- but did he? 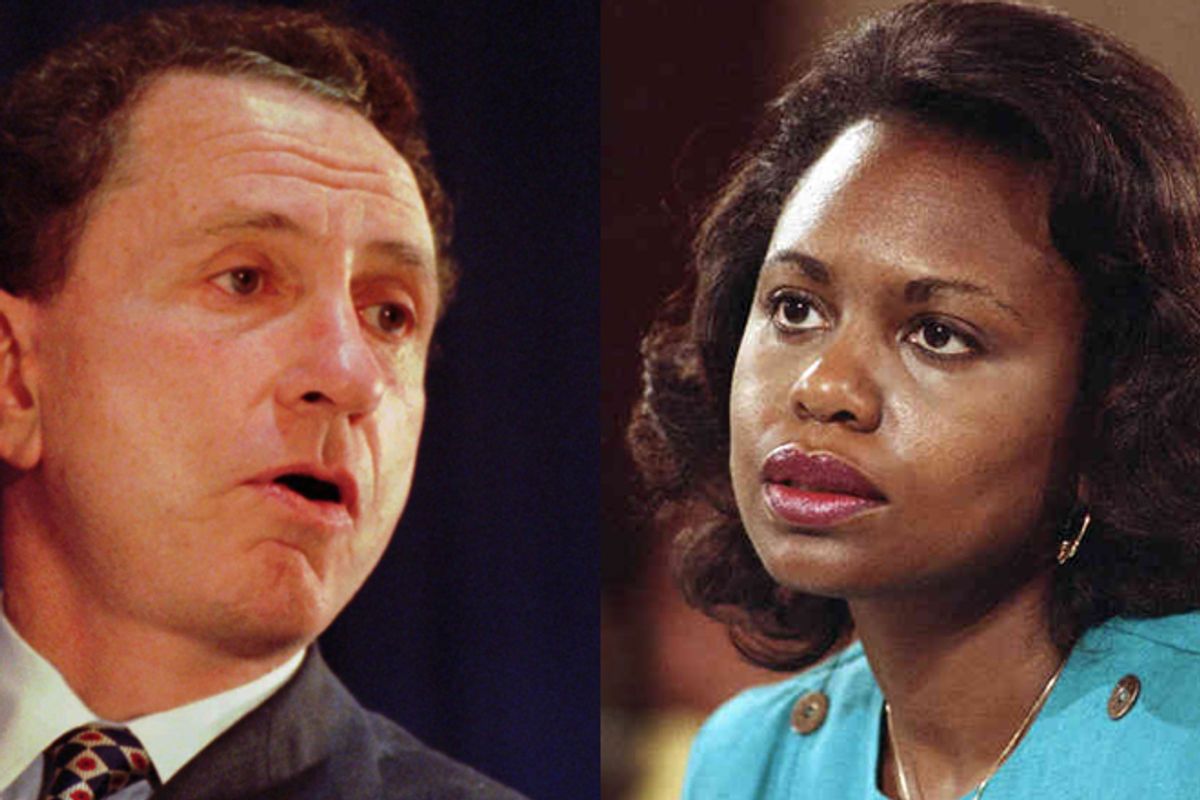 Hours after former Pennsylvania Sen. Arlen Specter's death was made public, word went around suggesting that he had quietly, belatedly repented for one of his most notorious moments -- serving, back in 1991, as Anita Hill's chief inquisitor and then voting to confirm Supreme Court nominee Clarence Thomas. "Years after Thomas hearing, Specter felt badly about how he had treated Anita Hill (see video below), and sought my help in arranging a reconciliation," wrote Robert Reich, in a widely circulated tweet.

But was there any such "reconciliation," or better yet, apology? After all, for decades after the event Specter had firmly refused to apologize publicly for gleefully grilling Hill, accusing her of "flat-out perjury" and telling the press that Hill's "credibility has been demolished."

"As far as I know there was no reconciliation," Reich clarified in an email. "He expressed to me, one evening when we were having dinner together, his wish for there to be one."

Specter never came anywhere close to expressing that regret in public, though he once said that not a week went by without him being asked about Hill, and he even included her name in the subtitle of his 2000 memoir, "Passion for Truth."

In 1992, facing a challenge from Lynn Yeakel partly fueled by widespread anger at his conduct during the hearings, Specter asked Gloria Steinem for advice, Steinem reveals to Salon. "He seemed very surprised at the anger towards him for the way he'd treated Anita Hill. He'd been a pro-choice Republican, and perhaps he regarded himself as somewhat less subject to anger. I suggested that he just apologize, that a public problem could probably only be cured in a public way." Specter did not take her advice.

The only point Specter conceded, in his memoir, was that he and his fellow "aging white males" on the Senate Judiciary Committee "didn't understand the explosive nature of the [sexual harassment] issue," and that he "had not know how painful it was for women who were watching the questioning, so many of whom had been victims of sexual harassment, and saw themselves, almost through transference, in Hill's position." As recantings go, this amounts to "I'm sorry you were offended."

As recently as last year, Specter told Newsweek,  “I have no regrets. I think I did a professional job, and I continue to believe the core conclusion that Anita Hill’s testimony was not a disqualifier.” In 2004, he told the New York Times,  “I’ve gone back and looked at every frame of the videos on Professor Hill, and I did not ask her one unprofessional question.”

When Specter was voted out of office in 2010, he gave an interview to the Philadelphia Inquirer in which he joked that, essentially, feminists should be thanking him. "Anita Hill has done more to advance women's interests in our society and the world than almost anyone," Specter said. "I aided and abetted." To the Pittsburgh Post Gazette, he said, "There was a profound effect on elevating women's rights from that hearing."

But he also told the Inquirer that a woman came up to him on the night before the 2010 primary and demanded he apologize. He refused, again.

Some fellow senators took a different tack. Feminist activist Ellen Bravo says that the senator who ran into her and said, “Can you ever forgive us?” was sitting Wisconsin Sen. Herbert Kohl. (" I said to him, it's not you, you were one of the best," Bravo told Salon.) In her memoir, Hill writes that  the father of Sen. David Boren -- the Democratic senator from Oklahoma, her home state -- sought her out to apologize for his son's behavior.

Hill has not yet responded to a Salon request for an interview. In 2011, she told Newsweek, “But of course I’m angry. I’m angry with [Thomas], I’m angry with the senators—I’m probably less angry than I was 10 years ago, but it’s still there. I think we let go of anger bit by bit. To me, the best way to do that is to think about what my contribution can be, to make sure this doesn’t happen to other people. The larger goal is both gender equality and racial equality, because both racism and sexism contributed to my being victimized.”

Specter's lasting contributions included the confirmation of Clarence Thomas. Three years after voting to confirm him (after helping keep Bork off the Supreme Court), Specter said in a Washington Post interview that Thomas turning out to be anything but a moderate was "my greatest disappointment." The paper said Specter remained "hopeful that [Thomas'] life experiences as an African American, going from poverty to success, will ultimately take hold." That was in 1994.