GOP consultant Nathan Sproul has been accused of electoral misconduct. It's no surprise then who he's tied to 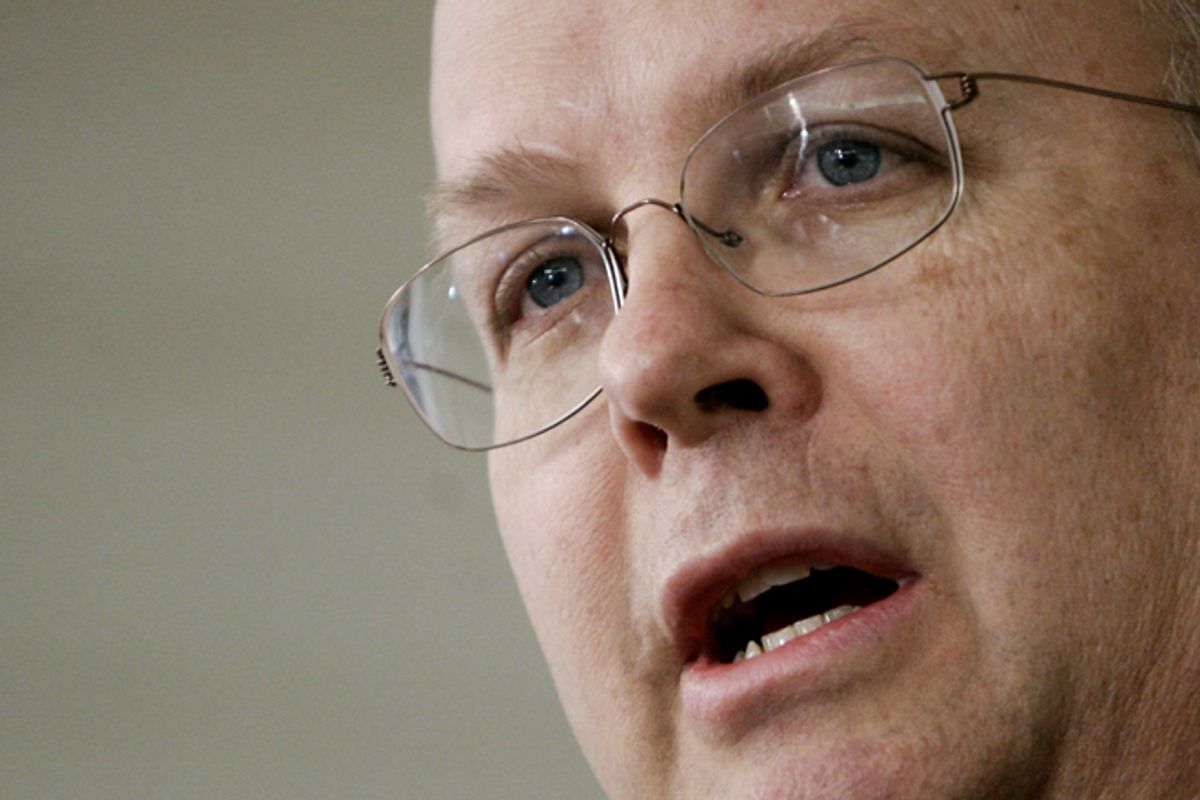 Congressman Charles Gonzalez (D-Texas) has written GOP party boss Karl Rove a letter demanding that Rove, co-founder of the conservative super PAC American Crossroads, explain his ties to a Republican operative who has been accused of electoral misconduct and voter registration fraud.

The letter, coming less than a month before the upcoming presidential election, comes at a time when increasing attention is being given to the issue of voter suppression, a technique that played a key role in Karl Rove’s victorious 2004 campaign that reelected George Bush.

This time the operative in question is Nathan Sproul, who, with his company, Strategic Allied Consulting, has been accused of electoral misconduct and voter registration fraud. Sproul’s company allegedly collected fraudulent voter registration forms, some of which had the addresses of existing Democratic voters changed so that the validity of their registration might be challenged on Election Day. His company has been hired by the Republicans to work in seven battleground states—Florida, North Carolina, Virginia, Nevada, Colorado, Wisconsin, and Ohio. In some states, he also appears to be working under the name Issue Advocacy Partners.

The Los Angeles Times reported on October 12 that notwithstanding the allegations against him, Sproul still was working for the GOP in more than 30 states.

So what does Sproul have to do with Karl Rove?  According to a report by Brad Friedman that appeared in Salon and on his own site, BradBlog, American Crossroads has paid at least $750,000 for Sproul’s services. On October 9, Representative Gonzalez’s letter to Rove inquired about American Crossroads’ relationship to Sproul and his companies in the past and whether Crossroads has ongoing ties with Sproul during the current election cycle. Among other questions, Gonzalez asked Rove what services Sproul provided for American Crossroads, why he was hired, why Rove would associate with someone who had a reputation for participating in voter fraud, whether Crossroads has severed its relationship with Sproul, and whether it has worked with him under other names. Gonzalez urged Rove to respond by October 23.

Whether Rove responds or not, there is evidence that Sproul has worked for Rove in the past. In 2004, Rove’s last presidential campaign, employees of Sproul & Associates were reportedly trained to falsely identify themselves as non-partisan and then register Republicans to vote while discouraging Democratic-leaning voters. According to testimony by Representative Linda Sanchez (D-California) at a 2008 House Judiciary committee hearing, “For those Democratic-leaning voters who completed registration cards, Sproul employees in Pennsylvania, Oregon, and West Virginia allegedly destroyed those registration cards…. [T] hese activities are clearly aimed to suppress the Democratic vote and to favor Republican candidates.”

As I report in Boss Rove , in many ways Rove is the father of the voter suppression movement, and his attempt to gin up a massive campaign against voter fraud, a phenomenon that is largely nonexistent, was a major factor behind the U.S. Attorneys scandal in which Rove was a prime figure.

Thanks to what he called “Karl Rove’s obsession with voter fraud issues throughout the country,” New Mexico U.S. attorney David Iglesias, a Bush appointee, spent more than two months probing claims of voter fraud in his state in 2004 and found no cases worth prosecuting. Nor was he alone in finding scant evidence of such crimes. According to the New York Times, between October 2002 and September 2005, the federal government convicted a grand total of eighteen people for the crime of voting while ineligible—out of more than 120 million votes in the 2004 presidential election, and another 80 million who voted in the 2002 midterms.

All of which suggests Rove’s “voter integrity” initiatives were part of a campaign to suppress the vote of Hispanics, African-Americans, the elderly and other groups who largely vote Democratic. With the help of Mark Hearne, national counsel to the Bush-Cheney campaign, Rove initiated aggressive efforts in 2004 to suppress Democratic voting in the battleground states, particularly Ohio, Florida, and Pennsylvania. According to his law firm’s website, “Hearne traveled to every battleground state and oversaw more than 65 different lawsuits,” challenging voter registration drives by pro-Democratic groups, popularizing claims about widespread voter fraud, and demanding stricter voter ID laws.

One tactic Republicans relied on was known as “caging,” a technique that typically starts with direct mail being sent to voter rolls so that lists consisting of addressees from which the mail is returned undelivered can be compiled. In Ohio, according to a report by the House Judiciary Committee, the state Republican Party decided “to engage in pre-election ‘caging’ tactics,” selectively targeting 35,000 predominantly minority voters* whose letters had come back as undeliverable. For the most part, the report said, that included voters who were homeless, serving abroad, or who simply chose not to sign something concerning the Republican Party.

Once again, Ohio is a particularly crucial swing state, and this time the Secretary of State, Jon Husted, is a Republican who is a veteran of the 2004 campaign with Rove who appears to be making a concerted effort to limit turnout. In addition to issuing a directive that forbids boards of elections from notifying voters about mistakes in absentee ballots. Ultimately, such decisions may well play a key role in determining the outcome of the election.