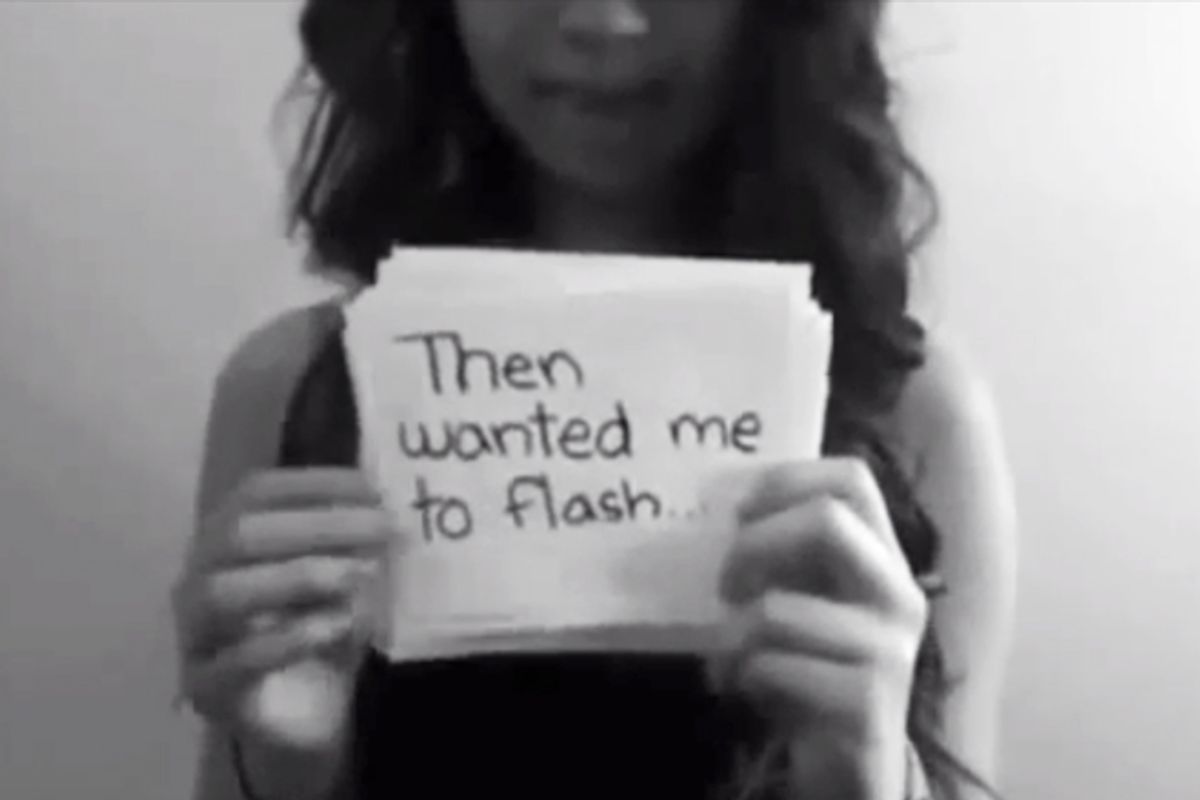 The story of 15-year-old Amanda Todd differs in many ways from that of 49-year-old Reddit troll Michael Brutsch. But where these two recent narratives dovetail is in the way they both illuminate the harrowing world of anonymous bullying — and the devastating real-world consequences of the stomach-turning online culture of "jailbait."

In September, the British Columbia teenager Todd posted a chronicle of "My story: Struggling, bullying, suicide, self harm" on YouTube. In the nearly nine-minute video, Todd silently told, via handwritten notes, of first going on webcam as a seventh-grade student, and of the person who'd asked her to flash him. She did, and a year later, he found her on Facebook and demanded she "put on a show" or he'd send the topless photo of her to her friends and family. She refused, and he followed through on his threat, setting off a chain of grotesque events. As Todd battled depression and anxiety and drugs, she said the man created a Facebook page to broadcast the image. She changed schools and still endured "name calling" and being "judged," and friendlessness. "I can never get that photo back. It's out there forever," she wrote. She was teased and harassed, beaten up. She attempted suicide by drinking bleach. "Every day I think, why am I still here?" she wrote. Now, she isn't. Todd died last week, and a local school official told the Star she'd committed suicide.

That's when the hactivist group Anonymous got involved, tracking down a 30-year-old British Columbia man and uploading a litany of evidence on "Amanda Todd's Extorter that caused her suicide" on Pastebin. I haven't linked directly to the Pastebin page, because the presence of a Facebook group saying he "WILL DIE" and reports of people showing up at his possible address suggest a snowballing vigilantism that's disturbing in its own way. But in addition to the man's name, email and the street where he allegedly lives, there's a trail of evidence suggesting his presence in online teen forums, as well as 1,005 visits to a "Jailbait Gallery." In its YouTube message, Anonymous calls the man "an abomination to our society" who "will be punished."

He sure as hell ought to be. The person who tormented Amanda Todd was a user, creator and distributor of child porn, a blackmailer, and a stalker. His behavior went so far, far outside both the law and basic humanity that they're going to have to build a ring of hell just for him. And one of the most repugnant aspects of the story of what this monster did to Amanda Todd is that he exploited the natural teenage desire for connection. As Signy Arnaso, of anti-child-exploitation group cybertip.ca, told the CBC Tuesday, "Being sexually curious is not an abnormal thing as an adolescent. It's quite developmentally normal. The problem is that when you combine it with the online world then the effects can be devastating."

And that curiosity of one group, that inclination to share, is what allows another group to flourish. Amanda Todd's bully, the creep who asked her to "put on a show," didn't exist in a vacuum. Nope, he was able to find a nice cozy home in the land of jailbait galleries. Just like, for a time, Michael Brutsch had.

Until last week, Brutsch's alternate identity as Violentacrez, a man who oversaw a voyeurism Reddit section called "Creepshots" and who'd created its "Jailbait" area devoted to "sexualized images of underage girls," as well as a self-explanatory "Picsofdeadjailbait" — was a secret. Yet as Brutsch explained to Gawker in Adrien Chen's masterful, haunting profile of a troll, he wasn't such a demon. After all, "all he had done was spearhead the distribution of thousands of legal photos of underage girls."

Earlier this year, Reddit banned the Jailbait  section — notably after Anderson Cooper made a big stink about it on television. This week, after the much-talked-about Gawker story, Michael Brutsch lost his job. And somewhere in British Columbia right now, it's a safe bet that a man who's left an incriminating trail of evidence leading to a dead teenage girl is probably losing his job and having a very uncomfortable conversation with the cops.

The Internet didn't create creeps who get off on leering at young girls. What it has done, however, has enabled them to prowl in those girls' spaces — to barge into their conversations and lure them into a "flash," to steal their bathing-suit photographs for their "galleries," to violate their privacy under the protection of anonymity and the guise of a shared interest camaraderie. That's the thrill for these ogres — in taking something away from a girl — and in having a place where they can feel safe and supported for doing that. And those spaces in turn have helped their behavior ripple out to create a larger culture that tells girls to be sexy and then calls them sluts when they are, that bullies and shames them and dehumanizes them.

It isn't just because of guys like her blackmailer that Amanda Todd is dead. It's a lot of reasons, including guys like Michael Brutsch. So maybe now, as more forums close and bullies are exposed, some of the Web's predators may be getting a literal reminder of why it's called "jailbait." And the next person to be punished won't be another young girl.