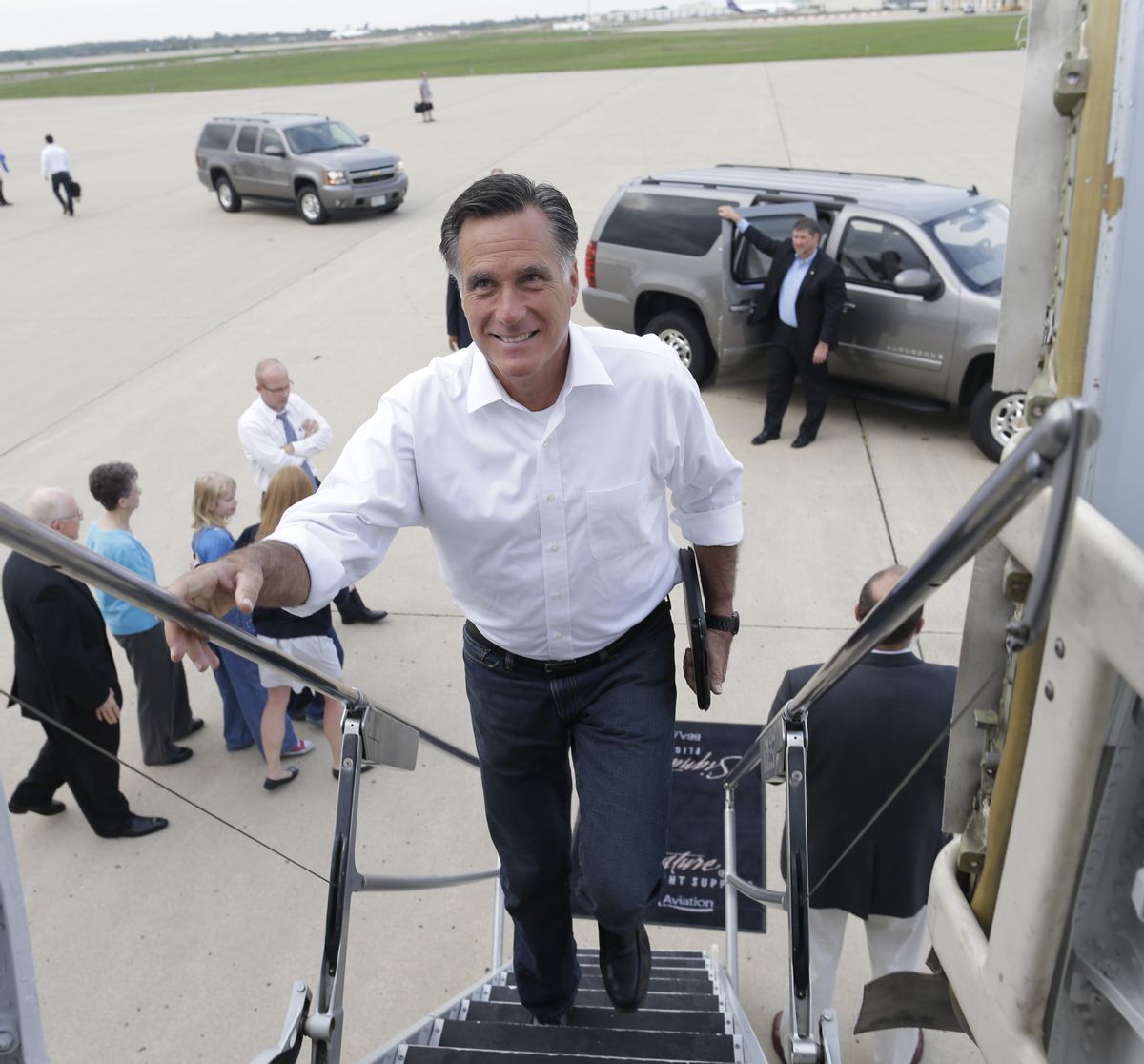 Mitt Romney’s infamous dog-on-the-roof-of-the-car story is atrocious, and has been mocked within an inch of its life. But there are many other stories from the Republican presidential candidate’s personal life that illuminate what kind of a human being he really is. Here’s a look at a few of them.

1. Mormon women have reported "horror stories" about Romney from when he served as a Mormon bishop.

According to investigative reporter Geoffrey Dunn, several Mormon women have reported disturbing stories about how Romney treated them while he was an LDS bishop and “stake president.” (One Mormon woman who’s known Romney since the '70s called them “horror stories.”) In one story, a woman who was facing a life-threatening medical condition was advised by her doctor to terminate her eight-week pregnancy. Despite receiving the blessing of her local stake president, Romney, then a bishop, reportedly came to her hospital room uninvited to pressure her not to go through with the abortion. "At a time when I would have appreciated nurturing and support from spiritual leaders and friends," Sheldon has written, "I got judgment, criticism, prejudicial advice, and rejection."

In another incident, Romney reportedly pressured a woman to put her son up for adoption because, according to the woman, her son “didn't have a Mormon father in the home and because of the circumstances of his birth--being born to a single mother.” She said she felt attacked and intimidated by Romney.

Other details from the report reveal that Romney “never seemed to be particularly comfortable in the company of unmarried Mormon mothers.”

These stories, and others from Dunn’s reporting (not to mention Romney’s wavering, but always troublesome, abortion stance), illustrate a man who is ill-suited to govern the female half of the U.S. population.

2. He reportedly pushed Bain employees to lie to get information.

In a recent story in Vanity Fair, Nicholas Shaxson interviewed one of Romney’s former Bain employees, who said he remembers his old boss being “nice,” “fair” and encouraging,” but also someone who had no problem bending the truth.

Romney, the person says, suggested “falsifying” who they were to get such information, by pretending to be a graduate student working on a proj­ect at Harvard. (The person, in fact, was a Harvard student, at Bain for the summer, but not working on any such proj­ects.) “Mitt said to me something like ‘We won’t ask you to lie. I am not going to tell you to do this, but [it is] a really good way to get the information.’ … I would not have had anything in my analysis if I had not pretended.

“It was a strange atmosphere. It did leave a bad taste in your mouth,” the former employee recalls.

This probably shouldn’t be a huge surprise, given the whoppers Romney has been telling on the campaign trail, including in the first debate.

3. He paid for his son and daughter-in-law’s surrogacy agreement, which included an abortion clause.

Speaking of Romney’s hard-to-pin-down stance on abortion, a recent story about his son Tagg, who had twins through a surrogate earlier this year, reveals that Romney seems to fall into the “abortion for me, but not for thee” viewpoint so common among conservatives. As AlterNet's Sarah Seltzer recently noted:

TMZ released a blog post this weekend explaining that in the surrogacy agreement signed by Mitt Romney's son, Tagg, there were clauses that allowed both the parents and the surrogate to opt for an abortion in non-life-threatening (but serious) situations.

There’s evidence that the clause may have been included by mistake, but:

Still, the fact they did allow the clause in -- and indeed, that it's a standard part of surrogacy agreements -- is telling, because it's totally reasonable to have those kinds of clauses in a surrogacy agreement. Surrogates shouldn't be compelled to complete pregnancies that threaten their health. That's common sense, right? Not in Mitt Romney and Paul Ryan's dream world.

Americans, this is your Republican nominee for president of the United States.

4. He’s annoying his neighbors by quadrupling the size of his beach house.

So, about that $12 million beach house: the Romneys plan to make it four times its original size. Unsurprisingly, the neighbors are not thrilled – not only because of the “impact on the neighborhood,” but because of their political leanings.

The New York Times' Michael Barbaro talked to several of Romney’s neighbors in June and found that many of them are Obama supporters and at least a few are gay couples, like Randy Clark and Tom Maddox.

The men, who married in San Francisco four years ago, were asked by Mr. Romney’s architect to sign a document that stated they have no objections to his planned renovations, which would obscure a portion of their ocean view. They refused.

Mr. Clark, an accountant, is trying to organize a campaign fund-raiser at his home for President Obama and hopes to bump into Mr. Romney on the street, so he can explain, “in a neighborly way,” why he thinks his relationship with Mr. Maddox deserves the same rights and status as the marriage between Mr. Romney and his wife, Ann.

Good luck getting neighborly with the Clark-Maddox household, Mitt.

5. He publicly berated a man for drinking and smoking weed.

As Barbaro reported in June, the Romneys “have tried to weave themselves into the fabric of local life” in La Jolla, Calif. But the way they’re going about that social weaving is a little odd. For instance:

Mr. Romney and his wife take regular walks around La Jolla, exchanging pleasantries with fellow strollers and occasionally enforcing the law. A young man in town recalled that Mr. Romney confronted him as he smoked marijuana and drank on the beach last summer, demanding that he stop.

I can think of a lot of ways to ingratiate yourself with the neighbors; ordering them to stop drinking and smoking is not one of them.