Is Sheriff Joe Arpaio driving Arizona voters to the Democrats?

The race-baiting right-winger could go down, and bring top Republicans down with him 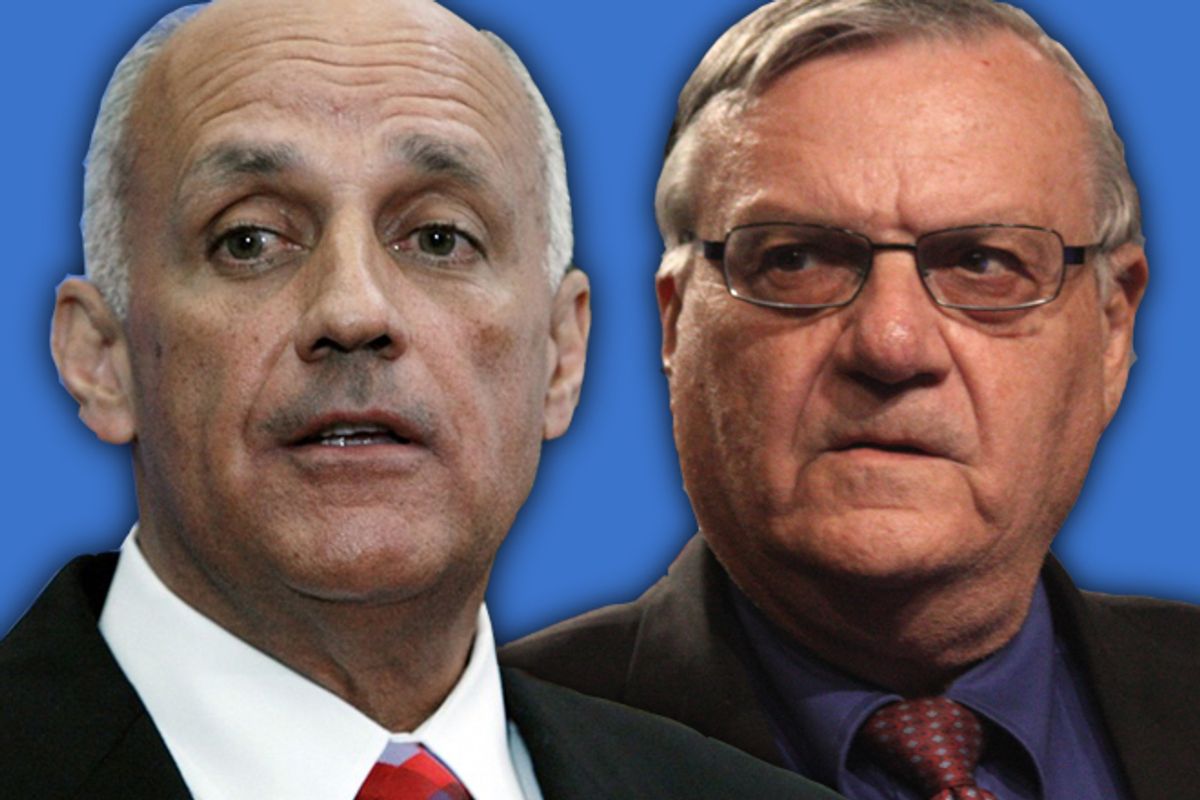 Arizona has earned its reputation as a sort of conservative laboratory where right-wing fetishes too kooky for other parts of the country can be brought to life. Among other experiments, there's been SB-1070, the infamous immigration measure, and a law to allow people to carry concealed weapons without permits or background checks. Oh, and the state has seen plenty of flirtation with birtherism. It’s fitting Arizona has its very own time zone, a Democratic flack joked to me recently.

But you reap what you sow, as they say, and the nativist fervor state officials have been whipping up for years may be turning on them. Former state Senate president Russell Pearce, the author of SB-1070, has already been deposed. And on Nov. 6, the state’s even more famous immigrant-fighter, Maricopa County Sheriff Joe Arpaio, could be next. Despite a massive war chest, Arpaio is now clinging to a mere 4-point lead, according to the latest poll. The most likely reason? Arpaio's racially charged antics have politicized and mobilized Latinos

Arpaio's opponent, Paul Penzone, is the immediate beneficiary, but the Arpaio effect could help Democrats up and down the ticket, and that includes Richard Carmona, candidate for U.S. Senate, and President Barack Obama. "The sheriff has done so much damage to our community that people have had enough," Penzone told Salon. "The sheriff's race is the most emotional, it’s the most polarizing, and it’s the one where, if we can inspire voters to get to the polls, in a lot of ways it will benefit other candidates."

A third-party candidate could spoil the election for the Democrat, but regardless of the outcome of his race, the mere presence of Arpaio’s name on the ballot could prove to be a huge boon for Democrats statewide up-ballot. After Arpaio’s five terms in office harassing the county’s brown people in what the Department of Justice alleges to be systematic racial profiling, many Latinos are eager for a chance to boot him out and the chance to do so could bring thousands of new Democratic voters to the polls.

With 3 million residents, Maricopa County, which includes Phoenix, has almost 60 percent of the state’s entire population. And almost a third of the county’s residents are Hispanic, so their potential impact statewide is enormous. So far, however, many in the community are not registered or do not often turn out to the polls.

Fully 80 percent of Arizona’s Latino population support President Obama, according to a Latino Decisions poll from last week, while about 75 percent are backing Democratic Senate candidate Richard Carmona, a former Green Beret and surgeon general who is mounting a surprisingly competitive bid in the red state. A recent Democratic poll has Carmona up by 4 points over his Republican rival, while he has a narrower lead in polling averages. Obama has stayed fairly competitive as well. There are also at least two competitive House races in districts that include part of Maricopa, the 2nd and 9th districts. But it's Carmona’s race where the most is on the line.

Recognizing this potential Arpaio effect, labor, Democratic and Latino activists have launched a massive campaign to mobilize Latino voters in the county. Adios Arpaio, a group backed by the hotel workers union UNITE HERE focused on voter registration, has hired 20 organizers and recruited over 1,000 volunteers, many of them Hispanic high school students. When the registration deadline closed on Oct. 9, the group had registered 34,000 new Latino voters in the country, which translates to a 20 percent increase within the city limits of Phoenix.

Brendan Walsh, the co-director of the campaign, said there’s a huge untapped power base among Latinos in the county. He pointed to the election of Daniel Valenzuela to the city council in 2011, who mounted an underdog bid on the belief that he could get Latinos who hadn’t previously voted to turn out for him. An aggressive ground campaign organized by a similar coalition to the one targeting Arpaio helped boost Latino turnout by 100 percent citywide and almost 500 percent in some areas. “It was a huge victory ... After getting creamed in the 2010 election, it just transformed how people feel about politics in Arizona right now,” he told Salon.

As for the potential impact of Arpaio’s race on Carmona’s, Walsh said, “We’re hoping that our folks will see a Latino name on the ballot and vote for him. And most of the people we’re registering are Democrats, so I think it’ll help Dr. Carmona’s chances.”

Penzone, Arpaio's opponent, is a no-nonsense former undercover cop from Phoenix who was a political independent before Democrats convinced him to run. On the phone, he speaks in the hyper-serious monotone of a highway patrolman handing out a speeding ticket, but his frustration is evident when he talks about what he sees as the mockery that Arpaio has made of his profession, what with the pink underwear, Steven Seagal stunts and -- worst of all -- tragic mishandling of hundreds of child sex abuse cases. “I take great pride in what law enforcement stands for, the service that it provides for the community ... I think the sheriff has misrepresented that and it undermines not only law enforcement, but the safety of our families,” he told Salon.

Turning out the Latino vote is critical, he said. He said that unlike in Arpaio’s sheriff's office, he worked hard in the Phoenix police department to build trust among the Latino community, “so my relationships are already in place, I’ve already earned their respect.”

So could Arpaio actually go down? “Yeah, there’s a real shot he could lose,” said Stephen Lemons, a reporter with the alt-weekly Phoenix New Times who has been covering Arpaio for years and broken countless stories of the sheriff’s sordid affairs in office. “He’s probably running harder than he’s ever had to run before, maybe since his first time out 20 years ago. He’s throwing everything at the wall right now.” That includes hundreds of thousands of dollars of attack ads against Penzone, include the latest one, which accuses the former police sergeant of beating his ex-wife, a claim Penzone denies and court records cast doubt upon.

“I think in a weird way, Arpaio himself helps” Democrats’ chances, Lemon said. “He’s a rallying point in the Latino community, someone to rally against. His record of demonizing immigrants and sweeps in Latino neighborhoods that he’s done over the years ... all that falls into why the Latino community is going to show up to vote in greater numbers than they have before,” Lemons said.

But the real Arpaio effect may not be felt for years to come, as the state’s population trends increasingly Latino and after thousands of young people are trained to organize. “Even the Republicans can read the writing on the wall. They’ve got to know that they have to change,” Lemons said. An Arpaio loss would be “historic in numerous ways. We’ve already seen some titans fall ... It does seem the momentum is against them,” he added.

Walsh agrees. “I think that four years, and certainly eight years from now, Arizona will be unrecognizable for what it was 10 years ago. It used to be just sort of an outpost for retirees and agriculture growers and migrants. A raw materials place dominated by corporations and the white men that run than. It’s going to be a really, really different state several years from now.”