Debate rematch: Obama has to call out Mitt's flip-flops

In tonight's debate, the president needs to channel Joe Biden and expose the two faces of "moderate Mitt" 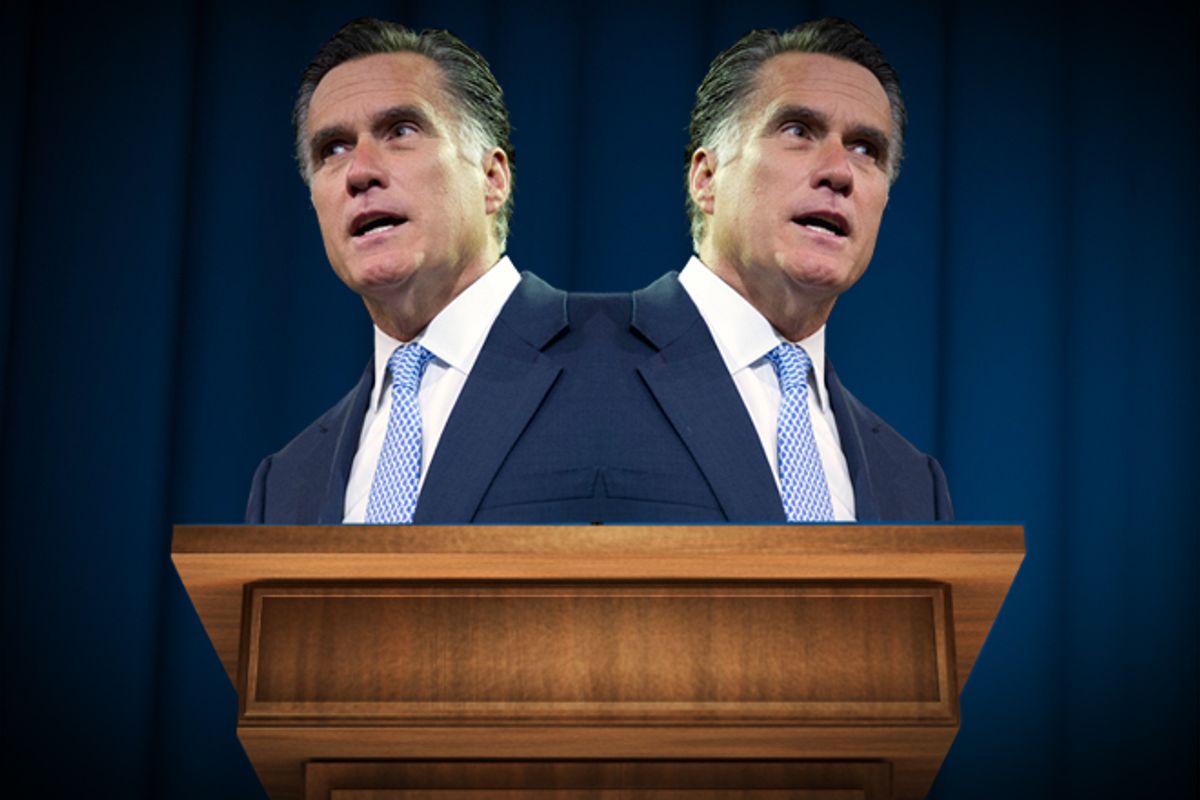 With a mix of hubris and rhetorical gymnastics, Republicans Mitt Romney and Paul Ryan are trying to recast themselves in the final weeks of the 2012 presidential campaign as a palatable, centrist tandem. The Romney-Ryan reboot is fully underway.

In the first presidential debate, Romney denied that his tax plan would blow a $5 trillion hole in the budget and heavily favor the rich; a week later, Ryan claimed that his fantasy, 10-year budget proposal would save Medicare by taxing high-income Americans more. For voters checking into the race late — most of whom, as political scientist Larry Bartels explains, probably have almost no understanding of the Ryan budget plan or its likely impacts — Romney and Ryan might appear to be middle-class crusaders proposing fresh, reasonable ideas.

That their plans are either Bush-era retreads or updated variations of the upward-redistributive political agenda conservative Republicans have been prosecuting since Ryan was in diapers is beside the point. The presidency is on the line, and if that means undergoing a Total Electoral Makeover, so be it. “I think you hit a reset button for the fall campaign,” Romney strategist Eric Fehrnstrom infamously let slip back in March. “Everything changes. It’s almost like an Etch-A-Sketch. You can kind of shake it up, and we start all over again.”

After a pallid and listless performance in the first presidential debate, will Barack Obama channel his inner Joe “That’s Malarkey” Biden in tonight’s must-win second debate and criticize Romney as a poseur and flip-flopper? The media has proved time and again that they will only call out fabrications and policy contradictions if candidates prime them to do so. Obama may not like having to do his own dirty work, but there are no more vice-presidential debates. The task falls upon him alone.

Romney’s remake is not unprecedented, of course. The conventional wisdom is that presidential candidates of both parties are expected to move toward their respective bases during the primary to win the nomination, then scramble back to the center during the general election to win the White House.

Indeed, Beltway electoral handicapper Stu Rothenberg wonders why Romney didn’t pivot earlier. “[I]nstead of moving toward the middle during the late spring and summer, the former chief of Bain Capital remained stuck in place, focused more on rallying conservatives behind his candidacy and avoiding the inevitable flip-flopper (Etch-A-Sketch) attacks. Romney’s — and GOP strategists’ — problem is that a chunk of the party doesn’t seem to value problem-solving, compromise, experience, coalition-building, intelligence and intellectual sophistication, so any move to the center would entail some risk,” Rothenberg wrote, citing the blowback Republicans suffered in 2010 from failed Tea Party Senate nominees like Sharron Angle, Ken Buck and Christine O’Donnell.

But two aspects of Romney-Ryan 2.0 are especially noteworthy.

First, within the modern GOP, the ideological distance now required for such backtracking is much greater than it was just 10 years ago, to say nothing of 30 years ago. And second, of course, is the fact that the peripatetic Romney has already completed an equally distant (if less rapid) rightward trek from the centrist identity he staked out a decade ago during the pre-presidential phase of his political career as Massachusetts governor.

Meanwhile, conservatives of the Limbaugh-Hannity variety reject the conventional wisdom that presidential candidates — and by that, they mean only Republican candidates — need to move toward the center to win. To them, the conventional wisdom is wrong both generally and specifically in Romney’s case. Their general belief is that Republican presidential nominees actually risk losing the general election by moving to the center because America is a country where — in an oft-cited but entirely misleading statistic — self-identified conservatives outnumber self-identified liberals; their specific complaint is that Romney’s earlier policy positions on the individual mandate, abortion and gay marriage suggest he’s not really one of them in the first place. (Recall that some conservatives, like Rick Santorum, believe the equally suspect John McCain lost because he was insufficiently conservative.)

Either way, the message to Romney from the right is clear: Don’t do it.

Because they want to win, Romney and his advisers are smart to ignore this advice. They can read the very same polls that confirm how unpopular many of Romney’s policy proposals are. If the former governor were a war hero or dynamic personality, or if Obama’s overall approval ratings were a net negative (according to Gallup, they remain slightly net positive, and his economic approval ratings actually improved a bit since the president’s lackluster performance in the first debate), the Romney campaign might have been able to gloss over policy and sell their man as an economic savior.

Instead, Romney has to obscure his policies by making them appear more palatable and reasonable than they are.

Case in point: abortion. Within the course of a few days last week, in what looked like a 360-degree turn — that is, one 180-degree turn, followed by another — Romney appeared to first distance himself from his current (but not historical) opposition to reproductive choice, and then reverse himself again to reaffirm his opposition to abortion. The Democratic National Committee and its allies in the choice community went ballistic.

The abortion episode suggests that Romney is happy to risk being labeled a flip-flopper so long as he can send targeted, albeit mixed signals in the hope that different voters will hear what they want to hear, ignore the rest, or presume that Romney is just saying whatever he has to in order to win. And as the New Yorker’s Ryan Lizza reported, Bill Clinton already advised Obama to define Romney as an economic royalist rather than a flip-flopper, so Romney may figure he can twist and contort himself whenever convenient and with impunity.

Imagine you’re a pro-business, low-tax libertarian Republican, for example. You might take Romney’s abortion comments to an Iowa newspaper as a cleverly orchestrated wink to suggest he’s not really going to focus his energies on culture war politics. (And maybe he won’t.) But if you’re a hard-line pro-lifer, you might take those same statements as a dog-whistle designed to lure the sufficient numbers of wary suburban white female moderates to the polls so he can win the presidency and still issue an executive order on Day One reversing Obama’s own reversal by executive order of the so-called “Mexico City” abortion ban. Which is exactly why Romney is being such a weasel on this issue.

Although it may not have been Fehrnstrom’s intent, his Etch-A-Sketch metaphor is apt in another, very important way. Yes, one shakes the toy to erase the existing image and begin drawing anew. But the other joy of an Etch-A-Sketch, unlike a coloring book, is that the open-form medium allows users to draw the world as they see it, unburdened by restrictions. That, in essence, is Romney’s Zelig-like aspiration: To invite all center-right voters, be they hardcore conservatives or libertarian Republicans or fence-sitting moderates, to compose whatever sketch of him they find most appealing — and then vote, accordingly, for him.