A bankrupt battery manufacturer is sure to be a topic in tonight's debate. Here's why Obama shouldn't be afraid 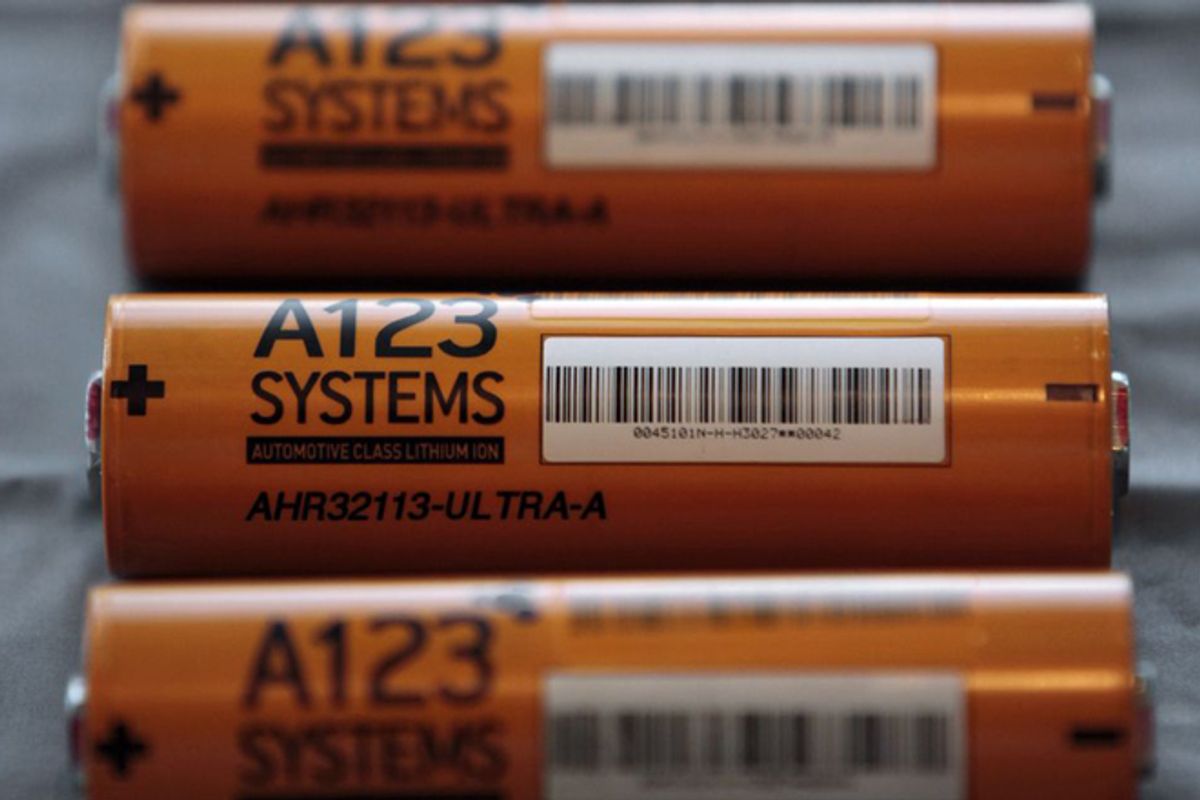 President Obama better be prepared to deliver an aggressive defense of his signature "green jobs" energy policy initiative tonight. On Tuesday morning, A123 Systems, a manufacturer of electric car batteries that received a sizable grant from the Obama stimulus, filed for bankruptcy. The Romney camp, reported the Hill, wasted no time painting the troubled company as a new Solyndra.

"A123’s bankruptcy is yet another failure for the President’s disastrous strategy of gambling away billions of taxpayer dollars on a strategy of government-led growth that simply does not work,” said Andrea Saul, a spokeswoman for Mitt Romney.

Romney is sure to reprise this attack during the debate. Fortunately for Obama, there's no shortage of good responses, helpfully made available by liberal supporters of renewable energy.

For example, once upon a time, advanced battery technology was a bipartisan project. The Bush administration gave A123 a $6 million grant in 2007, and the same Michigan Republicans who are attacking Obama today for wasting money were writing letters in support of A123's eligibility for stimulus grants back in 2009. Romney himself used to support government incentives to develop renewable energy. His current opposition is obvious political opportunism and Obama needs to point that out.

Furthermore, seizing upon a single company's bankruptcy to condemn an entire energy policy willfully misunderstands how innovation works. If the Obama administration had put all of its chips on one company, that would have been stupid. But the Department of Energy gave grants to 29 different companies working in the advanced battery sector. Some of those companies were bound to fail. Some -- we hope -- will succeed. In the case of A123 Systems, another company that received stimulus money, Johnson Controls, agreed to buy A123's assets. The factories aren't disappearing. Consolidation is a normal part of the capitalist process. The weak get weeded out.

Of course, there's no guarantee that the state of Michigan will dominate advanced car battery development in the future. Other countries around the world -- some of which support strategically important industries with far more determination than the U.S. -- are also betting big on batteries. The consolidation currently taking place in the solar power industry offers a good example of what happens when one country -- China -- makes development a priority, while another -- the U.S. -- can't make up its mind.

And then there's the big picture. Betting on battery technology in Michigan is part of a strategy that takes into account America's dangerous dependence on fossil fuels, the threat of climate change, and the steady decay of the Rust Belt's manufacturing sector. It's a triple-play! Explaining why it was smart to invest in A123, whether or not A123 ended up hitting it big, gives President Obama an opportunity to demonstrate how his administration made a good faith effort at tackling some of our biggest challenges.

Industrial policy is hard. Switching over our transportation infrastructure to a system in which vehicles are powered by renewably generated electricity is a huge challenge. There's no guarantee Obama can pull this off, especially when the opposition party has coalesced around an ideological position that denies that there is even a problem worth addressing.

But the very intimidating nature of the challenge makes it all the more important that Obama be forceful in explaining why he did what he did. Romney sees A123 as a point of weakness to exploit. Obama needs to tell America why A123 is a symbol of his resolve -- why it's a visionary attempt to proactively grapple with the future. Let's hear it, with some passion: Climate change is not a hoax. Oil prices will continue to rise. The Midwest needs jobs. When the economy was cratering in 2009, spending government money on a strategy that addressed all three issues was -- and is -- smart.