At last, the president proves he's willing to fight for what he believes -- and flash a little mean streak 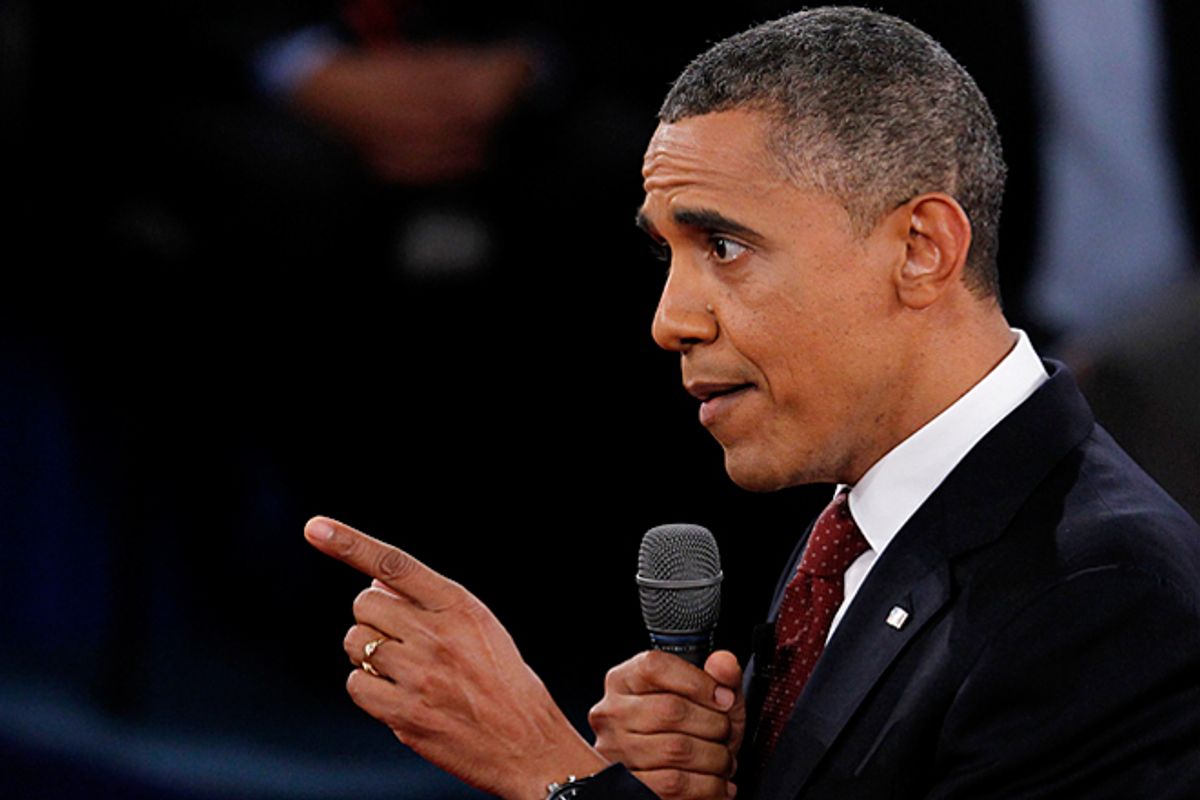 By nature, Barack Obama is a cool cat. But last night, with his job on the line and a confident Mitt Romney surging in the polls, the president showed his claws. His performance in Hofstra University's town hall-style second debate was the moment liberals and Democratic loyalists had wanted to see more of and much earlier from their president.

Prior to the debate, the campaign promised he would be “feisty”; the Romney campaign fully expected they would encounter a tougher Obama. And they did. To rephrase my Salon colleague Joan Walsh’s assessment, the president came out with his claws scratching.

What’s surprising — and quite maddening for many of Obama’s backers — is that the president let the situation deteriorate in the first place to the point where he needed such a strong performance Tuesday night on Long Island. His passivity in Denver two weeks ago was particularly ironic given that his debate prep partner is John Kerry, the failed 2004 Democratic candidate whose feisty-in-his-own-right speeches at both the 2008 and 2012 Democratic National Conventions were greeted by Democratic partisans with a mix of bewilderment and frustration. (“Where was this version of John Kerry when we needed him?”)

Because if there is one hard lesson of modern presidential politics — one painfully learned by a generation of Democrats, in episodes ranging from the Willie Horton ads to the sudden emergence of the Swift Boat Veterans for Truth -- it’s that voters will question the ability of any candidate unwilling to fight back against attacks during the campaign to fight for them in office.

An until-yesterday purring Obama should have learned this lesson five weeks ago in Charlotte from the very man he turned to, albeit a bit grudgingly, to make the case for his presidential performance during the past four years: Bill Clinton. In a significantly ad libbed speech that was hailed almost universally as both highly detailed and thematically broad, both clever and cutting, Clinton eviscerated Romney and running mate Paul Ryan, their critiques of the president, and the broader Republican agenda — and left people wanting more of the same. Few politicians can so artfully demolish opponents; indeed, this is the missing chromosome in the professorial Obama’s political DNA.

Democrats and liberals may recall a similarly anxious moment during the late stages of the 2008 campaign. Coming out of the Republican National Convention and John McCain’s selection of Sarah Palin as his vice-presidential running mate, the Republican ticket briefly led in the polls despite the fact that almost every on-paper factor — the difficulty of any party winning three presidential races in a row; Obama’s significant financial advantage; much higher Democratic voter enthusiasm; the media’s love affair with the story of the mixed-race Obama’s political rise; George W. Bush’s rock-bottom approval levels — clearly favored the Democrats four years ago. If memories are short, surely they remember the unforgettably brilliant captioned photo of Obama that swept through in boxes of nervous Democrats, capturing this moment: “Everyone Chill the Fuck Out, I Got This Shit.”

Which raises the question on every Democrat’s quivering lips four years later: Does the president got this shit (and his shit together) again for the reelection? Given the much closer poll numbers and the fact that the president can’t sell hope-and-change this time around, until last night nervous supporters had legitimate cause to wonder if the president was planning to catnap through Election Day.

Obama’s urgency last night removed any doubts. He worked in some obviously prepared bits, several mentions of Planned Parenthood, a “for it before you were against” it flip-flopping indictment of Romney, and a forceful, Michael Douglas-like “I am the president” rebuke of Romney when the governor tried to rough up the president about his response to the assassination of America’s ambassador to Libya. That was a lion’s roar, not a kitten’s mew.

So now what? There’s one debate left. Aside from what will surely be another regurgitated hairball from Romney on the Libyan terrorist attacks, the subject of the final debate is foreign policy, where Obama’s approval numbers have been net positive from Day One of his presidency. Removing the troops from Iraq is supported by three-quarters of Americans, an unheard of percentage in our polarized nation. Killing Osama bin Laden ain’t too shabby a boast either. (Sidebar: Can you imagine how much Obama’s predecessor — who donned a pilot’s suit and landed on an aircraft carrier to declare victory three weeks into a war it later took eight years, 5,000 lives and still-counting trillions of dollars to eventually lose — would have victory-lapped and grandstanded had he killed bin Laden?)

Meanwhile, Romney’s critiques of the president on security and foreign policy are mostly stylistic, especially since he largely agrees with the president on ending the Iraq war, drone missile use, the 2014 Afghanistan draw-down, Iranian sanctions, America’s support for Israel, and just about everything else except a slight disagreement over the size of the defense budget relative to gross domestic product. That’s why Romney has been reduced to carping about China cheating, even though, as the New York Times pointed out yesterday, complaints about currency devaluation during the past decade have been issued by both Clintons, Bush and, you guessed it, Obama himself. In other words, there just won’t be much room on the scratching pad for Romney to sharpen his own claws in the third debate.

During the final three weeks, of course, Obama could still blow his perilously small aggregate lead in the national polls and lose reelection. An unforeseen event or news story might arise, and maybe the Romney campaign, the Republican National Committee or some affiliated group is waiting to release some damaging opposition research in the waning moments of the campaign.

But for now, at least, it’s still the president’s race to lose, and expect him to therefore mostly (but not completely) return to his usual, cool cat demeanor in the final debate. Still, it was nice to see him get his back up a bit, wasn’t it?