At last, the robust advocacy for women that Obama supporters were dreaming of in a debate 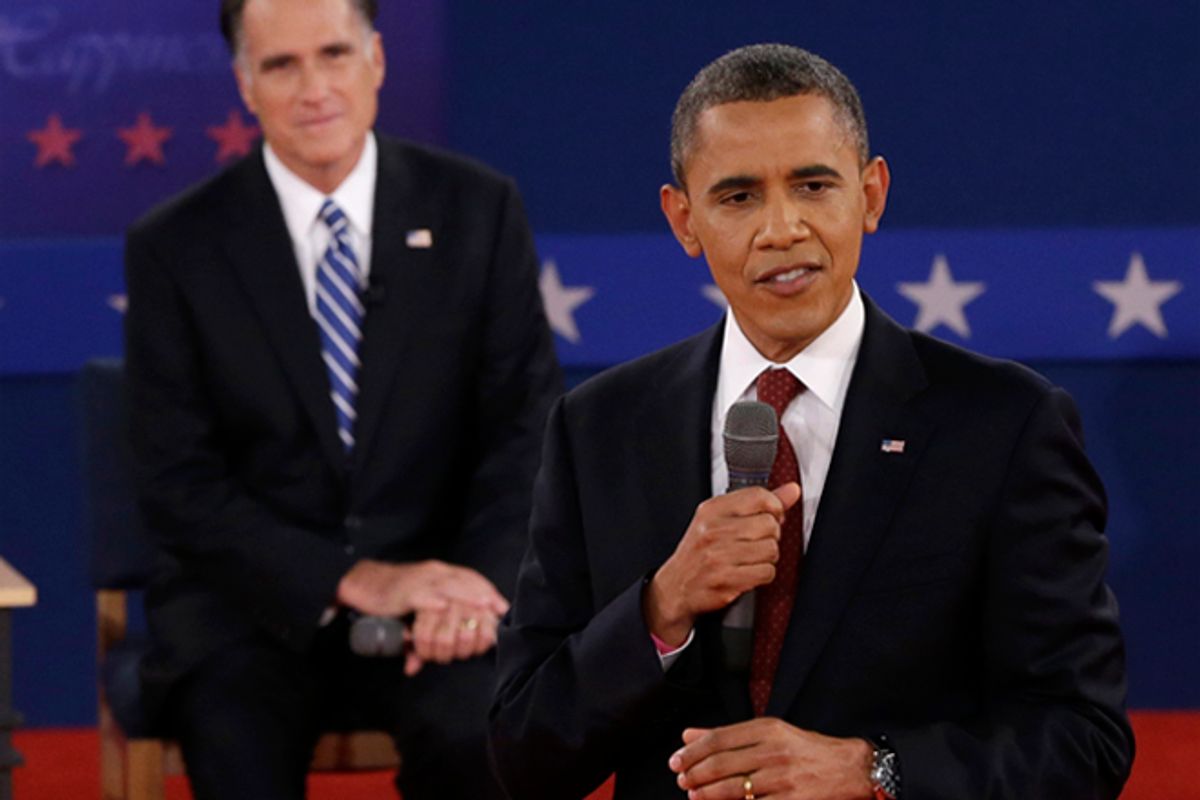 Lilly Ledbetter. Planned Parenthood. Contraceptive coverage as "not just a health issue; it’s an economic issue for women." No one could say President Obama wasn't making a direct approach to women, the one his allies have been begging him to make. He might have just handed the mic to Sandra Fluke -- or Ledbetter herself.

And Romney? He had "binders full of women" that became an instant meme for Obama's re-energized voting base, and he blamed single parents -- women, really -- for gun violence.

The inevitable question about women came, somewhat surprisingly, in the form of a query about the wage gap. Obama was asked by an "undecided voter," "What new ways do you intend to rectify the inequalities in the workplace, specifically regarding females making only 72 percent of what their male counterparts earn?" (Voters who care about inequality are historically torn!) That gave him the chance to talk, more energetically than he did in the last debate, about his grandmother and the discrimination she suffered, and of signing the Lilly Ledbetter Fair Pay Act.

It's an important piece of legislation, though by no means the magic pay-equity bullet it's been talked up to be. Still, it's already miles away from the Republican position, which is to deny that wage discrimination or inequality exists altogether, and to reject any government-initiated solutions to help women sue when they are discriminated against. Hence the irritation on the right when the Romney campaign wasn't able to say where it stood on Ledbetter.  No wonder Romney simply declined to answer the question at all, jumping instead to the fact that women weren't applying to jobs in his gubernatorial administration (paging Sheryl Sandberg) and flexible hours.

Romney couldn't say that there's such a thing as "women's issues" when it comes to anything his government would do -- because that automatically puts him on the wrong side of them. So he was left to lamely finish with, "I’m going to help women in America get -- get good work by getting a stronger economy and by supporting women in the workforce," and to claim, falsely, that he never opposed contraceptive access at all.

Sensing that it might be his last chance -- the next debate is about foreign policy, and barring a Malala Yousufzai question, it just might be -- Obama threw in almost all of his other pitches to women, including student loans, Obamacare's contraception coverage, the Romney plan to defund Planned Parenthood, the childcare tax credit. (Abortion rights, or the Supreme Court, did not come up this time around, that having been Joe's job.)  Obama said the healthcare provided to low-income women at Planned Parenthood is a "pocketbook issue for women and families all across the country. And it makes a difference in terms of how well and effectively women are able to work," adding, "One of the things that makes us grow as an economy is when everybody participates and women are getting the same fair deal as men are."

Both men sought to inject gender into the debate as often as possible, outside of that explicit question. Obama brought up Planned Parenthood any time he could, with a total of five mentions in the debate, including pointing out that Romney is to the right of George W. Bush on defunding the organization. Romney tried, tentatively, to mention an early gambit by his campaign to blame female economic woes on Obama, saying, "In the last four years, women have lost 580,000 jobs." Inconveniently, the vast majority of those jobs women lost were in the public sector, and overwhelmingly at the instigation of Republican elected officials.

Perhaps Romney's lowest point on this topic was when he was asked about gun control, a subject on which neither candidate has much credibility. Romney changed the subject as fast as he could to single parents, by which he clearly meant single mothers, by which he clearly meant single mothers of color. In a wild careening soliloquy that started with education, he ended with this: "We need moms and dads helping raise kids. Wherever possible, the -- the benefit of having two parents in the home -- and that’s not always possible. A lot of great single moms, single dads. But gosh, to tell our kids that before they have babies, they ought to think about getting married to someone -- that’s a great idea because if there’s a two-parent family, the prospect of living in poverty goes down dramatically. The opportunities that the child will -- will be able to achieve increase dramatically."

Forget, if you can for a moment, the absurd jump from gun violence to stigmatizing single mothers without a shred of evidence. (Clearly, he wished Charles Murray was on hand to answer this question about guns.) What does Mitt Romney have to offer those often-vulnerable female-headed households? Except further marginalizing them by taking away their healthcare with cuts in Title X and Medicaid or repealing the Affordable Care Act? Cutting their jobs in the public sector? Denying them the right to decide the size of their families or to legal recourse from discrimination? He'll tell them that "they ought to think about getting married to someone." You don't need a binder for that kind of thin and inadequate solution.