Obama to Romney: You're rich

The president proves class warfare can be very effective, when executed correctly 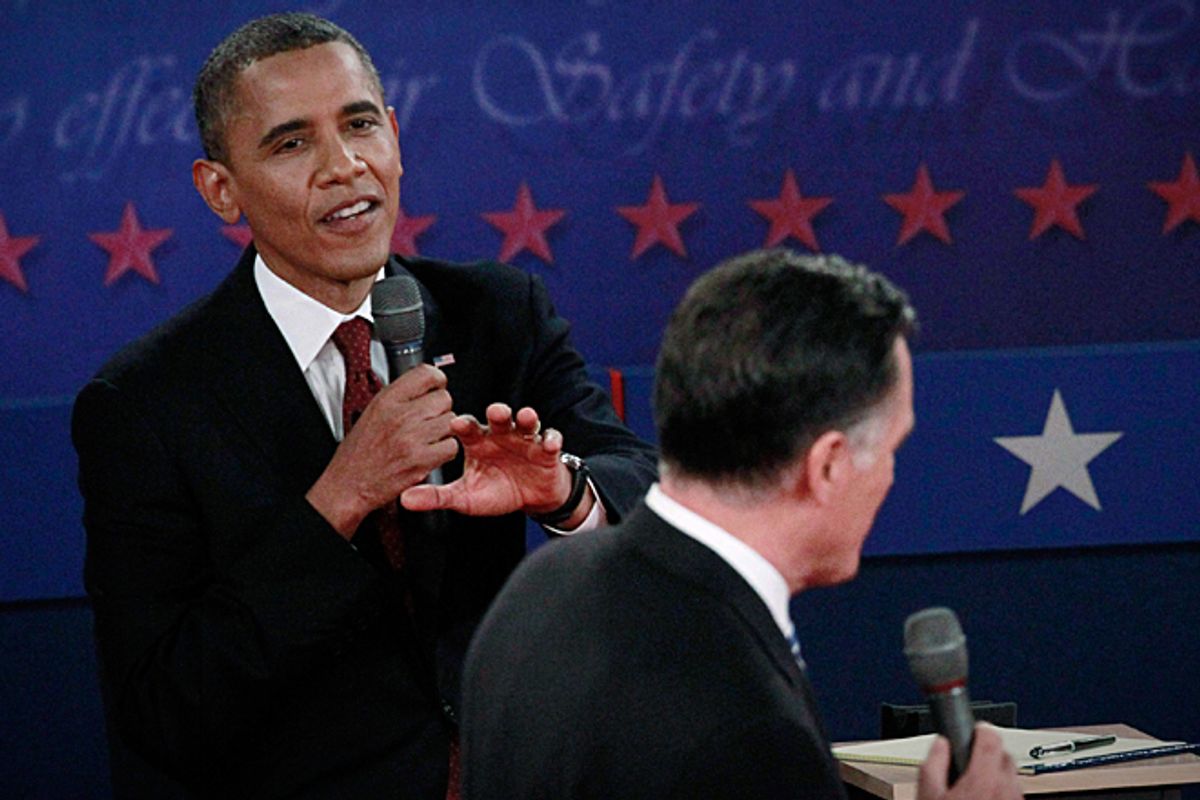 It was a little bit of an odd pitch for a guy whose entire premise is "vote for me because I'll create more jobs," but whatever. By the end of the debate, Romney was off his game and rattled. He appeared flabbergasted at what had just happened.

As well he should have been. On the economy, Romney stuck to exactly the same script that had worked so well in the first debate -- he repeatedly emphasized his favorite unemployment talking point: "23 million Americans are out of work." At every opportunity he stressed how "the middle class" had been "hammered" and "crushed." He noted how this year's economic growth rate was slower than last year's. He delivered some of his most effective lines of the night in response to a question from an African-American man who had initially asked President Obama why he should be excited about the prospect of a second term. Romney said the questioner shouldn't be excited at all, because, "if you elect Obama you know what you are going to get ... The president has tried but his polices haven’t worked."

And yet, there he was, in the end, looking red-faced and angry.

Part of the reason for this had nothing to do with the economy at all. Romney stumbled badly on Libya, immigration and the issue of equal pay for women in the workplace, giving both Obama and the moderator, Candy Crowley, ample opportunity to fact-check him. I lost count of the number of times in which Obama basically said Romney was a liar, and the cumulative effect of the presidential put-downs clearly got under his skin. Instead of looking assured, Romney looked arrogant.

My guess is that this is not a moment in time when Americans are amicably disposed toward rich people acting uppity. A key interchange came after Obama had accused Romney of investing in Chinese companies. Romney responded that the investments were part of a blind trust that he had no control over, and tried to turn the tables by noting that Obama's pension probably included the same investments. "Have you looked at your pension?" he badgered the president. "Have you looked at your pension?"

At first, Obama refused to respond. Then he smiled: "You know, I -- I don't look at my pension. It's not as big as yours so it doesn't take as long."

It was a cheap point, but telling. As was, during a mostly cumbersome exchange on tax policy, Obama's direct attack on how little Romney paid in taxes.

Now, Governor Romney has a different philosophy. He was on "60 Minutes" just two weeks ago and he was asked: Is it fair for somebody like you, making $20 million a year, to pay a lower tax rate than a nurse or a bus driver, somebody making $50,000 year? And he said, "Yes, I think that's fair."

The coup de grace came during the closing statements, when Romney made a huge unforced error by asserting that he cared for 100 percent of Americans, thus offering Obama the perfect opportunity to frame his own closing statement around Romney's 47 percent comments. With the last word in the debate, the president reminded viewers that Romney had already written off half of all Americans.

On the economy, Obama's weakest point is the unavoidable fact that the economy has performed poorly over the last four years. But Romney's weakest point is that he is a representative of the economic class that has flourished through good times and bad, and that has benefited most from changes in tax structure and deregulation. In the second presidential debate, Obama managed to effectively place Romney in that framework. He waged class warfare, and he won.