Mitt Romney creates another instant meme, and reveals how clueless he is — again! 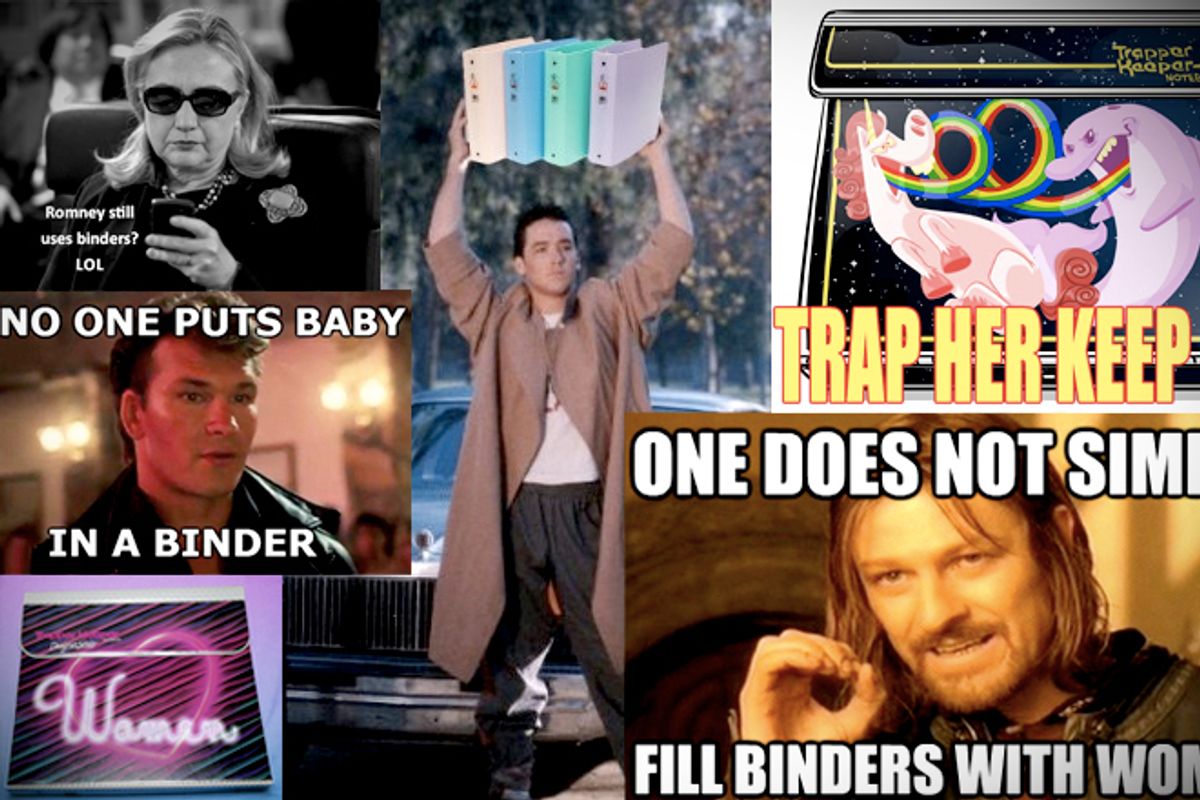 In a heated, divisive election year, if there's one thing Democrats, Republicans and the undecided can agree on, it's this: We're pretty much just watching the debates for the memes now.

You know it the easily exploitable moment it happens. It's when Mitt Romney trains his cool cyborg eye on Jim Lehrer and says, "I’m sorry, Jim, I’m going to stop the subsidy to PBS. I like PBS. I love Big Bird." It's when Uncle Joe from Scranton cannot keep a straight face around the guy with the backward baseball cap. It's when a candidate declares his commitment to moving women forward in the workplace by stating, "We took a concerted effort to go out and find women who had backgrounds that could be qualified to become members of our cabinet.  I went to a number of women's groups and said, 'Could you help us find folks?' And they brought us whole binders full of women."

It was such a gloriously surreal statement, such a peculiar way of compartmentalizing the sex that represents over half the American workforce, and frankly such an uncomfortable-sounding proposition, it all but begged the American people, "Meme me."

And lo, there was the Facebook page. With thousands of "likes" before morning broke. Behold, Romney's Binder's Twitter account, declaring happily, "Boy, I'm full of women!" And the Tumblr. Oh, the Tumblr. Lloyd Dobler, proudly holding aloft a stack of binders. Beyoncé, telling us to put three rings on it. Thank you, Internet. Between this and the drinking games, I really think we're going to get through this year.

For all the inherent whimsy of the debate memes, there's always a hard kernel of genuine righteous anger and concern within them. At their heart, they reflect a very real alarm at the notion of interfering with public broadcasting, or a legitimate, fact-checking in real time disgust with the opposition's misstatements.

Likewise, Romney's noblesse oblige response to a question about women in the workplace with an anecdote about how he went out and, gosh darn, found himself some ladies for his cabinet provoked a strong response because it reeks of classic Romney condescension. When he explained to the Town Hall questioner that he has a staffer who told him, "I need to be able to get home at 5 o'clock so I can be there for making dinner for my kids and being with them when they get home from school," it was telling, not because flex time isn't an important issue but because, dude, you had two minutes to discuss women's progress and you spent it congratulating yourself for the extraordinary effort you had to make to hire women, and how they need to get home to make dinner. Oh, and here's a huge shock: Romney did not, in fact, actively solicit those now infamous binders.

What else are we supposed to do with something like that but laugh? Laugh with the unself-conscious abandon of Joe Biden. And to tell the world, if you're looking for women, guy, it's not really that hard. Don't look for us in binders. You'll find plenty of us soon enough in the voting booth.