Is Minnie too skinny? 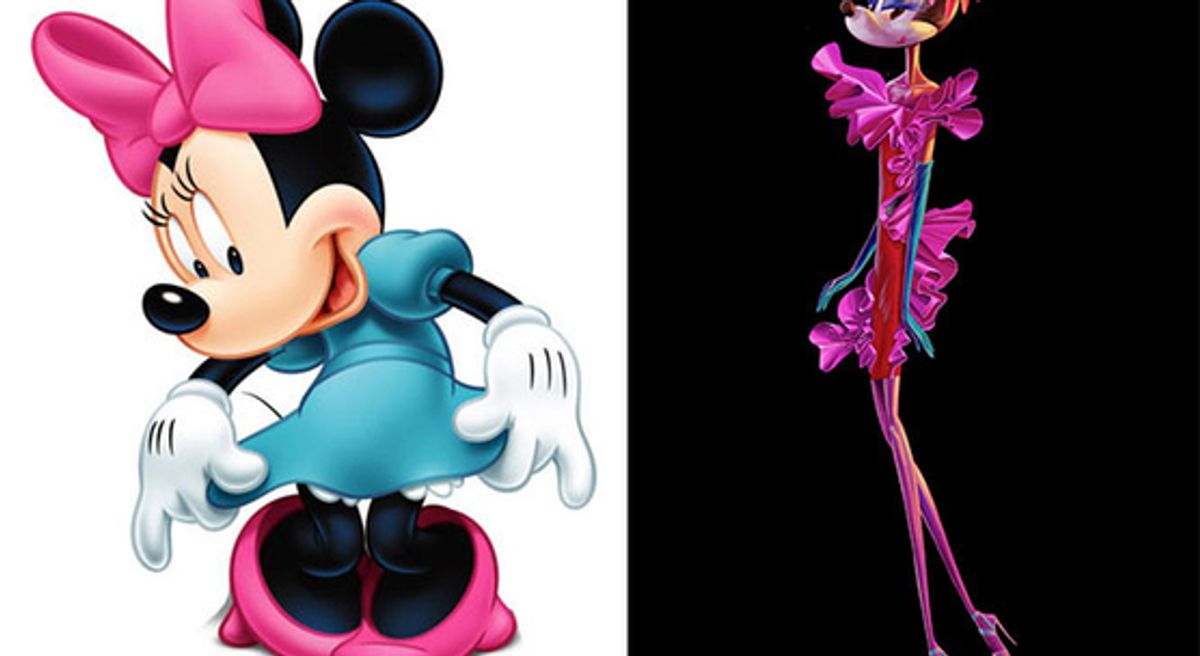 Fashion-forward, notoriously pricey department store Barney’s New York has “embraced” pop culture by unveiling plans to present Disney characters in haute couture for its holiday window display. But these iconic cartoon bodies are now stretched so thin and tall that they resemble unrecognizable cartoon toothpicks rather than the corporate but cute Minnie, Goofy and Daisy Duck beloved by the children of the world.

"When we got to the moment when all Disney characters walk on the runway, there was a discussion. The standard Minnie Mouse will not look so good in a Lanvin dress. There was a real moment of silence, because these characters don't change. I said, 'If we're going to make this work, we have to have a 5-foot-11 Minnie,' and they agreed."

Okay, so Minnie is a cartoon, it’s true. As a result of her new image, anthropomorphic mice across the nation will not all of a sudden be stricken with self-hate, playing with the peas on their plates and declaring they just can’t eat another bite, while visualizing the numbers on the scale dropping rapidly.

Disney's evil consumerist influence on the world aside, Skinny Minnie epitomizes our society’s whacked-out relationship with body image, doesn’t she?

Besides, these kinds of absurd campaigns do have an effect on young women (and everyone). While cartoon characters can be whittled, stretched, and made over, people can’t.

That’s why a petition on Change.org to urge Barney’s to reconsider the image already has over 122,000 signatures. From its text, by petition creator Ragen Chastain:

There is something wrong with changing a beloved children’s character’s body so that it looks good in a dress that almost nobody looks good in -- adding to the tremendous pressure on young girls and women to attain photoshop perfection. The problem isn’t with Minnie’s body, it’s with a dress that only looks good on a woman who is 5’11 and a size zero.

That little girl who is going to become a 5’4, size 12 woman can’t just become a 5’11, size 0 woman when she wants to fit into a dress that was designed by someone who couldn't be bothered to make a dress that looks good on someone who is not a model.

Statistics show that over 80% of 10-year-old-girls in the US have already been on a diet and as many bloggers have already noted with rueful irony given the Disney connection, that much of the young female population would squander a hypothetical magic wish on becoming thinner.

Many of these girls responding to such surveys will suffer agonies over their weight and body images for at least a decade, maybe two, as they internalize messages like Skinny Minnie and Photoshopped images of celebrities and models.

The Skinny Minnie fiasco is just one of a handful of recent high-profile controversies over weight, diet and body image issues for women.

Pop star Lady Gaga has responded to photos of her looking like she gained weight--and accompanying vicious comments--with a “Body Revolution 2012" campaign and an admission that she has struggled with eating disorders since she was a teenager. She encouraged her fans to post pictures of themselves celebrating their "triumph over insecurity" and thanking Gaga for her honesty.

Eating disorder experts were quick to weigh in, telling MTV that they thought Gaga was taking a positive step by being open about her own issues and the painful criticism she has received about her looks, and especially creating a supportive space for her fans.

Whether Gaga’s new admission and campaign is helpful or harmful or a mixture of both, the fact that so many celebrities are admitting eating disorders--and the way those eating disorders are discussed in public-- shows how far we have come. As Katie J.M. Baker notes,

These stars are almost always women, and they are almost always "better" by the time they make a public statement. They are also almost always slender. Just this week, Katie Couric admitted that she had "wrestled with bulimia all through college, and for two years after that." Kelly Clarkson has also talked about her struggle with bulimia: "One of my guy friends caught on to [my eating disorder], and I just felt so ashamed and embarrassed," she said. "I literally went cold turkey and snapped out of it." Ashlee Simpson and Snooki have both said their parents helped them quit starving themselves. Brandy said she was miserable as a teenage popstar and was "not eating properly, not eating at all, diet pills, regurgitating, and all of these things that girls do."

The problem with posing these behavioral and mental problems--which deserve serious attention--as “things that girls” do, as a painful but ritual part of growing up, is that we normalize the obsessive desire to be thin as an ordinary phase women go through rather than something we need to combat aggressively.

Still, this candor isn't all bad, and other encouraging signs can be found on television.

At the New York Times this weekend, Alessandra Stanley observes a changing trend on TV of actresses and female comedians who don’t care much about their weight, one way or another. This, she says, is a real revolution:

And that is what’s so seditious about comedians like Ms. Dunham and Ms. Kaling: Their weight is no big deal. They can be a little defensive when people ask about their extra few pounds, but they don’t let it deter or define them. To prepare for a blind date Mindy changes her outfit, not her dress size. Ms. Dunham has Hannah prance around her apartment in her underwear, unself-conscious.

That’s ultimately the goal for pushing back against toxic body culture, no matter what form it takes. Instilling a lack of self-consciousness, an ability for young people to move their bodies through the world with joy and not subject themselves to endless scrutiny. Lady Gaga’s Body Revolution movement and the petitioners taking on Skinny Minnie have the right idea.