Newsweek off the presses and into the ether 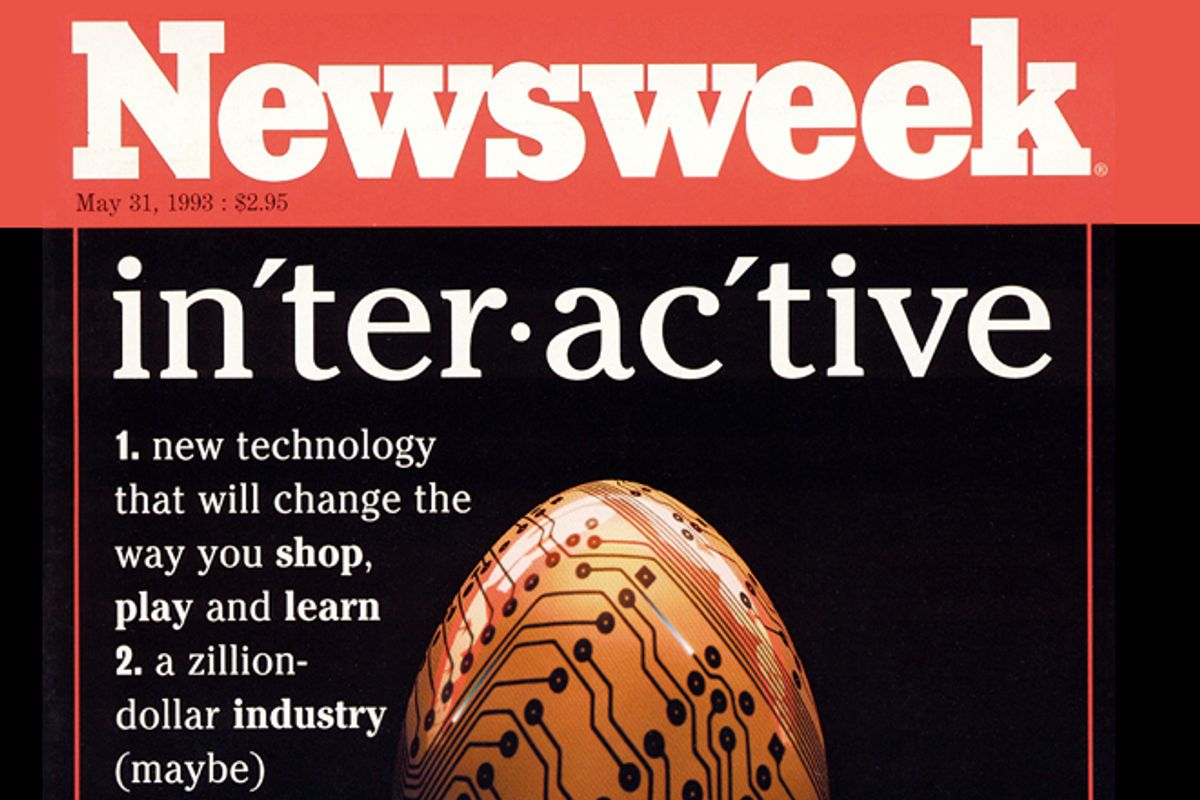 But … But … What incendiary printed matter are we going to flip through at the dentist's office now? On Thursday, editor Tina Brown and CEO Baba Shetty announced on the Daily Beast that Newsweek is going all digital. The Dec. 31 issue will be the final issue to roll off the presses.

It is, as most things Tina Brown–related are, a breathless, truly fabulous statement of intent. "Newsweek Global, as the all-digital publication will be named," the announcement reads, "will be a single, worldwide edition targeted for a highly mobile, opinion-leading audience who want to learn about world events in a sophisticated context." I feel like there might be a test to get a subscription. Godspeed, readers, who will now have to access your Muslim rage and your racist baby and your gay Obama who needs to hit the road in your highly mobile, sophisticated context way. Whatever that is. Not mentioned: declining ad pages and the fact that as recently as last March, Brown was admitting, "We aren’t making money yet and we won’t make money for another couple of years."

As an online veteran, I can't help but greet the news with a nostalgic gaze back toward the mid-'90s, when Salon was new and the question I heard most often was, "So when are you guys going to be able to put out a paper edition?" And while it's been a generation since those heady early Internet days, when the default assumption was that paper meant you'd made the big time, the amazing truth is that it's a prejudice that persistently crops up.

I was at an event yesterday where I was introduced around by people my age and younger, people who've spent the past two decades now immersed in online culture, as a blogger. Not that blogger is a term of disparagement, but there is still, in this day and age, a strong whiff of hobbyist to it. (Or more horribly, Matt Drudge.) That one might actually do this professionally, on the Internet, still doesn't quite jibe with the deeply embedded ideal that the end result of journalism is a newspaper at a kiosk or a book at a — I know, it's crazy — store.

So for Newsweek to announce – with a mix of brave new world enthusiasm and just a hint of menace – that "we must sustain the journalism that gives the magazine its purpose and embrace the all-digital future" represents an acknowledgment of the digital world in which we already live, and the all but inevitable demise of paper.

It's taken long enough. It was only in 2008 that the Pulitzer Prize acknowledged online journalism as eligible for inclusion. It was only last year that Pulitzer Prizes moved to an all-digital-submissions format, and just this spring that the Huffington Post scored a win.

The days of sitting in the bathtub with a magazine and a beer are, someday very soon, going to be the days of just sitting in the bathtub with a beer. What that means for news is growing acceptance of the basic reality that there are no longer old media and new media. You can't get a much plainer declaration of that than a nearly 80-year-old magazine's announcement. With that shakeup, Newsweek moves online journalism one step away from its absurdly outdated — yet remarkably enduring — reputation as mere scrappy upstart. Yet it also simultaneously minimizes it. It's not until the eighth paragraph of the announcement that Brown and Shetty get around to mentioning: "Regrettably we anticipate staff reductions and the streamlining of our editorial and business operations both here in the U.S. and internationally." Journalism is changing, and not just in the format in which it's presented. It's also changing in the discouraging, ominous news that over at one its most venerable institutions, come January, fewer people are going to have a job doing it.