Hitchcock's obsession with his leading lady Tippi Hedren ruined her career. And threatened to ruin her life 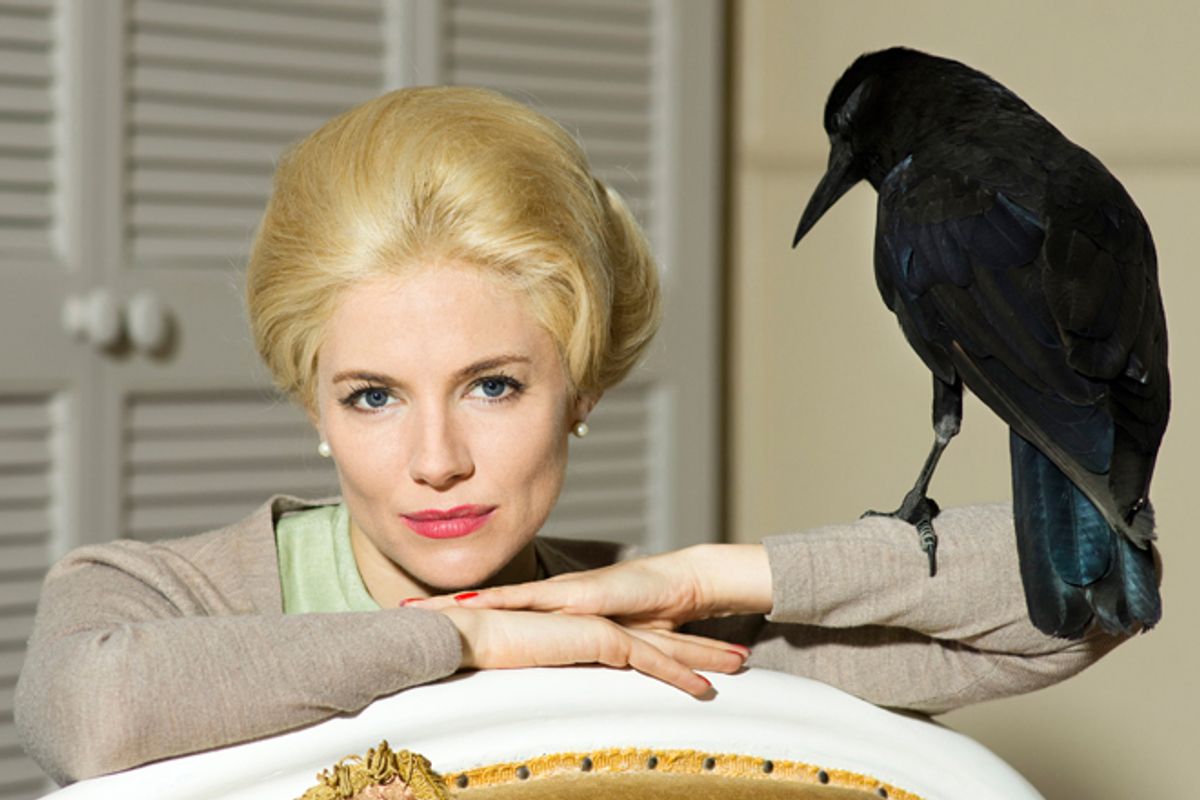 One of the joys of watching an Alfred Hitchcock film was awaiting his fleeting cameo. It set the tone for unease and tension. His thoroughly creepy demeanor was one of his most celebrated qualities — it was an integral part of the filmmaker’s image. The full extent of his predatory creepiness, though, was something he kept to himself.

Donald Spoto, who wrote so glowingly of Hitchcock’s films and life while he was alive, told the darker tales once the director died in 1980 in books like “The Dark Side of Genius” and “Spellbound by Beauty.” Those are source materials for the new HBO film “The Girl,” about his menacing of Tippi Hedren on the set of “The Birds” and “Marnie.” But Hedren is also around to advise on recounting the shameful tale.

An unknown model at the time, Hedren was selected from a TV commercial appearance because she fit the mold of icy blondes Hitchcock had been using in his suspense films, from Grace Kelley to Kim Novak to Janet Leigh, who had just appeared in his biggest hit, “Psycho.” To follow that with an unknown in “The Birds” meant mentoring the single mother, teaching her film acting and her way around a major Hollywood set. Then he pounced.

“It was perfect to have someone as brilliant a genius as Albert Hitchcock being my drama coach,” Hedren, at 82, recalled to reporters at the TV Critics Association summer press tour in August, carrying a stuffed crow as prop. “Hitchcock had a charm about him. He was very funny at times. He was incredibly brilliant in his field of suspense. I learned so much from that man about motion pictures, how you make a motion picture.”

But then came the advances.

“The Girl,” directed by Julian Jarrold, adds a patina of Hollywood glamour and a cineaste’s penchant for behind the scenes detail to what might have otherwise been another women in peril Lifetime movie. Casting is key to most HBO films, and this one features Sienna Miller, a model before she became an actress herself, just right as the Nordic blank slate with an unexpected moral core that was Hedren. The chameleon-like Toby Jones, who was the voice of Dobby in “Harry Potter” and portrayed Truman Capote in “Infamous,” puts on some prosthetic heft and nails the slow, breathy Hitchcock voice.

Though Bodega Bay in Northern California retains much of the look it had during the 1962 filming of “The Birds,” its distinctive schoolhouse and church still standing, the entirety of “The Girl” was shot in South Africa probably for budgetary reasons, replicating the California coast on a shore not far from Cape Town. It works, too.

And yet the background tends to fade away from the central drama of Hitchcock’s single-mindedness, brooding and blurting increasingly vulgar limericks as if they were an aphrodisiac, pressing himself on her and, in the most shocking scene, having her pecked mercilessly and repeatedly by crows in the attic before the days of CGI.

“It was difficult during certain scenes,” Miller said. “But not nearly as difficult as it was for Tippi. The bird attack scenes took five long days for her, and it was about five hours for me. So while I definitely suffered a little bit, it was nowhere near the real thing.”

A kind of Scandinavian stoicism sustains them both. For Hedren, it was the determination to make the most of the opportunity to star in these high-profile films by a top director as a way to support her daughter, Melanie Griffith. She couldn’t report the inappropriate sexual advances and she didn’t tell others either. “Studios were the power,” Hedren said this summer. “And there was absolutely nothing I could do legally whatsoever. There were no laws about this kind of a situation. If this had happened today, I would be a very rich woman.”

Instead, she stayed. And to continue a seven-year contract, starred in his next film, “Marnie.” What may have been more troubling than Hedren putting up with the behavior was the enabling of the women around Hitchcock — his wife put up with the flirtations and was often present for them as the three of them dined; his assistant lined them up. A couple of strong actresses, Imelda Staunton and Penelope Wilton (Mrs. Crawley from “Downton Abbey”), portray the women who had been stocking these binders of blondes for Hitchcock over the years.

“There is a note of glamour to all of that,” the real Hedren said of being in the line of his leading ladies. “The Hitchcock blondes are kind of revered in the motion picture business, which is always an honor. They’re always very sophisticated. They have a sense of humor. They’re sexy. They’re interesting women. I don’t mind being one of those.” But of Hitchcock, who got so brazen, she says, “I think he was an extremely sad character.”

Whatever was at the root of his dark obsession, Hedren said, it wasn’t love. “When you love someone, you treat them well. I think we’re dealing with a mind here that is incomprehensible, and I certainly am not capable of discerning what was going through his mind or why. I certainly gave no indication that I would ever be interested in any kind of a relationship with him.”

Screenwriter Gwyneth Hughes conducted original research to augment the adaptation of Spoto’s book. And as accurate as it seems to be in detail, “The Girl”  doesn’t have the kind of arc or dramatic shape to be completely satisfying. She took the abuse for a while, and then she didn’t, insisting to be released from her contract, though it meant she couldn’t work again for years.

“I lived through it,” she said. “He ruined my career, but he didn’t ruin my life.”

And though she’s managed to put it all mostly behind her, Hedren said, “actually viewing the film, I have to say that when I first heard Toby’s voice as Alfred Hitchcock, my body just froze.” Following a screening of “The Girl” for family and friends, Hedren says, “at the end of it, nobody moved. Nobody said anything until my daughter, Melanie, jumped up and said, ‘Now I have to go back into therapy.’ ”

But “The Girl” is also meant to bury a Hollywood that should have never been tolerated. “I hope that young women who do see this film,” Hedren said, “know that they do not have to acquiesce to anything that they do not feel is morally right.”

“The Girl” premieres Saturday at 9 p.m. on HBO.