CEOs may fear the expiration of the Bush tax cuts. But from jobs to home values, average Americans are doing better 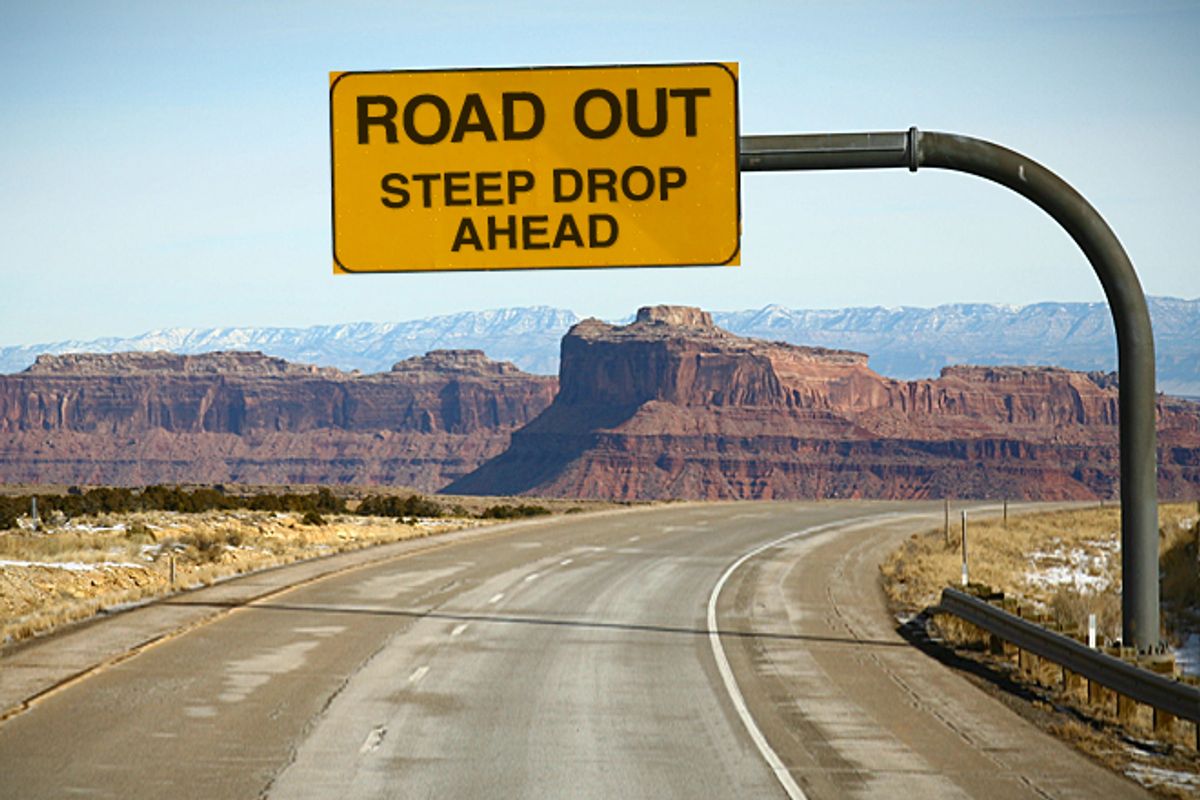 For economy geeks, the New York Times headline on Aug. 6, "Fear of 'Fiscal Cliff' Has Industry Pulling Back," was a punch in the face. For anyone hoping a recovering economy would ease President Obama's path to reelection, the thrust of the article was positively chilling.

You didn't need to read past the opening paragraph to get the gist:

A rising number of manufacturers are canceling new investments and putting off new hires because they fear paralysis in Washington will force hundreds of billions in tax increases and budget cuts in January, undermining economic growth in the coming months.

"Everyone is sitting back and hunkering down," said Kellie Johnson, the owner of an aerospace company in Torrance, Calif.

The fear seemed justified. If Congress takes no action between now and Jan. 1, a massive package of tax cuts -- including those passed during George W. Bush's first term in 2001 and 2003, as well as an array of cuts orchestrated by Barack Obama -- will simultaneously expire. Extended unemployment benefits will run out, and drastic, brainlessly indiscriminate across-the-board spending cuts in both domestic programs and national defense will kick in.

The good news, according to the Congressional Budget Office, is that the "fiscal cliff" will dramatically improve the nation's balance sheet, reducing the annual deficit by more than half a trillion dollars. The very bad news is that the sharp contraction in government spending, combined with significant tax increases on the vast majority of Americans, would likely cause a recession in 2013, and push unemployment back up over 9 percent.

The timing of the Times story turned out to be depressingly perfect -- at that very moment, an abundance of data points started confirming that the U.S. economy was slowing down. The government reported a disappointing  jobs number for August. Second-quarter economic growth was estimated at a pallid 1.3 percent. Big ticket business spending on durable goods slumped sharply in both August and September, and the steam evaporated out of the manufacturing sector.

Economists couldn't say for sure whether to blame everything on the impending fiscal cliff -- other potential villains included Europe's  slide toward recession and China's big slowdown -- but the overall trend did not bode well. A survey of CEOs conducted by the Business Roundtable in late September confirmed the grim prognosis:

...Only 29% of CEOs surveyed expected employment at their companies to grow in the next six months, compared to 34% that expect headcount to decline.

"The closer you get, the more nervous you get," Mr. McNerney said.

Then came October. The government reported that unemployment fell to 7.8 percent, and the most recent jobs figures indicated that third-quarter business hiring had grown faster than during the second quarter. Car manufacturers reported that Americans bought more automobiles in September than at any point since the crash. Housing starts surged at their fastest pace since early 2008, confirming numerous reports that the housing sector had finally reached liftoff. Consumer confidence blossomed. On Thursday, the Conference Board's survey of leading economic indicators rose by 0.6 percent, the most in seven months. Retail sales are growing. There are even some nascent signs of a manufacturing rebound. Taken altogether, it's hard to think of a month during Obama's entire term in which the data have looked more fundamentally positive.

But the fiscal cliff still looms. CEOs are still panicking. Taxamageddon is nigh. What in the world is going on?

There are a couple of theories. If you're conspiracy minded, you could be tempted to wonder whether CEOs are playing a little game of extortion: demanding that Congress make a deal preventing tax hikes or else they'll sabotage the economy.

If true, this is execrable behavior. Because these jokers should know better. Experience tells us that the lame-duck Congress will come to a deal at the last moment, just as they always do. Congress and the White House will not willfully plunge the country into another recession.The only question is which side will have more leverage during the mutual arm-twisting that will come after the election. Right now, President Obama is threatening to play hardball -- on Thursday he announced he would veto any legislation that attempted to keep all of the Bush tax cuts in place. But he's talked tough before, and if he loses the election, he will be under huge pressure to concede to Republican wishes.

Any CEO playing the extortion game under these circumstances is just confirming what we already suspected about the people running corporate America: They hold their own bottom line to be more important than the country's welfare.

If we're inclined to be more charitable, however, we might concede it's still the CEO's job to look ahead and try to evaluate and prepare for future adverse conditions -- and there is undeniably great uncertainty as to what exactly will happen. Fear and doubt may be encouraging some decision-makers to stand pat. That's not necessarily crazy or evil.

But it might be dumb. Average Americans, in contrast to the CEOs, are reacting aggressively to real changes in their own current standard of living. They are not hunkering down. After four long years of scrimping and saving and refinancing and paying down their credit card bills, they've shed a lot of their overhanging debt. Their net worth is finally improving as their homes start to appreciate in value. The job market is better. In every part of the U.S. economy that depends on the consumer, the data are flashing a green light.

The change in circumstances may be coming too late to materially affect the presidential election, but that doesn't it make it any less real. In fact, some analysts are beginning to think that the recovery might be so healthy that it could even dampen the horrendous impact of going over the fiscal cliff.

While uncertainty over the fiscal cliff dominates most conversations, the relative strength of the underlying U.S. economy should not be forgotten. The expansion is today on firmer footing today than at any point in the past three to four years. No major economic imbalance exists. Moreover, headwinds that have hindered the pace of recovery are fading.

The bottom line is that the US economy may be better positioned to withstand greater fiscal drag than many currently believe. While going over the so-called fiscal cliff (in its entirety) would almost certainly lead to a sharp contraction in economic activity in early 2013, the improving economic base we now observe leads us to conclude that such a downturn would likely be short-lived.

Let's think about that for a second. Let's suppose that there is some truth to the argument that businesses are hunkering down. If so, then they are doing so in defiance of the real economic trends currently at play. They are, in effect, artificially throttling back the economy just at a point when it is ready to accelerate. They may even be putting themselves in a position where they turn out to be ill-equipped to deal with growing demand.

So if Washington does figure out a deal before the deadline arrives, businesses will suddenly have to play catch-up. An already expanding economy will get a turbo-boost.

There are huge implications here for the political dynamic. Obama has promised to end the Bush tax cuts for the rich before, but at the critical moment he has always buckled. And there was at least one good reason for that: Raising taxes when the economy is in recession isn't what the fiscal stimulus doctor ordered.

But if the economy is accelerating instead of contracting, the equation changes. We're talking speed bumps instead of roadblocks. In a rapidly growing economy, the wealthiest Americans would hardly feel a jump back to Clinton-era tax hikes.

Imagine that. Corporate America takes off the brakes, the economy surges, and the wealthy pay more taxes. The deficit would start to tumble. We could start arguing about other things besides economic policy for a change.

So maybe we should be welcoming the imminent fiscal cliff instead of fearing it. The closer that fatal day comes, the sooner the deal that avoids it will arrive, and the more quickly "certainty" will pervade the marketplace. The big remaining question is simply who gets to enjoy the benefits of the new state of affairs: Romney, or Obama?