The Who's legendary guitarist saw art in destruction. Revelations in his memoir of being abused might explain why 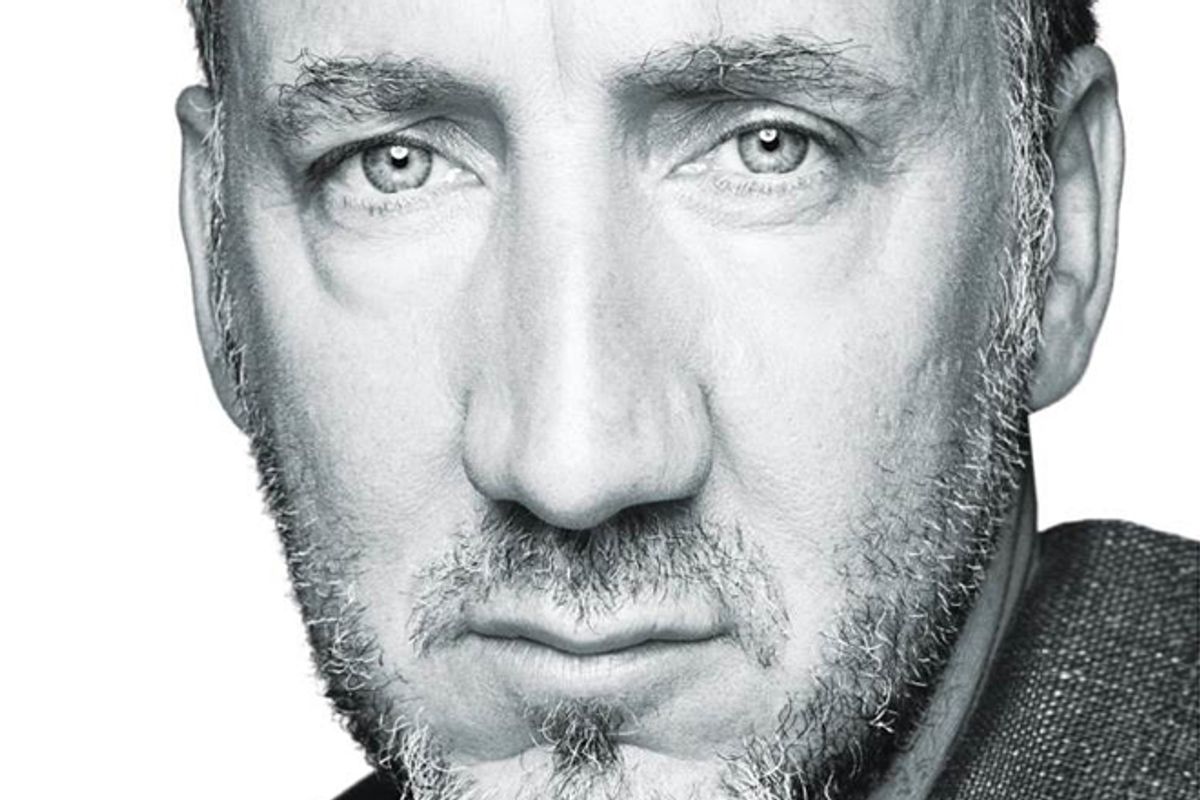 Pete Townshend, guitarist and principle songwriter for the Who, opens his new memoir, the inevitably titled “Who I Am,” with an act of destruction, not creation. It’s June 1964, and the band is playing one of its first gigs in West London. The set list is mostly R&B covers, and 19-year-old Townshend is making an unholy noise on his Rickenbacker when he “feel[s] a terrible shudder as the sound goes from a roar to a ratting growl; I look up to see my guitar’s broken head as I pull it away from the hole I’ve punched in the low ceiling.” Rather than stop the show, he smashes more holes in the ceiling and splinters the neck. “I hold the guitar up to the crowd triumphantly,” he writes. “I haven’t smashed it; I’ve sculpted it.”

It’s a big moment for Townshend. He has devised, quite by accident, one of the Who’s signature moves. It’s a bracing opening, although he could have launched “Who I Am” from almost any point in his career, such as the day he met childhood friend and future bandmate John Entwhistle, or the moment when Roger Daltrey invited him to join the Detours. He might have opened by describing the burst of creativity that resulted in the opening chords for the Who’s first hit, “I Can’t Explain,” which remains one of rock’s best riffs, or by recounting how he devised the Marshall stack. He could have related his introduction to spiritual master Meher Baba (whose influence guided almost all of Townshend’s output) or recounted the show where he first made his patented windmill move (he stole it from Keith Richards, who used it to get limber before shows). That’s how influential the Who have been these past 48 years: There are so many moments that not only defined the band but determined the course of rock 'n' roll.

Destroying that Rickenbacker in 1964, however, has special significance — and not only because it became such an expected part of any Who show that audiences booed when the instruments survived the final song. Townshend was part of a generation of British rockers who integrated rock 'n' roll with their art school pursuits, with new ideas espoused by such artists as Peter Black and Larry Rivers. Townshend was a fan of cellist Malcolm Cecil, whose spirited performances often damaged his instrument, and a follower of Gustav Metzger, a pioneer of auto-destructive art. That idea is of utmost importance to Townshend, and smashing his guitar became not only a powerful expression of youthful angst and a means of conveying those ideas through rock music. Townshend destroyed the very medium of his performance, which on one level refocused the emphasis on the moment rather than the record. (In that regard, it seems ironic that their "Live at Leeds" remains one of rock’s best concert documents.) “We advanced a new concept,” he writes. “Destruction is art when set to music.”

For Townshend, creation was a form of destruction, an idea that illumines the best parts of “Who I Am.” It has its roots in postwar fears, as his was the first generation born during and immediately after World War II, and that event definitively shaped their worldview. “I wasn’t trying to play beautiful music,” he writes. “I was confronting my audience with the awful, visceral sound of what we all knew was the single absolute of our frail existence — one day an aeroplane would carry the bomb that would destroy us all in a flash. It could happen at any time.”

To make rock music that mattered in the 1960s, he had to destroy the music of his parents’ generation, which took some gumption since his father made a living in swing bands and was rendered obsolete by youth culture and, more specifically, by rock 'n' roll. Clifford Blandford Townshend is a curious presence in “Who I Am”: He obviously instilled in his son a love of music and entertaining, although he never encouraged Pete. There’s an almost competitive dynamic between them, an almost Oedipal struggle with music standing in for the mother.

Furthermore, Townshend had to destroy certain insecurities instilled in him by a miserable childhood defined by family drama. His parents had a rocky marriage; at one point his mother was openly carrying on an affair with another man, but called off the divorce for Pete’s sake. Worse, when he was 6, Pete was sent to live with his grandmother, a mentally unstable woman who psychologically, emotionally and possibly sexually abused her charge. These passages are harrowing to read, as he acts out by starting fires and retreating into himself. As an adult, he will become incredibly self-conscious and introverted, describing “the polarities of my ego” as “the artistic grandiosity and the desperately low self-regard.”

Townshend proves an unlikely rock hero. During the Who’s early tours, he disdained groupies and drugs, disguising his shyness and the shame of his bisexual curiosity with high-minded ideas about art and rock 'n' roll. Of course, when he does finally partake, he throws himself into these vices wholeheartedly, becoming a raging alcoholic, coke fiend and romantic fabulist. As with the best rock memoirs, “Who I Am” is forthcoming about Townshend’s binges and relapses, his liberties and indulgences, which make him an unreliable performer and husband.

“Who I Am” is, in fact, the story of how Townshend becomes rock’s great curmudgeon, maintaining a strained dynamic with his peers as well as an often contentious relationship with his fans. Many readers, especially those with a long-held interest in the Who, may be frustrated by Townshend’s concerns. He deliberates on minor matters, then glosses over enormous events. Aside from “I Can’t Explain,” many of the Who’s early hits are neglected (“A Legal Matter,” one of Townshend’s wittiest compositions, is completely omitted), yet he goes on at length about the aborted rock opera “Lifehouse.” He spends an inordinate amount of time trying vainly to decipher “A Quick One While He’s Away,” an allegorical reference to the abuse he suffered at the hands of his grandmother, but neglects to plumb the meaning of “The Kids Are Alright,” whose exquisite melancholy and alienation are obviously rooted in his childhood experiences.

Of course, this is the prerogative of any memoirist, to reassess one’s obsessions and to shed new light into dark corners. Often, however, Townshend’s priorities can be frustrating. The death of drummer Keith Moon barely takes up one page in a 500-page book, and while that may be one of the most discussed episodes in Who lore, the point of a book like “Who I Am” is to get a personal perspective on such events. This would have been a good opportunity to reflect on that loss with the benefit of 34 years' distance. Instead, Townshend sounds oddly flippant, and quickly recruits a replacement, reconvenes the band, and launches a new tour. “Throughout my life I haven’t been able to feel any great emotion when someone close to me dies,” he explains. “It’s a terrible defect that makes me appear cold-hearted. I’m sure it’s my own weird way of coping.”

One of the more intriguing narrative arcs in “Who I Am” is Townshend’s evolution from a (self-)destructive rock star into an outgoing philanthropist. In addition to playing countless benefits, he funds shelters for battered women and establishes foundations to address child abuse. “I was becoming an artist of conscience, which was important to me.” It may not be as exciting as smashing a guitar, but these charitable endeavors come across as a viable option for aging rock musicians. As in all pursuits, however, Townshend overreaches. Trying to connect banks to the spread of child pornography on the Internet, he foolishly runs a test case and makes a bad click, which results in a very public police investigation. Ultimately, no charges are brought against him, but the psychological damage is profound, especially for a man who suffered abuse himself as a child.

That incident is one of many that might have caused Townshend to auto-destruct, but “Who I Am” makes clear that his survival is a testament to his creative and spiritual resolve. He emerges, despite the book’s flaws, as a complex and compelling artist, alternately brilliant and pitiable. The Who is another matter altogether. The group disbanded many times, but always in a meeting room and never on a stage. “The Who had gone down, but not in flames,” he writes about one disbanding of many. “There had been no glorious on-stage heart attack, no grandly tragic hotel-room overdose, no suicide; nothing. Nothing I had done on stage had incited Roger to bash my head in; he had never felt the desire to walk off, or to complain to the press about my overly long solos, or any other self-indulgences.”

It’s a curious sentiment given the untimely deaths of Moon and Entwhistle (who actually did O.D. in a hotel room), but none of the splits ever took. The Who continues today, less a true band than a two-man brand sustained by equals parts nostalgia and innovation. Perhaps unwittingly, “Who I Am” gives the impression that the Who needs to come to an end. That’s what it was made for, after all.