The war on 12-year-old girls 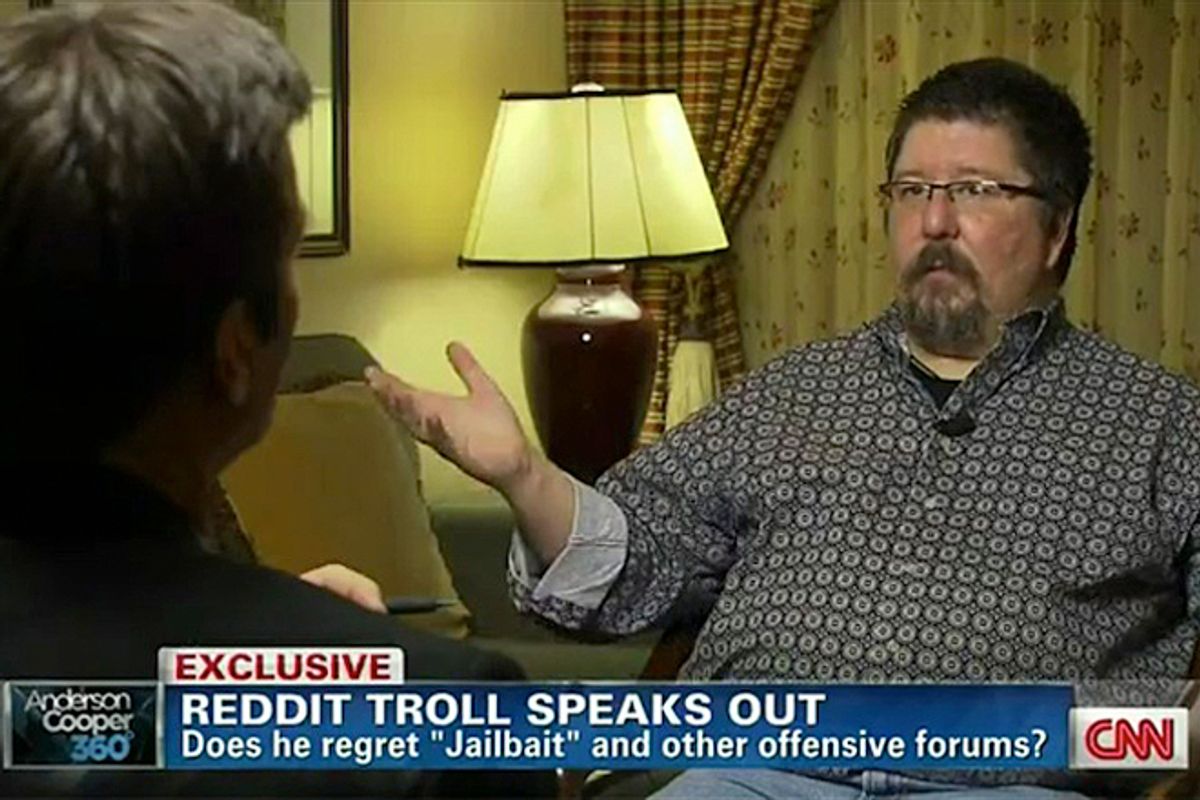 Behold the scariest, most dangerous creature in America: the 12-year-old girl. Better shut her down.

It's been an alarmingly terrible week for girls. There's been the sickening story of the death of Amanda Todd, whose odyssey of bullying and shaming began when she was a curious seventh-grader who responded to a webcam user's request for a "flash" of her young breasts. On the bright side, though, there was also the cheery news that vaccinations won't turn 11- and 12-year-old girls into dirty whores. That's got to be some form of possible advancement for female health, because "promiscuity risk" is still the No. 1 concern parents have about Gardasil, the vaccine against the HPV virus that can lead to cervical cancer. Great to know we live in a country where families are more worried about the imaginary risk of their daughters' sexual behavior than the real one of viruses and cancer.

And then we've had those unavoidable, headline-grabbing creeps. On Thursday, Michael Brutsch, the 49-year-old Texan whom Gawker's Adrien Chen exposed last week as notorious Reddit troll Violentacrez, gave his first television interview on Anderson Cooper's "360." As Violentacrez, Brutsch was behind the (thankfully now defunct) subreddit Jailbait and had until recently been moderating his new pet Reddit project, Creepshots, a gallery of leering, surreptitiously shot photos of women. The "Violentacrez character," as Brutsch refers to himself, was also behind such provocative subreddits as Rapebait, Chokeabitch and Picsofdeadkids, and claimed he had sex with his stepdaughter. In other words, he's one of the grossest examples of our species we've currently got going.

The self-described "creepy uncle of Reddit," who was dismissed from his job after his online alter ego was revealed, seemed embarrassed yet only marginally self-aware in his conversation with Drew Griffin as he humble-bragged, "There are hot-button topics that you can make a comment about and just enrage people … Apparently I have a gift for pushing buttons."

At one point in the conversation, Griffin faced Brutsch and said of his behavior, "I'm a father. Of a daughter. I would be very mad at you." Brutsch's face at that moment was priceless, briefly flickering with the understanding that those drooled over girls in their underwear he posted all over Reddit are somebody's daughters. Then the light went off again.

"All I can say is that I'm sorry. I have made mistakes," he said, before adding, "Reddit encouraged and enabled this sort of behavior, and I shouldn't have been a part of it. Nobody on Reddit really had anything to say about it at all. Since then, I have come to understand that there are situations where things are inappropriate … I am to some degree apologizing for what I did … I was playing to an audience of college kids. And you know, when two years ago, when all of this was at its height, the audience was appreciative and supportive of the sort of gallows humor that I put out there."

Brutsch is a grown-ass man who has made his own choices, choices that creatures with opposable thumbs would generally find repugnant. Yet when he showed off the gold-plated Reddit bobblehead award he received "for making significant contributions to the site," he was offering very real evidence that in addition to being a singular, walking piece of vomit, he's also undeniably a bro in a community of fellow dirtbags. He existed, and thrived, because he had the encouragement to do so.

What is it about young girls that's so incendiary? That could make "Jailbait" for a time the second most popular search on Reddit, that would ever put the words "12-year-old" and "slut" together? This BS – this dehumanizing crap – can't just be chalked up to the inherent budding attractiveness of youth and freshness. This goes way, way beyond that particular can of worms. I think it has a whole lot to do with just how deeply engrained the hatred of women is in our culture.

It's not a coincidence that it's right around the age of 12 that a girl begins to come to an understanding of her potential for power. Not just her sexual power. But her intellectual and physical mettle as well. She's still very much a child – a child in need of support and protection – but early adolescence is the beginning of a girl coming into her own as an independent person. With a brain and a body she's going to control. How terrifying that is for the hateful, misogynistic jerks of the world. (And I'm not letting sabotaging, self-hating females off the hook here for their bullying and divisiveness either; they're a huge part of the problem too.) They pick on girls because it's easier than dealing with adult women; that's how weak they are.

I look at my own 12-year-old daughter and I see so much possibility in her. So much strength and wisdom and beauty. And some days, I feel like apologizing to her for everything on the Internet that doesn't involve tiny pigs. I wish I could write off the likes of Michael Brutsch as one isolated, disturbed individual. And he's exceptional; a king among trolls, to be sure. But he exists because there is a strong and vocal community of little creeps who are simultaneously aroused and hateful and scared to death of everything that a young girl represents. Who look at her and feel so bad about their own pathetic selves they want nothing more than to tear her down and make her feel ever worse about herself. My dear daughter, I am so sorry these morons are out there, and that you and your friends are in their cross hairs. That they don't see you as a person but a threat.

But I hope they're right. I hope you and your friends grow up to be everything that scares the crap out of these idiots. I hope you all stay loud and strong and refuse to be pushed around by dirty weirdos hiding in their basements, anonymously trying put you down, rewarding each other with encouragement and bobbleheads. I hope you change the world. I hope you all can stay brave and autonomous and bullyproof and be their worst nightmare. Because they're been trying to be yours for way too long.