One of the paper's blogs calls his soup kitchen stunt par for the course. It is sorely mistaken 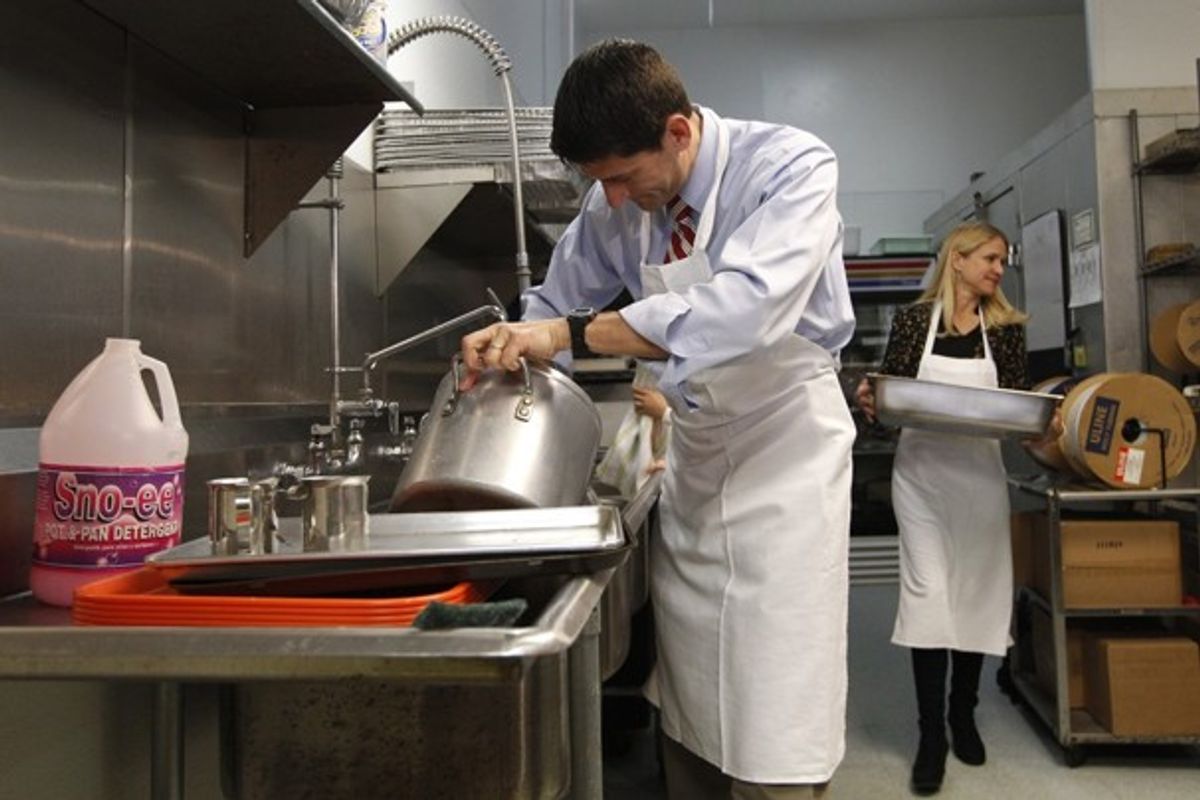 In the Washington Post “Reliable Source” blog yesterday morning, the authors make the point (Political photo ops: From Reagan to Paul Ryan, the game every candidate plays) that Paul Ryan’s photo op at a soup kitchen last weekend was nothing more then par for the course. In their minds, the Ryan campaign manipulating its way into a charity’s kitchen after the meal was over and washing already clean dishes was hardly different from images of Clinton jogging, or Bush clearing brush on his Texas ranch, or Obama shooting hoops, or Reagan sitting on a horse.

Well, I can understand the media wanting to absolve itself of responsibility in enabling the Ryan photo op and distributing the pictures, as we detailed last week, but in this case (pardon the pun), these comparisons don’t wash. (A ca-ching, however, for accompanying the article with a photo-op slideshow as click bait.)

Were you shocked to learn those photos of Paul Ryan washing dishes at a soup kitchen were basically staged? The VP candidate got blowback this week from the charity president, who claimed the campaign “ramrodded” its way into a dining hall that wasn’t even serving at the time. But if it had been, would the photo op have been much less fakey-fake?

Well, for starters, that first line is a straw man since I doubt anything a politician does from a persuasive standpoint (including lying to the American people through his or her teeth for months on end) is going to “shock” the American people. The key term in the paragraph, though, even if the authors put quotes around it, is ramrodding.

That “ramrodding” is what’s in the pudding that can’t be scrubbed away, no matter how much Sno-ee you pour on it … Now, if Ron and Nancy had helped themselves to those horses and then trespassed on private land after talking their way past some lowly groundskeeper, then we’d be talking.

Horses and basketball aside, though, let’s take an even stronger example. When Bush, the war hawk, landed on an aircraft carrier in a fighter plane to show off his (and America’s) bulge, or later, to hang up a banner on another carrier declaring “Mission Accomplished,” those were photo ops, too, ones that carried deadly implications for the future of the country. But you know what? It was clear, even in those instances, that Bush was spinning -- that he was putting on a show.

The thing is -- and here’s where Ryan’s judgement and Ryan’s performance went so wrong -- in a photo op, there is a clear understanding between the politician and the photographer, the photo editor, the publisher and, ultimately, the citizen that the image is theater — and that, in the production of that theater or impressionistic bit of character fiction, basic reality wasn’t tampered with and no animals were harmed.

Why the soup kitchen case is so egregious, on the other hand, is because Ryan fully and willfully expected the audience consuming the imagery to believe that a homeless dinner was going on or, at least, an official cleanup of that dinner was in progress, signifying that Ryan was — in contrast to sitting on a horse or running laps around the White House — actually participating in a public, humanitarian ritual. In contrast to Reagan and the rest, this was not theater, it was Ryan manipulating our trust in the underlying reality of the situation in a not just personal and private, but a “civic deception.”

Ryan not only fabricated the circumstances, but in doing so, he put in jeopardy the integrity, the credibility and the responsibility of not just the people associated with that charity, but (hello, Reliable Source!) every journalist, photojournalist and media organization aware of the deceit but expected to play along. Isn’t that libel?

I’m so sorry it’s Washington’s premier news institution that forces me to have to spell this out in such frank terms, but the Ryan photo op was much less theater than it was fraud.