The 10 most Islamophobic moments in the 2012 elections

From Allen West to Michele Bachmann, these are the most hateful examples of bigotry against Muslims this campaign 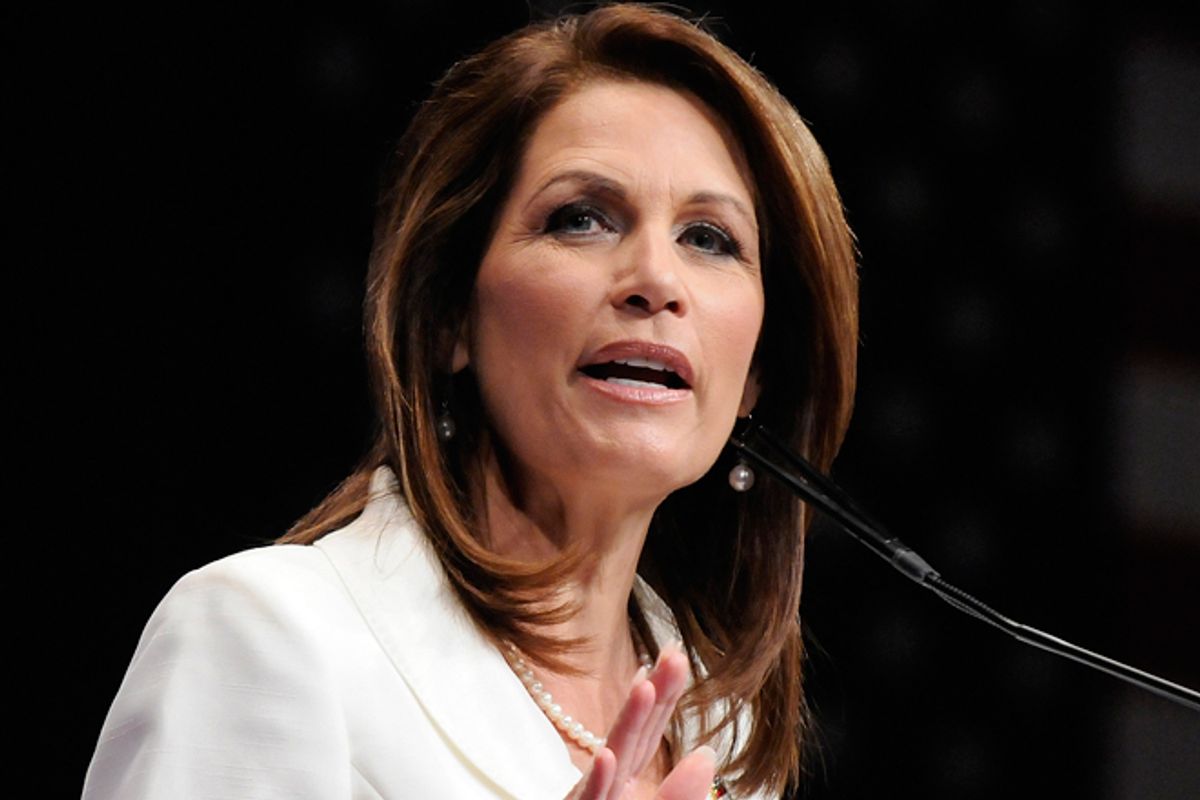 When we're all proven wrong and living in a bacon-less hellscape of Shariah law ruled by the iron fist of Mullah Obama, we can't say we weren't warned. According to the right-wing fringe, racism is dead -- but long live Islamophobia, for there is jihad in every mosque and we must be vigilant.

But Islamophobia -- even from elected officials -- is still dramatically undercovered by the media. So you might easily have missed some of these 10 most disgraceful examples of bigotry, ignorance and hate -- from obscure county parties to the halls of Congress -- during an election cycle with plenty to go around:

10. Allen West is Allen West -- Florida Rep. Allen West is known for making inflammatory statements about pretty much everyone, but he has particularly targeted Muslims. This cycle alone, he’s commemorated 9/11 by screening an anti-Islamic film, said that Democratic Rep. Keith Ellison “really does represent the antithesis of the principles upon which this country was established," and another time theorized that “George Bush got snookered into going into some mosque, taking his shoes off, and then saying that Islam was a religion of peace.”

9. Republicans go after one of their own -- When David Ramadan, a longtime Republican Party activist and protege of Grover Norquist,  ran for a seat in the Virginia House of Delegates in 2011, the Islamophobia network sprang into action. Norquist, of course, is a secret Muslim Brotherhood agent according to these people, so his actual Muslim bud must be worse. Pam Geller called him an “Islamic supremacist,” David Horowitz warned Virginia Republicans not to “lie down in the camel’s bed,” and Frank Gaffney accused him of having ties to Hezbollah. There were nasty ads and exchanges at town halls, but Ramadan won the GOP primary and eventually a seat in the House of Delegates.

8. And again, but this time they call him a "terrorist" -- The Islamophobia trickles down all the way to the local level, we found, in the case of Nezar Hamze, a Republican from Florida who tried to join the Broward County Republican Executive Committee but got turned down by a vote of 158 to 11. He met all the requirements, but people in his own party distributed pamphlets labeling him a “terrorist.” The basis? Hamze is head of the local chapter of CAIR.

7. Obama the closeted Muslim -- Plenty of people have suggested that President Obama is a secret Muslim this cycle, but California Republican congressional candidate Sam Aanestad wins the award for his remarkable forthrightness: "I was asked, do I think [Obama]'s a Muslim, and the answer is yes, that is his background. That is his beginning. Is he a Christian today? There's no way that you or I can tell that. But his background, his upbringing, his tradition, his holiday observances all come from a Muslim background.”

6. Even worse than Allen West -- After Allen West fled his old district after redistricting, the good people of Florida’s 22nd got a new Islamophobe to kick around: Adam Hasner, the former Florida House majority leader. The Republican is a close personal friend of anti-Islam bloggers Pamela Geller and Robert Spencer, has invited notoriously anti-Muslim Dutch Parliamentarian Geert Wilders to speak in Florida, and once skipped the Florida Legislature’s opening prayers because they were being delivered by an imam. When Salon highlighted his Islamophobic record in August, Geller said it was only a matter of time before we were “getting measured for a suicide vest.”

5. A real-life Muslim in Congress! -- Democratic Minnesota Rep. Keith Ellison was the first Muslim elected to Congress, so he’s used to it, but his Republican opponent, Chris Fields, accused him this year in a mailer of being "militantly anti-America." That's nothing compared to how Fields’ GOP primary opponent came right out and called him a "radical Islamist" in the statement announcing her candidacy for his seat. In fact, Ellison’s religion was her primary motivation for running.

4. A real-life Muslim in Congress! Part 2 -- Democratic Rep. Andre Carson of Indiana was the second Muslim elected to Congress and has so far attracted less hate than Ellison, but when he was  praising the innovative ways parochial schools remain relevant, including Muslim schools, it caused a grade-A right-wing freakout, complete with hyperventilating from Glenn Beck, Sean Hannity and Rush Limbaugh about how Carson wanted to force students to learn the Quran. One assumes that if Carson had praised St. Mary's Junior High School instead of a madrassa, no one would have batted an eyelash.

3. Islamophobia-off 2012 -- Rep. Diane Black managed to beat out Lou Ann Zelenik in the Republican primary in Tennessee that basically came down to an Islamophobia-off. The debate mostly centered around the planned mosque in Murfreesboro, which has become a lightning rod for anti-Muslim sentiment in the area and across the country. In fighting the mosque, Black charged that communities need to protect themselves from the “jihadist viewpoint.” But Zelenik, the executive director of the reliably Islamophobic Tennessee Freedom Coalition, thought Black's stance didn't go far enough, firing back: “I will work to stop the Islamization of our society, and do everything possible to prevent Shariah law from circumventing our laws and our Constitution."

2. Joe Walsh (probably) causes a hate crime -- Rep. Joe Walsh, the Tea Party darling poised to lose his seat in November, warned  in August that "a radical strain of Islam in this country ... trying to kill Americans every week.” “It’s here. It’s in Elk Grove. It’s in Addison. It’s in Elgin. It’s here,” he added. Hours later, a man shot at a mosque in the district, narrowly missing a security guard outside as 500 people prayed inside.

1. Michele Bachmann's witch hunt -- Then there's the Tea Party queen herself, Minnesota Republican Rep. Michele Bachmann. Bachmann is facing a tighter-than-expected race against Democratic hotel magnate Jim Graves, and she has possibly even outdone herself this cycle with allegations that Huma Abedin, a senior aide to Hillary Clinton, is tied to Egypt's Muslim Brotherhood and potentially part of a conspiracy to influence U.S. policy through her position. Bachmann also used a speech at the Values Voters conference to fear-monger about President Obama's policy in the Middle East: “The fact is this administration is virtually outlawed understanding who the enemy is and at every turn the enemy the president is persistent on apologizing for who we are as Americans,” she said.