Winter is coming. These gloves won't leave your smartphone in the cold 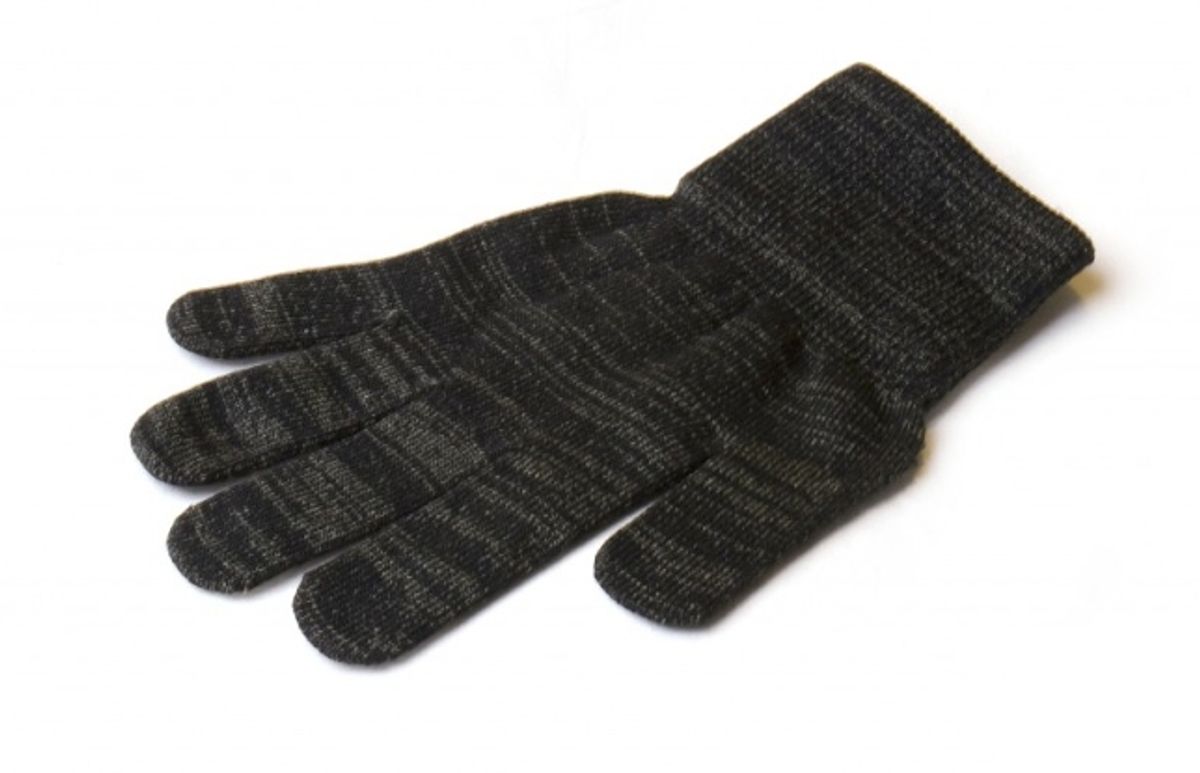 For as little as $16, a pair of  GliderGloves Urban gloves will let you tap and swipe your smartphone in the cold.

Anyone who owns a smartphone knows what a pain in the ass it is to have to tug off your gloves in the dead of winter just to make a phone call or respond to a text message. In order for a capacitative touchscreen—the touchscreen technology used in the majority of touch-capable phones, tablets and computers today—to register that it’s being asked to do something, you have to poke it with something that conducts electricity like a finger or a stylus.

Over the course of 14 hours of research, I tested 12 different pairs of gloves from a number of different manufacturers. Using an iPhone, iPad 2 and a Nexus 7  tablet as my test hardware, I spent time wearing each pair of gloves and attempted to do the following:

In doing so, I discovered a fundamental truth about touch screen gloves. For one reason or another, they all kind of suck:

Taking all of this into consideration, as well as the aesthetics, built quality, cost and other features of all of the gloves I tested, I chose GliderGloves' Urban Style gloves as the best set of touchscreen-compatible pair of mitts that I was able to get my hands into.

Available in a number of different colors, Urban Style gloves are double layered. The interior acrylic layer is soft to the touch and offers a reasonable amount of warmth. The outer shell of the gloves is made from a mixed fabric composed of conductive materials, spandex, nylon, acrylics and lycra that covers the glove from cuff to fingertip. This makes it possible to interact with a touch screen device with any part of your hand.

Slipping them on, I found that the fit reminded me of a pair of law enforcement duty gloves: tight in the palm, snug along the sides of the hand, and just a little bit looser along the back of the hand, so that you can flex and rotate at the wrist without feeling bound up. They weren’t so tight that they felt uncomfortable, but you won’t forget that you’re wearing them. While you can see where the gloves are stitched along the fingers and the side of the palms, the needlework’s delicate enough that it doesn’t pucker or raise the fabric up at the seams. The glove is long enough to cover your wrists, making it easy to tuck the cuff into your coat sleeves. The cuffs of the gloves are finished in a faux leather to keep them from fraying or rolling and feature an elastic band to hold them in place. Shame about the elastic: It makes the otherwise slick-looking mitts look all kinds of clunky. Fortunately, since you’ll likely be wearing a coat with these things, no one will notice.

Nylon, acrylic and lycra are all slick materials, and therefore, not particularly well suited to holding on to expensive, smooth heavy objects like a tablet or smartphone. To offset this, GliderGloves has equipped its Urban Style paws with a field of silicon dots arrayed across the palms and the bottom of the fingers of the gloves. I found that the dots provided enough resistance against the slick surfaces of my iPhone 4S and iPad 2 to keep them in place while I typed or tapped away at length. As an added bonus, the product care instructions tag sewn into the gloves can be used as a cloth to clean your device’s screen. It's not a huge piece of cloth, but better than nothing and a thoughtful touch that I appreciated.

How do they perform? Well, nothing beats your bare hands for manipulating a tablet or smartphone’s touchscreen interface, but they did offer the best overall user experience out of any of the gloves I tested. I had no trouble typing, tinkering with my phone’s settings or playing games. The Same thing goes for both the iPad 2 and my Nexus 7.

You wear winter gloves because you’re cold. Did the GliderGloves keep me warm? Yep. Walking around Ontario’s Grey Highlands on a windy, six degree Celsius (42.8 F) day, I didn’t feel the cold. Would they preform the same at −10 Celsius and below? Nope. A GliderGlove user reported in the MobileSyrup forums that “they're warm enough up to -15 C (5 F) or so. Around that temperature I usually had to put my hands in my coat pockets to keep them warm.

In Montréal it was -36 C (32.8 F) with the windchill. My hands were freezing with these gloves on even though my hands were in my coat pockets. Definitely should've worn regular winter gloves.  So yeah, I’d say that they’ll be fine to wear when you shovel snow out of your driveway or if you have to scrape the ice off your windshield in late November, but I wouldn’t want to take them downhill skiing in January.

They're also not waterproof. Maybe a little water resistant, but in a downpour or after an hour's worth of tobogganing, your hands will be wet wearing these things.

Normally, I like to back my findings up with a ton of editorial reviews of the product I’m talking about, but it wasn’t possible to do so this time around. The only credible review I was able to dig up came from Stacy Bruce of TalkAndroid.com. Bruce’s review of the gloves was overwhelmingly positive and cited the warmth that they offered, as well as the amount of functionality he was able to still get out of his smartphone while wearing them. The Blackberry-centirc site BerryReviews gave GliderGloves a thumbs up as well, but because there’s no name tied to the review I don’t feel comfortable in using it as an endorsement for the gloves. I also noticed that they haven’t sold well so far on Amazon. This lack of sales has translated into a lack of user reviews either for or against the gloves.

What I can give you is my opinion of how they stacked up against their competition in my testing.

Underarmor’s Coldgear Techgloves have the same peace-of-mind silicon grip palms as the GliderGloves do, and offer the brand’s Moisture Transport System to help wick sweat away from the hands of active users. But they cost $35, and only offer capacitative touch functionality in the fingertips. You could pick up a pair of Hipstreet Touchscreen gloves from Best Buy or Futureshop, for $9, but they offer next to no protection from the cold and no slip protection is built into the fingers or palms.

The North Face has is known for making exceptional outerwear, but despite the build quality and grip of their $45 Etip Gloves, they only come with a single capacitative panel sewn into the index finger and thumb of each glove. Capacitative panels are lame, and having only two points of useable contact per hand? Lame. Isotoner’s SmarTouch 2.0 gloves can be had for as low as $25, but the capacitative thread sewn into the fingertips of the gloves is sunk into the glove’s shell, so you have to mash your digits into your screen in order for it to register a touch. Etre’s Five Point gloves and Touchy gloves were the most comfortable gloves I tested, but their shells started to show signs of wear after a small amount of use after brushing up against the Velcro of the storm panel that covers my coat’s zipper. Plus, they cost $65 and $55 respectively.

For $25, you could score yourself a pair of Agloves Sport. They look much the same as the Urban style gloves do, and they’re entirely capacitative. But they cost more and they lacked the GliderGloves' reinforced cuff. I also wasn’t thrilled with their build quality: they stretched just a little too much for me to feel confident in their long-term durability. I bought a pair of 5. 11 Tactical’s Screen Ops Patrol Gloves through Amazon. They were tough and looked great, but the touch panels sewn into the finger tips and thumbs of the gloves felt like they were included as an afterthought, and often failed to work with my iPhone, especially when I typed with my thumbs.

The only real competition that the GliderGloves had were Outdoor Research’s Sensor Gloves. They won an Editor’s Choice Award from Backpacker.com last year, and use a patented capacitative leather technology instead of the capacitative fiber or touch panels I saw in the rest of the products I tested. They look bad-ass, felt almost as comfortable as the Etre gloves did, and were easily the best built gloves I tested.  They would have won, but I found that the stitching in the ends of the fingers and thumbs often left me touching parts of the screen that I hadn’t intended—not by a lot, but just enough that typing became frustrating and gaming wasn’t as much fun as it should be. This, along with the fact that they cost between $50 and $80 depending on their size, put them in second place.

So yeah, GliderGloves Urban gloves are the best touchscreen compatible gloves I could find. But they’re not perfect.

Like I said earlier, the exposed elastic strap is kind of tacky. I suspect that given time, it’ll lose a lot of its strength after repeatedly pulling the gloves on and taking them off. While the fabric they’re made out of proved to be more durable than that of any of the other non-technical gloves I tested, it’s still susceptible to pulls and wear. I was able to yank threads out of the weave from the back of one of the gloves with very little effort. And if you get caught out in the rain or some wet snow? Your hands are going to get wet and stay wet until you can dry the gloves off. But that doesn’t mean you shouldn’t buy them.

Seriously, for $16, they’re a great buy that’ll keep your hands warm in all but the coldest weather. My mother’s finally getting her first smartphone this year, and I’ve ordered a pair for her. If I’d give a pair of these things to my mom, then it’s a safe bet that I’d recommend them to you, too.