Sunday show round up 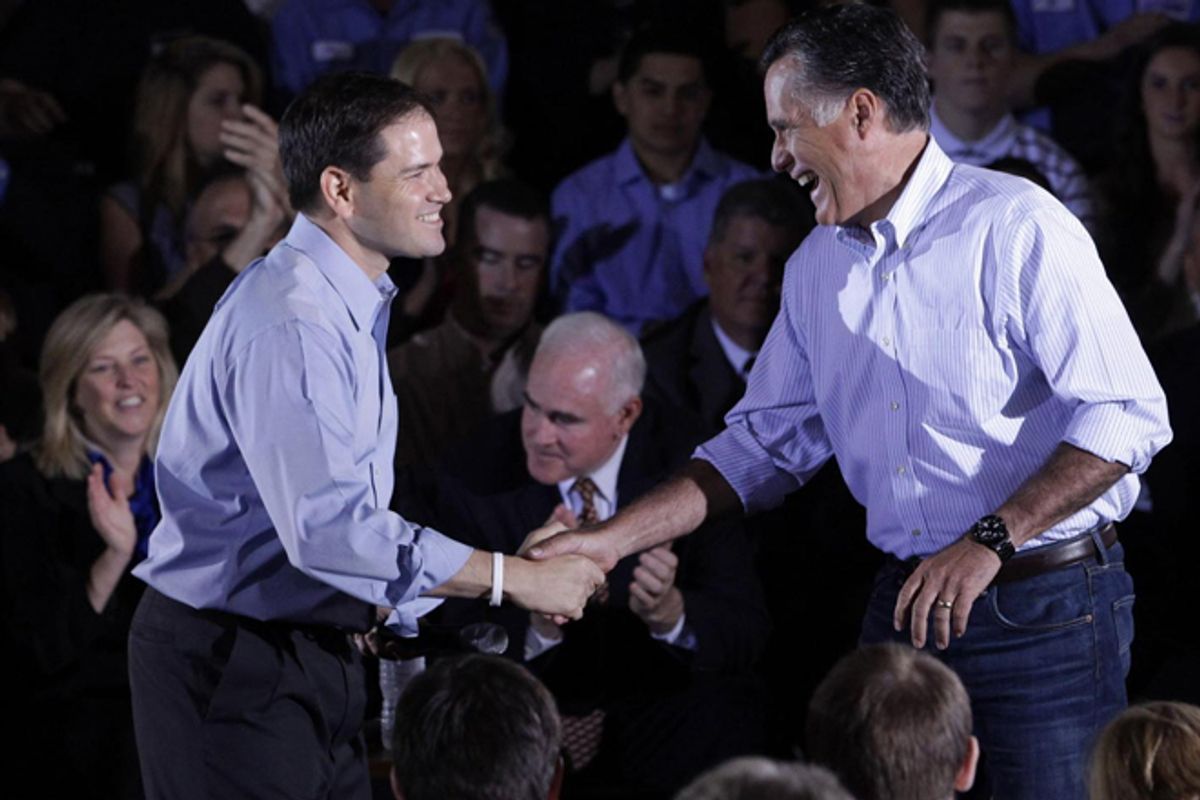 With just one day to go before the final presidential debate, which will focus on foreign policy, the Sunday shows were awash with Obama and Romney surrogates trotting out party lines on foreign policy topics du jour -- predominantly the Libya embassy attacks and Iran.

Fox News Sunday saw Sen. Lindsey Graham (R-S.C.) tow a hawkish line on Iran, calling the crippling program of sanctions currently in place a "miserable failure." "Time for talking is over he said," echoing Bibi Netanyahu's call for the U.S. to draw "red lines" over Iran's nuclear ambitions. "We should be demanding transparency and access to their nuclear program," Graham said.

Sen. Dick Durbin (D-Ill.) defended the sanctions program against Graham's attacks, "There's unrest in the streets of Tehran and the leaders in Iran are feeling it," he said.

David Axelrod echoed Durbin's point during his appearance on NBC's "Meet the Press," "They're [Tehran is] feeling the heat. And that's what the sanctions were meant to do. So if they're sensible, they're looking at that and saying it's time to set aside our nuclear ambitions and save our economy."

On NBC's "Meet the Press," host David Gregory, after a brief discussion with Sen. Marco Rubio (R-Fla.) over Iran, pointed out that there's "not a tremendous amount of difference" between Romney and Obama's proposed Iran strategies.

Watch the video of Graham's Iran comments on Fox News Sunday below, via Crooks & Liars:

The fatal terrorist attacks on the Benghazi consulate occupied the talking heads' attention again this Sunday, with further partisan accusations flying of politicians "politicizing" the tragedy (watch our "Must-see morning clip" for SNL's take, and probably the best assessment so far, on the "politicizing charge.")

On CBS's "Face the Nation," Marco Rubio chimed in to lambast, or as he put it "wonder about" the White House for allegedly resisting the narrative that terrorists orchestrated the attacks because it would upset Obama's campaign narrative. "Is that why for two weeks they told us that the Libyan incident in Benghazi was a popular uprising and not a terrorist attack because it ran counter to their campaign narrative? I hope that that's not true but that's what you start to wonder about," said Rubio.

Watch Rubio on "Face the Nation" below:

Romnesia and other jokes

Republican surrogate Rubio also used his Sunday TV appearances to skewer the president for his mocking "Romnesia" remark earlier this week. During a speech, Obama quipped that when someone consistently forgets their previous positions they might have a case of "Romnesia."

On ABC's "This Week", Rubio, who was making the Sunday show rounds, shot back, "That fires up his base, people who are going to vote for him anyway. But for the rest of Americans who are trying to make up their mind who to vote for, what they're wondering is, 'Well, that’s very cute Mr. President, but what are you going to do for the future?'"

Rubio also criticized last week's most popular joke at Romney expense -- memes playing on the presidential candidate's "binders full of women" comment. "In the debate, this is silly outrage. It's not even real outrage. He was discussing a process that they went through to identify qualified women for important positions in his administration," said Rubio Sunday.

To be sure, it was not only Republicans towing party lines who decried the instant meme-ification of Romney's "binders" flub. In a thoughtful comment piece for Slate, feminist writer Amanda Hess noted, "it was disappointing to see an important conversation about hiring and promoting women in the workforce tabled in favor of nonsensically Photoshopping Carly Rae Jepson into an empty three-ring."

In the same piece, Hess noted that Romney's positions on "health care, contraception and the Lilly Ledbetter Fair Pay Act will do nothing to help women in jobs across America." And in what Joan Walsh chose as her "Sunday Best" from today's shows, the Ledbetter Act came up when Rubio said he opposed the fair pay legislation, but not the principle of fair pay for women.

He said, "Everyone agrees with that principle. But just because they call a piece of legislation an equal pay bill doesn’t make it so. In fact, much of this legislation is, in many respects, nothing but an effort to help trial lawyers collect their fees and file lawsuits."