A man walks into a polling station. The rolls list him as female. Can he vote? 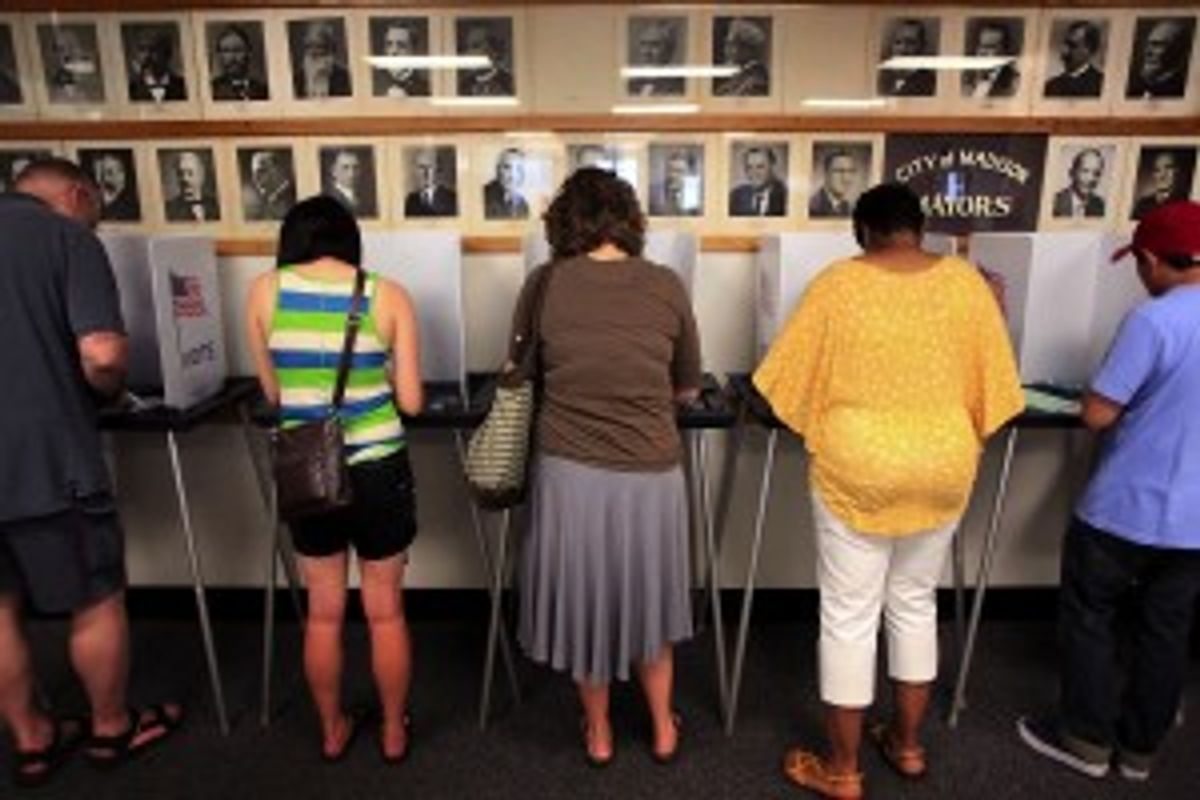 Here’s the thing I loved about talking with Mara Keisling this week: her flat-out declaration that transpeople are winning their civil rights and cultural acceptance battles. I’m crazily Tiggerish on lesbian and gay issues: we’ve come so far so unbelievably fast, over my lifetime, that some days I bounce with glee. But given that the trans part of the LGBT coalition got started about 15 years later and has had very different challenges, I was still an Eeyore about their efforts. So it made my day to hear Keisling, the National Center for Transgender Equality executive director, declare a coming victory. “Science is on our side, first of all,” she explained. “Common sense is on our side. Decency is on our side. When you get that combination, you win every time.”

But of course, winning is not the same as has won—which is why we were discussing the right to vote, and whether transpeople will be able to exercise it this year. Until NCTE launched its “Voting While Trans” initiative, it had never occurred to me that there’s no need to list voters as either male or female. The 19th amendment is nearly 100 years old; I’m pretty sure that I have a right to vote whether “E.J. Graff” is male or female. At the polls, the only info that matters is whether I’ve registered to vote and whether I live at the qualifying address. Why identify my sex? Would I get a different ballot?

But ID, Keisling was explaining to me, can be one of the central hardships for transpeople, whose presentation and legal identification may not match. “It’s absurd,” Keisling told me. “We still put gender markers on things that don’t need to have them. For instance, driver’s licenses. The nice policeman doesn’t pull you over and say, So you’re a man, you can go 82, but if you’re a woman you could only go 72.”  When I said that, presumably, my driver’s license has my sex so the cop knows it’s really me, Keisling pointed out that most identifying data has disappeared from driver’s licenses since states started putting pictures on those little pieces of paper. So I went and checked. Sure enough, my Massachusetts driver’s license no longer has my height or weight--people lie about both, and what does it matter, really? Nor does it have my race or ethnicity, since that’s insultingly irrelevant, and often complicated. So why does it need to list my sex?

You thought you hated going to the DMV. Imagine doing it if your gender marker and your appearance don't match--and you're not going to be able to file for new documents any time soon, whether because of laws or finances or some other reason. As NCTE reports on its website:

… only one-fifth (21%) of transgender people who have transitioned in the National Transgender Discrimination Survey have been able to update all of their IDs and records with their new gender and one-third (33%) had updated none of their IDs or records. At the time of the survey, only 59% had been able to update their gender on their driver’s license or state ID; 49% had updated their Social Security Record; 26% their passport; and just 24% their birth certificate. The survey results also confirmed what most trans people already knew—that gender incongruent identification exposes people to a range of negative outcomes, from denial of employment, housing, and public benefits to harassment and physical violence.

The problem of ID mismatch—official identification as one gender, while a gatekeeper of some kind perceives another—has some very profound effects, Keisling said. In a survey of 6,500 transpeople, NCTE found that nearly a third said that they avoid ordinary preventive healthcare out of fear of discrimination—and a startling percentage stayed away even in emergencies, because of the potential for public humiliation when a receptionist, nurse, or aide tried to match up their appearance with their medical or insurance records. Keisling talked to me about her efforts to get the M/F box removed from the Medicare card, “because it’s a real problem for transpeople. You have to show that card when you get pharmaceuticals, check into hospitals, and so on. I’m all for telling your doctor, but if you look like a man and you have an “F” on your Medicare card, it can cause difficulties with the receptionist who won’t check you in.”

For many people, voting has a far less immediate payout than healthcare, so Keisling assumes that many don’t even try. And this year, with the new wave of voter ID laws, problems with that atavistic M/F box may disenfranchise up to 25,000 transpeople, according to a recent study by UCLA’s Williams Institute. Lila Shapiro at Huffington Post reports:

The root of the concern over transgender voters this fall is that it's very difficult for transgender people to have correct ID, explained Mara Keisling, executive director of the National Center for Transgender Equality. According to the Williams Institute report, in the states that were either considering strict voter ID laws, or already have them in place, 40 percent of transgender people do not have an updated drivers license, and 29 percent had no identification or documents at all that list their correct gender….

Some states have more difficult barriers than others, not only when it comes to voting, but simply in acquiring a new ID after transitioning. In Tennessee, Georgia, Kansas and Indiana, photo IDs are required at the polls, and these states also require sex reassignment surgery in order for transgender people to get identifications with their correct gender and name.

I heard a more personal story about this from Charles Meins of Chelmsford, Massachusetts, a postcard-pretty New England town outside the relatively gritty city of Lowell. Charles said that from the time he was small, his parents let him live as a boy, despite his biologically female body. Last year, at age 21, Charles made that identity official, changing his name to match. His parents would have named him after his father, Charles Meins II, had he been born with male genitalia—so Charles took that name as an adult. Over spring break, Charles and his mother went to the local school to vote in a special town election—only to find that his old name was still on the rolls. A poll worker was confused by the mismatch between his appearance and the female name on the rolls—and insisted that Charles must be trying to impersonate his father, who lived at the same address and had already voted that morning. Young Charles said it was embarrassing and a little comic to repeatedly explain that the name printed on the rolls had been his name, but now his name was Charles. Once the poll worker grasped the concept, he loudly and repeatedly started calling Charles MISS. But he got his ballot.

Ah, but his moment of misery wasn’t yet over. As he handed his completed ballot to the poll worker on the receiving end, he was called “sir.” The first poll worker “shouted across the room, MISS, that’s a MISS! It was uncomfortable in a very jarring sort of way.”

Relating this story, Charles was fairly matter of fact, telling me that compared to some other uncomfortable experiences, this one was fairly minor. He has since gone to town hall and filled out the paperwork necessary to change his name on the voter rolls, which went smoothly. NCTE’s goal at Voting While Trans is to get transpeople and poll workers prepared in advance. Keisling said, “None of us think that these state legislators were sitting around thinking, ‘How do we keep trans people from voting?’ I do believe they were thinking: how do we keep low income people, students, immigrants, older people, and people of color from voting. But transpeople are collateral damage. We recommend better training for poll workers, which is a really hard thing to do and very decentralized. We recommend removing gender markers from voter records and from voter ID cards, and from other kinds of IDs.” Keisling told me that more than half the states have modernized—her words—the rules for updating identification. Older laws say that you can change your gender marker if you’ve had sex change surgery, which is no longer the standard of care; today, “transitioning” can encompass a wide range of things. The newer laws, Keisling said, say “that if you’ve had appropriate care according to you and your physician, you can update drivers license.” The key phrase: appropriate care, defined by you and your doctor, no one else. For some people that might include surgical interventions; for others, it might include hormones; for others, there may be contraindications (multiple sclerosis, say) for medical interventions, and living day to day as male or female may be the most appropriate care. NCTE’s website again:

...About half of states no longer impose such burdensome requirements for driver’s licenses and state ID and growing numbers are streamlining procedures. In 2010, the U.S. State Department eliminated the surgical requirement for updating passports. In 2011, state-level efforts won improvements in birth certificate laws in both California and Vermont, and NCTE worked with the American Association of Motor Vehicles Agencies to educate state agencies about current best practices.

They’re winning, but there’s miles to go before they’ve won.  Meanwhile, can we at least be sure that transpeople—and all the rest of us—can vote?

Read more of The American Prospect at http://www.prospect.org.