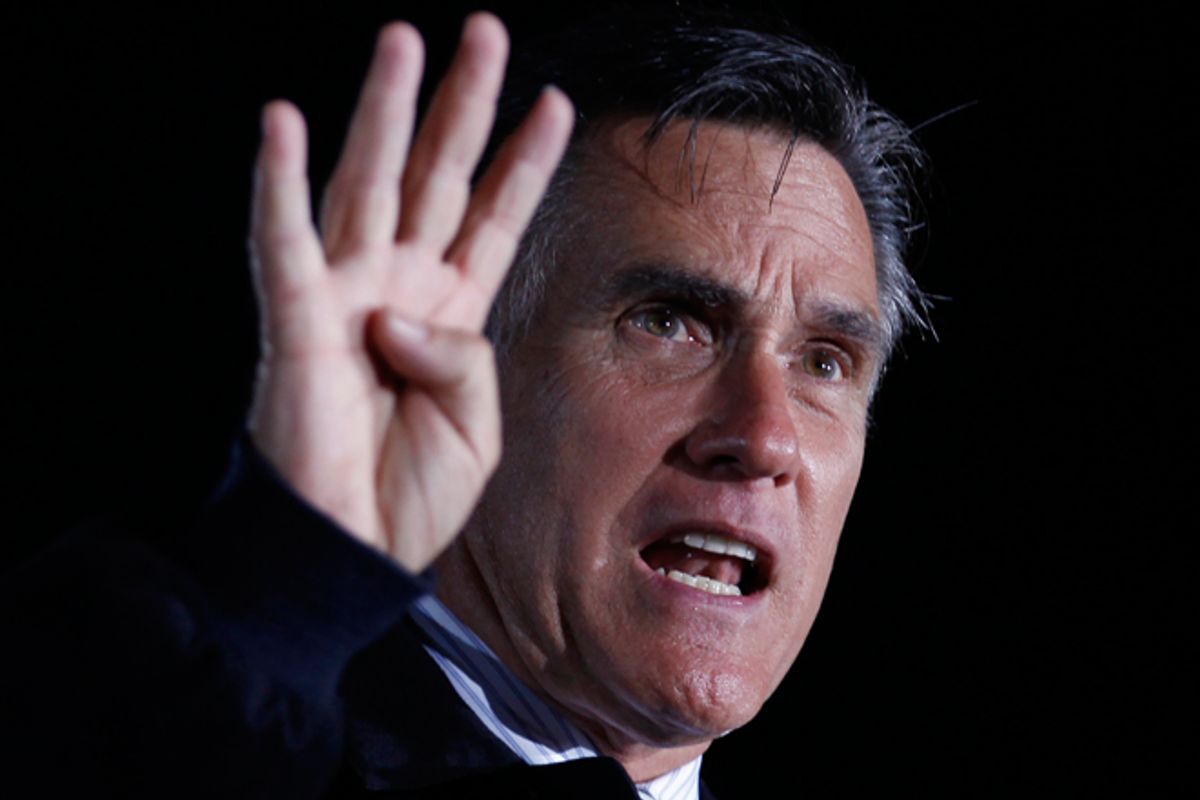 So the debate mainly offers Obama a last chance to make a gaffe or slip-up, while giving Romney a moment to look wise and presidential. A mind-blowing Romney screw-up would certainly help the president, but the man from Bain Capital will probably play things cautiously Monday night, since his major achievement in the uniquely important first debate turns out to have been seeming reasonable.

A different sort of rival could hit Obama from the left on foreign policy, with multiple targets: Obama's aggressive use of predator drones; his claiming the constitutional right to assassinate American citizens without due process; his so-called kill list, and why we aren't moving more quickly to exit Afghanistan. But Romney's signed up the worst of George W. Bush's war-mongering and incompetent neocon team, from Iraq reconstruction blunderer Dan Senor to the ridiculously hawkish and intemperate John Bolton. (If I were Bob Schieffer, the first question I'd ask Romney is whether he can promise the American people that Bolton will play no role in his administration.) He's unlikely to take that opportunity to raise important questions about foreign policy and national security from Obama's left flank.

Given the improbability of a Romney challenge from the left, it's interesting that Obama is out today with a new ad, "Rebuilding," that emphasizes the president's moves to end the war in Iraq and withdraw from Afghanistan. The campaign seems to believe war-weary Americans will appreciate the president's moves toward peace and recoil at Romney's bellicosity. Against a backdrop of Obama meeting with troops, the narrator intones: “A decade of war … That cost us dearly. And now, for the president, a clear choice. President Obama ended the Iraq war. Mitt Romney would have left 30,000 troops there and called bringing them home ‘tragic.’ Obama’s brought 30,000 soldiers back from Afghanistan and has a responsible plan to end the war. Romney calls it Obama’s ‘biggest mistake,’ ” the ad continues. “It’s time to stop fighting over there … and start rebuilding here.”

Having played the "Ask Osama bin Laden" card to fight off charges that he's an appeaser, the president can now afford to present himself as the guy tough enough to make peace. It will be interesting to see how Romney responds.

Obama's challenge is serious tonight. It's easy to for David Axelrod to mock Romney's "Dukes of Hazzard" foreign tour last summer, when he insulted the British over the Olympics, revealed a secret MI5 intelligence meeting and derided Palestinian culture. But the president can't play Romney's recklessness for laughs. Still, he's got to be able to sketch for the voters the enormous risk presented by a Romney presidency, which might escalate rather than withdraw from Afghanistan, take military action against Iran and start a trade war with China. Or not: The tricky thing is that Romney can lie his way through this debate just like he did the first, since he's taken both sides of virtually every foreign policy issue.

Romney gets maudlin over Obama's failure to support Iranian dissidents during the so-called Green Revolution after the 2010 election there, but never says what he would have done instead. His surrogate Sen. Lindsey Graham blasted reports that the administration had agreed "in principle" to hold direct talks with Iran after the election, braying, "the time for talking is over." Romney is likely to use the New York Times article the same way, to depict Obama as an appeaser. Obama, or Schieffer, has to nail him down on his precise Iran policy.

Likewise, Romney called Obama's decision to withdraw from Afghanistan "tragic" – but hasn't said whether he'd keep troops there and for how long.  In the vice-presidential debate, a confused Paul Ryan criticized the admininstration's setting a 2014 withdrawal date – but then said the Romney-Ryan ticket supported the deadline. Romney can't be allowed to wiggle out of explaining his plans for Afghanistan in this crucial foreign policy debate.

Obama also has to be stronger on the facts about Libya. His finest moment in his excellent Hofstra debate came when he pushed back on Romney's fact-challenged attacks on his handling of the Benghazi situation with controlled anger: “The suggestion that anybody on my team, whether the secretary of state or the U.N. ambassador, that anybody on my team, would play politics or mislead when we’ve lost four of our own, Governor, is offensive. That’s not what we do. That’s not what I do as president, that’s not what I do as commander in chief.” (Parenthetically: Some Obama critics saw a haughty, imperial tone in Obama's remarks, but I think context matters: Had he pushed back that way on a genuine foreign policy challenge from, say, George McGovern, I'd see it as an arrogant dodge of valid criticism. Responding to Romney's brazen Benghazi politicking, I thought it was a justifiable display of genuine disgust.)

But Obama needs a clearer message when replying to questions about Libya tonight. Luckily, the GOP story has completely come undone in the last few days. Romney and his surrogates have spent two weeks insisting the Benghazi attack was sponsored by al-Qaida and was unrelated to the anti-Islam film sparking protest elsewhere in the Middle East, in order to charge that Obama's claim to have decimated al-Qaida is false, and that the administration covered up the evidence. But reporting by the New York Times and others has revealed that witnesses said the Benghazi attackers in fact talked about the video, and the CIA itself provided the talking points used by U.N. Ambassador Susan Rice and others who blamed the video. While some Libyans associated with the protest may be sympathetic to al-Qaida, there is still no evidence that al-Qaida planned the attack, or has a stronghold there.

More challenging for Obama is trying to explain our goals in Libya and the likelihood that we'll achieve them. Luckily for him, Romney's in no position to push him on any of that. Just as he's been on abortion, when it comes to Libya, he's Multiple Choice Mitt. First he said we should have intervened sooner, then he questioned intervening at all, then he said the world was a "better place" without Gadhafi.

The danger for Obama is that his foreign policy challenges are real, and while he has plenty of success to point to, there remain legitimate questions about his decisions as well as looming crises. He's got to make the case to the audience that while they may have reservations about his choices, whether from the left or the right, Mitt Romney hasn't shown the knowledge, experience or character to be trusted as commander in chief.