The daughter of GOP operative Alex Castellanos has opinions about politics, and one network deems this newsworthy 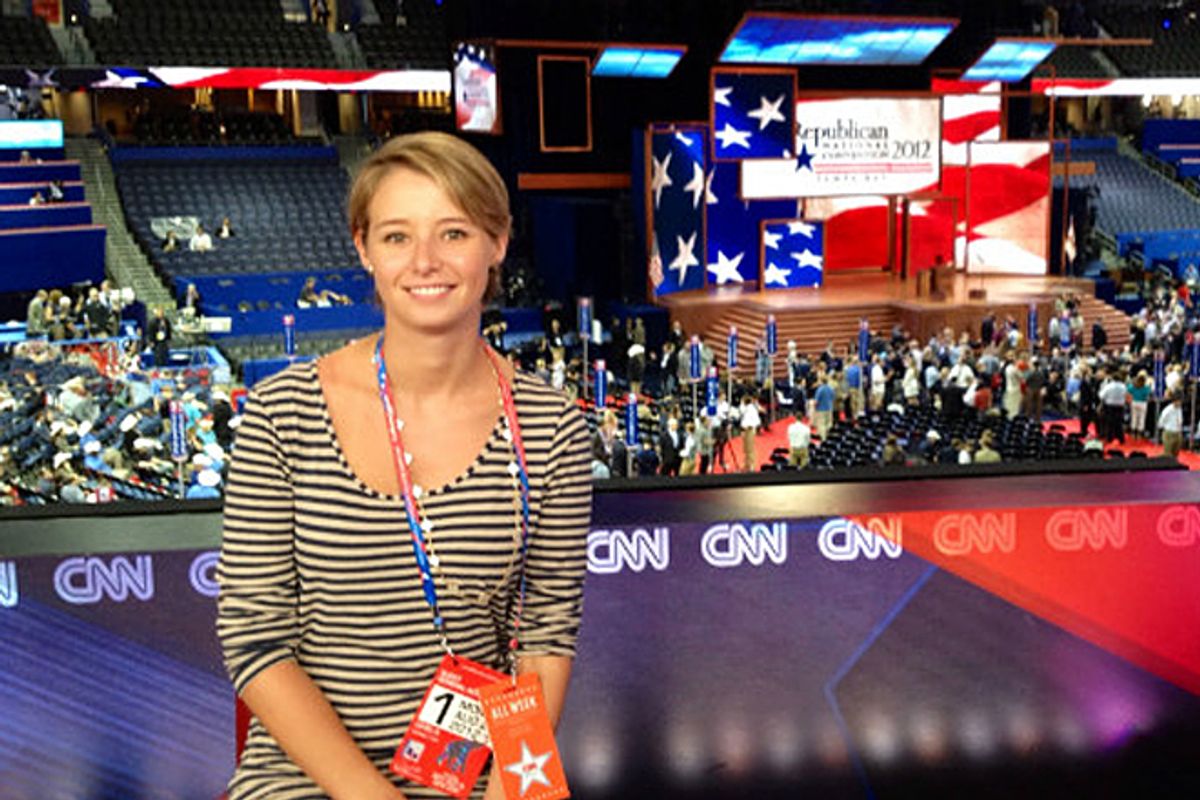 Oh, good, CNN has asked a "young" to explain what "the youngs" think about the election. And, what luck, it turns out that the person with the most interesting take on young people and the election is the offspring of a CNN personality! Please say hello to Cat del Valle Castellanos, daughter of Republican operative and CNN political analyst Alex "White Hands" Castellanos. Her essay is titled "Young, female and undecided."

You will never guess how Castellanos the younger describes her politics.

No way! Just like Meghan McCain! And probably Luke Russert!

As a fiscally conservative and socially liberal young person, Castellanos would like you to know that she is "cool" with gay people and "down with" protecting access to reproductive healthcare for women, but on the other hand, "the national debt."

Obama, my socially liberal side supports you, but what about the national debt? Hope and change were great slogans, but they are not plans. Fool me once, shame on you. Fool me twice ... Am I voting for you when I should know better?

Romney, show me you are human. Inform me with reason but connect to me with emotion. Use that connection to get your point across. I know your hair looks like it came off a Lego man, but there has to be more there than plastic.

In fact, I'm the most valuable American Romney could have: 100% undecided.

I dunno, Mitt Romney will definitely receive the votes of a bunch of "socially liberal, fiscally conservative" self-satisfied idiots, but I'm not sure he considers them more "valuable" than straight-up conservative white men in North Carolina, Virginia, Florida and Ohio. (Also: You seem to live in D.C., Cat, so actually no one cares about winning your vote.)

Young people are not actually "undecided voters." Unless you mean "undecided" over whether to vote. Under-30s are mostly non-voters and liberals. ("About 51 percent of eligible voters under age 30 went to the polls in 2008, considered a strong showing for that group. Most of them — 66 percent, according to exit polls — voted for Barack Obama.")

Are there a significant number of "young, female and undecided" voters out there, though? Are they why Mitt Romney picked that hunk Paul Ryan? If there aren't millions of "fiscally conservative, socially liberal" swing-voting young women still carefully making up their minds between Romney and Obama, this whole stupid essay is just a pointless self-indulgence by the completely unrepresentative child of a horrible person, right? According to Gallup, there is no age group for which the gender gap between Romney and Obama is more pronounced than women 18-29, who support Obama 63 percent to 30 percent for Romney. So Castellanos is, I guess, in "the 7 percent." (Most of whom will probably just not vote.)

Another great editorial decision, CNN! Maybe meet some young people not related to the rich old people you already see every day, next time.