The religious blockbuster "Left Behind" gets a hammy reboot. Who better to star than Ghost Rider himself? 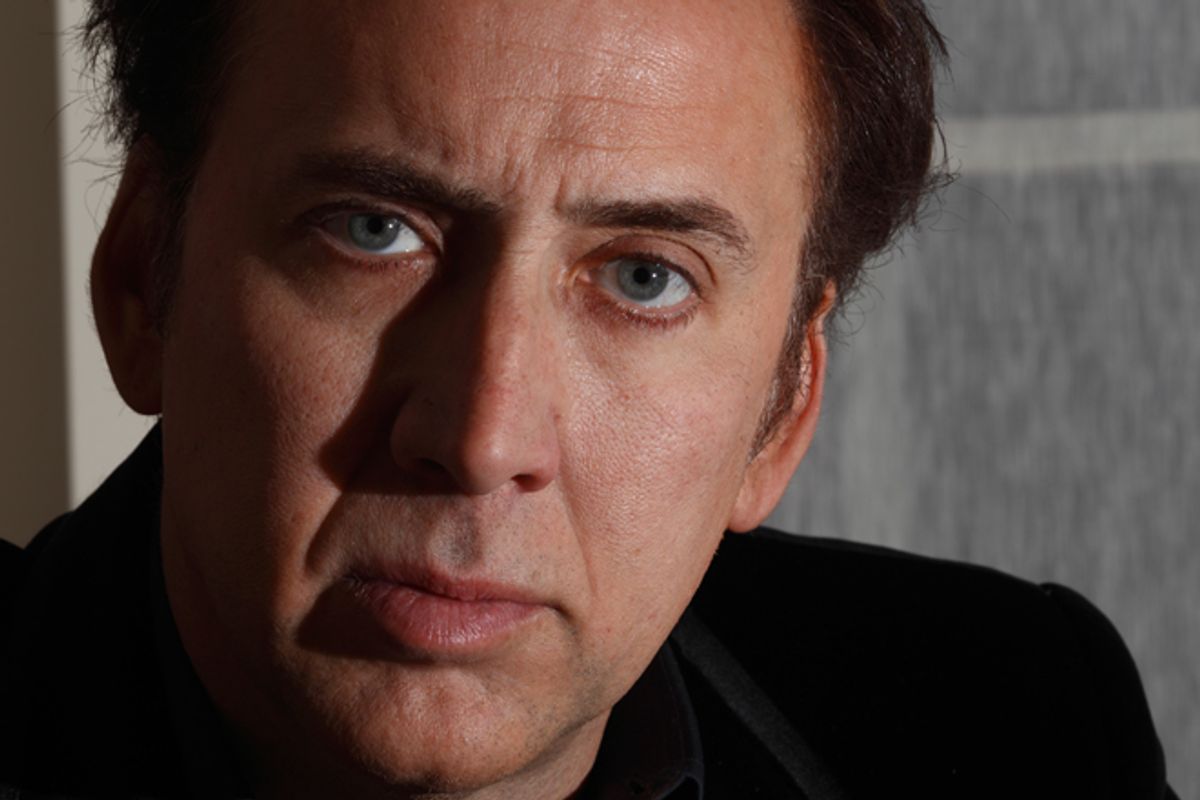 It's all been leading to this. And I don't just mean the long-ago dreams of Georges Méliès to transform fantasy into cinematic vision. I speak, of course, of everything the authors of the Book of Revelation were talking about. World, Nicolas Cage is set to do a remake of "Left Behind." What is there to say beyond, "Should we put up our umbrellas now, because it's about to start raining blood?"

You may recall the original "Left Behind." It's the "Star Wars" of rapture-action movies, the 2000 blockbuster that spawned two sequels and is the single biggest reason that Kirk Cameron still gets booked on talk shows to explain why Darwin was wrong. Based on Tim LaHaye's apocalyptic best-seller, "Left Behind" tells the tale of Buck Williams, one of the unfortunate denizens of the human race who don't get to skip out on a buttload of tribulations the Bible warned about, and is instead saddled with battling the Antichrist.

There are ancient prophecies. Lots of stuff blowing up. Ominous warnings about "seven years of peace." And dialogue like, "But I am turning over my formula to a consortium of U.N. delegates!" In other words, what took Hollywood 12 years to see that this crap has Nic Cage's name written all over it? Fortunately, that's about to change. Variety reports the actor is now in negotiations for "a mainstream reboot" trilogy from the "faith-oriented" Cloud Ten Pictures. So it'll be mainstream. But faith-based. That should be old hat to Cage, who knows all about AAAAAGLLLLLUUUUUGGGHing his way through films with religious themes. Three words: Not. The. Bees.

Cage, for those of you too young to remember "Raising Arizona" and "Moonstruck," used to be an interesting actor. A weirdo, to be sure, the kind of guy who played characters who eat bugs and answer to the name "Sailor," but definitely fun. Then he won an Oscar the way that everybody ever wins an Oscar – for chewing a lot of scenery and dying. And ever since, he's mostly devoted his time to expensive spectacles typed by monkeys – and their lucrative sequels. So it stands to reason that somewhere in the midst of shooting "National Treasure 3" and "Kick-Ass 2" and "The Expendables 3" (I'm not making this up) and a few dozen other movies in which he plays a grizzled cop or avenging widower or ex-con turned role model (for real) he'd find time for this.

The prospect of two such formidable temples of cheese – the "Left Behind" franchise and Nic Cage – collaborating is not without the high potential to become a religious-themed bomb, "Battlefield Earth" for Christians. There is such a thing as trying too hard, and it doesn't get much more overwrought than the human meme generator taking on the prophecies of a man who seriously believes in "the satanically inspired, centuries-old conspiracy to use government, education, and media to destroy every vestige of Christianity within our society and establish a new world order." Combining those two is like a steel cage match of crazy.

Frankly, if you're going to reboot a series, I imagine it'd be far more lucrative to just send Buck Williams back to high school for a good old-fashioned, product tie-in rich origin story. I'm sure the angels drink Sprite and Logan Lerman's not getting any younger, guys. But if there's a grown-up reimagining of one of the most unusual blockbusters God ever created, it's somehow only fitting that Nic Cage – former sorcerer and Ghost Rider — would be the star. His recent movie history certainly reads like a harbinger of the End of Days anyway. And  while his latest endeavor may not summon the Beast, it's a fair bet that it represents a little death for all our moviegoing brain cells.