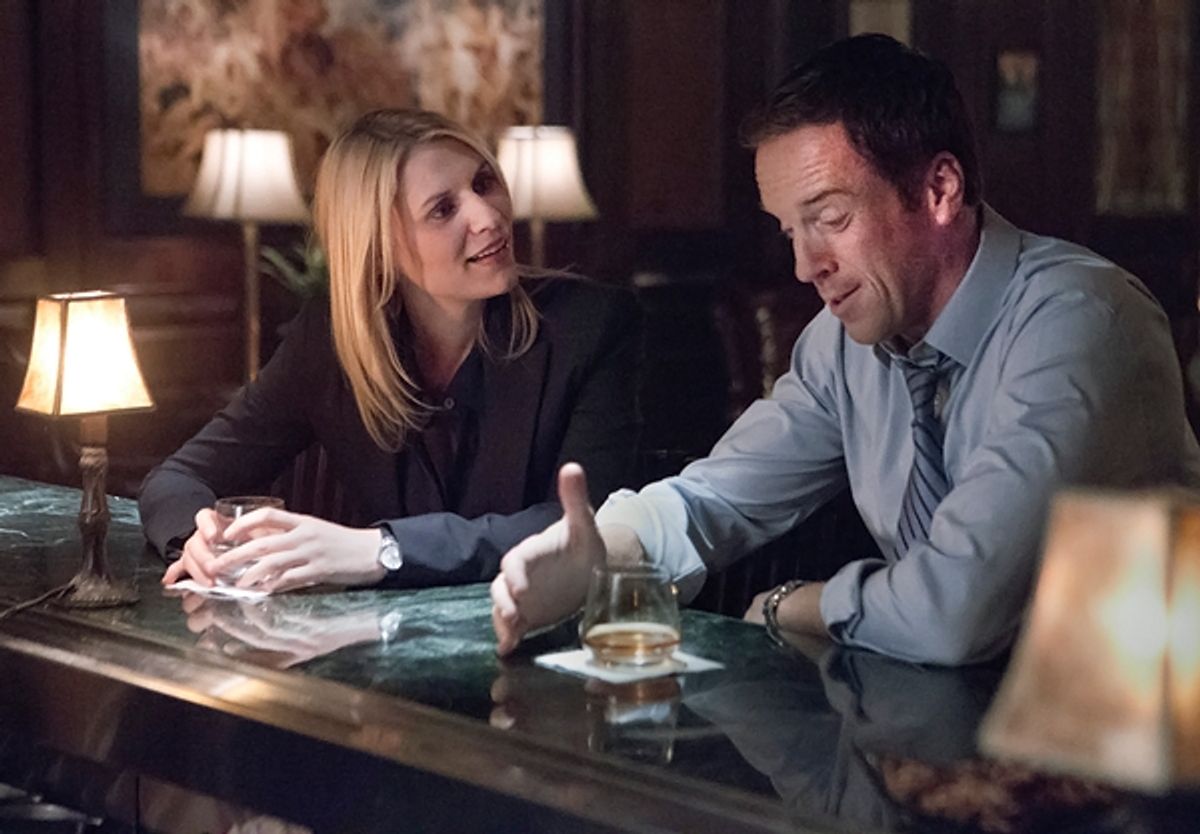 “Homeland” has always been a thrilling show, but last night it outdid itself — not with anything as claustrophobic as least year’s suicide-vest bunker scene or the threat of violence, but by brazenly debunking any expectations about where and at what speed it's headed. At the beginning of the episode, the CIA was setting up a covert surveillance team on Brody, in hopes that he would lead them directly to his handlers and Abu Nazir’s new plot against America. This is a story line that most shows would devote at least a few episodes to. Not “Homeland,” which had spent much of last season surveilling Brody. By the end of the episode, Carrie — deciding, perhaps wrongly, that Brody had made her — went up to his hotel room and confronted him. “It reeks, you know, your bullshit,” she said. Letting loose her anger, she went in on high, beginning, “Do I want to be friends with a demented ex-soldier who hates America?” Surprised by her vitriol, Brody said, “I liked you, Carrie.” “I loved you,” she spat back. The agents stormed the room, threw a hood over his head, and took him away. Brody is now in custody and whatever I imagined this season would look like disappeared as well. Who knows what comes next? What a great feeling.

The episode was stellar before the final confrontation. The return of Virgil! The adorable teen romance between Dana and Finn! The new agent, Peter Quinn (Rupert Friend), tasked by Estes to run the op, may be covered in new car smell, but he's sharp and hilarious. Though far more disciplined than Carrie, Peter’s the most Carrie-like of any of the agents we’ve seen, insofar as he is untroubled by decorum.  “You were fucking him, huh?” he asks Carrie about Brody. She takes offense and counters “Who are you fucking?” “An ER nurse. I’m not that into her,” he calmly replies. Later, he asks whether Brody was “work or love.” Carrie refuses to answer, and retorts: “What are we, girlfriends?” On just about any other show — certainly on a network series — when Brody later sat at his hotel bar, alone, playing with his phone, and called Carrie, not his handler, Peter would have vocalized the callback, muttering “love” to himself. But “Homeland’s” not a network show, and we were left to make the connection all by ourselves.

And love, the possibility that real love could still exist between Brody and Carrie, is the crazy, implausible miracle at “Homeland’s” heart. Consider how insane-but-somehow-real-seeming it was that Carrie would say “I loved you” to a man she was about to have taken into custody. Consider how insane-but-somehow-real-seeming it was that in the beat following Carrie’s declaration, right before the CIA agents stormed in, it looked like Brody was considering kissing her. Having just been made as a terrorist, with the CIA about to come barreling in the door, Brody was considering laying one on the woman who had just exposed him, on the women whom he had made doubt her own sanity, on the woman who had just suggested he might kill her and try to make it look like rough sex. The fact that such a moment is possible — that they seemed like they might kiss, that they seemed like they might want to kiss, that we might want them to kiss — is so implausible, and yet also undeniable. Brody and Carrie are drawn to each other as strongly and surely as moths to the bug zapper: It’s in their nature to convince themselves it just might be the moon they’re heading for instead.

Lest I begin to think so too, I remind myself that "Homeland" co-creator Alex Gansa has described this season many, many times, as being about Carrie and Brody’s “doomed love affair.” He has also often said the series “elevates” when Carrie and Brody are on-screen together — as it did last night — and it is essentially his and co-creator Howard Gordon’s job to make that happen as much as possible. But the Brody-Carrie chemistry that heightens everything it touches is basically a fluke. I’m surfacing a part of an interview that I did with Gansa and Gordon earlier this year to highlight just how unexpected it was.

Have you thought about when the show will have to end? Like, how long it can go on?

Alex Gansa: We’re all aware that there is a finite shelf life here to the Brody-Carrie story. I hope that we’ve told two really compelling seasons of that doomed love affair. And I think it’s a legitimate question about how long that can be the story that we’re telling. Luckily for us we have a franchise here, which is Carrie Mathison and Saul Berenson, a CIA agent chasing bad guys. I think that this show has a life beyond Brody, and when that life starts is an open question, even for us right now.

How much do you think of it as being a doomed love affair?

Gansa: A lot of it. I think when those two characters are on-screen that’s when the show elevates. And if you look at the first season, I think about that scene in the pilot, I think about that scene in the parking lot, after the support group, and I think of the entire episode when they’re out at the cabin. Those are moments for me, you talk about unexpected, those are the moments I was surprised at the connection between these two people. And once you saw that and how that played it completely influenced the rest of the year, it has certainly influenced the second season which is 100 percent about that doomed love affair.

Did you always know the romance would be an element?

Gansa: One thing that was a great surprise, and again Howard talked about luck, this is what it means to have a successful show on the air, and that is, so many things went right in the process of putting this show together, a lot of which were completely and utterly beyond our control, and certainly nothing we could have predicted. We cast Claire and Damian in these two roles, two people who had never spent a minute in each other’s company before they came onto this show, and who knew what they would be like together? You just had no idea, until lo and behold where they’re sitting across from each other in the interrogation-debrief situation in the pilot. And as you’re watching the dailies the word "chemistry" is just flashing on the screen above these two people. And you just never could have predicted that. If these two people did not turn each other on on-screen, the series would have collapsed under its own weight at that point, but because they did and they do have this wonderful energy with each other, it completely influenced how we wound up telling the story throughout the season.

Who could possibly wait for next week?