Is Arizona trying to steal the Grand Canyon?

A measure on the 2012 ballot claims sovereignty over all land, air, and water in the state 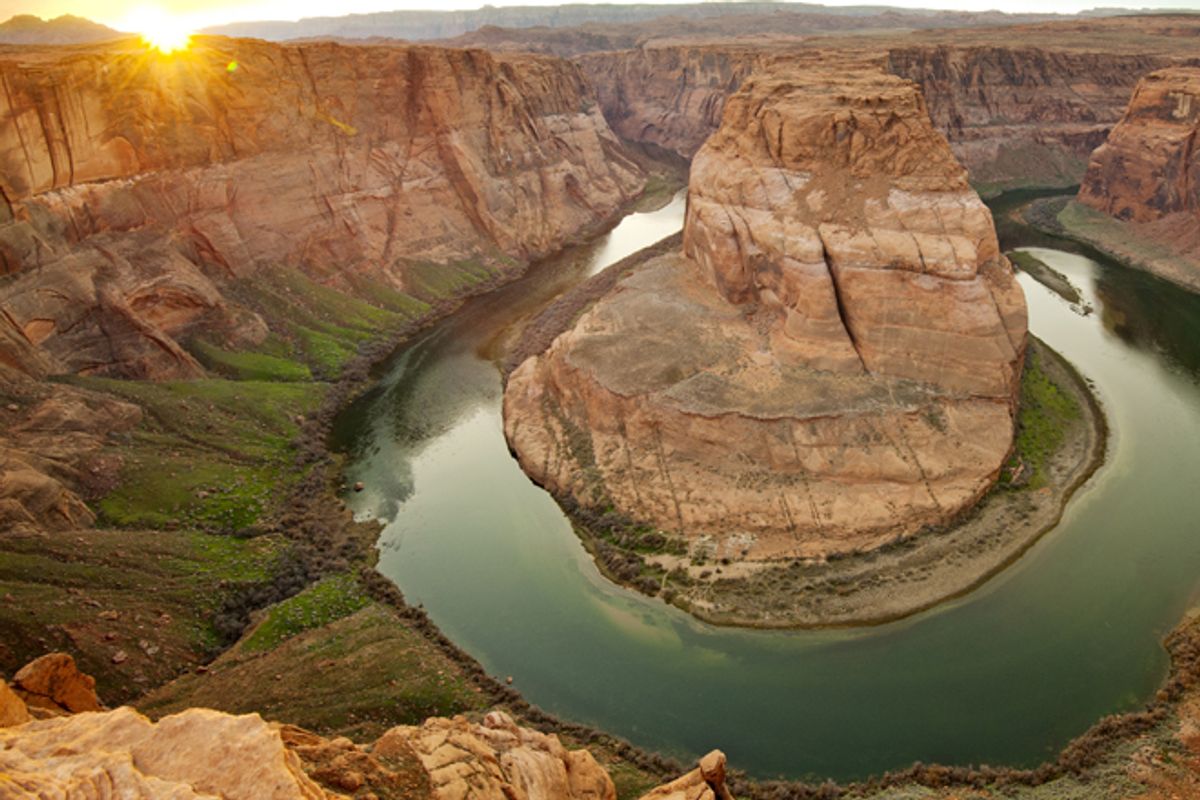 When Teddy Roosevelt dedicated the Grand Canyon as a national protected monument in January of 1908, he declared, “Let this great wonder of nature remain as it now is. Do nothing to mar its grandeur.” But if Arizona voters approve Proposition 120 on Election Day, they'd create a precedent that may one day be used to take the natural wonder away from the federal government and enstrust it with the people who sold off their own state house for quick buck: Arizona's state legislature.

Proposition 120, the Arizona Declaration of State Sovereignty Amendment, "declares [Arizona's] sovereign and exclusive authority and jurisdiction over the air, water, public lands, minerals, wildlife and other natural resources within its boundaries." The language makes specific exemptions for Indian reservations, along with “lands of the United States...pursuant to Article 1, Section 8, Clause 17” of the U.S. Constitution. That clause gives the federal government power over lands “purchased by the Consent of the Legislature of the State in which the Same shall be, for the Erection of Forts, Magazines, Arsenals, dock-Yards, and other needful Buildings.”

So military installations are clearly still Washington's, but other federal lands, including national parks, are a bit of a grey area. The measure, which was placed on the ballot by the Republican-controlled state legislature, is an outgrowth of the radical view of states' rights that came en vouge with the Tea Party. Prop 120 touches on neo-nullificationism, a doctrine holding (erroneously) that states can exempt themselves from federal laws they don’t like, along with Tentherism, the judicial philosophy that much of the federal government’s activities undertaken over the past 100 years have been unconstitutional.

As E.J. Perkins, a policy analyst at Arizona State University’s Morrison Institute for Public Policy, wrote in of the ballot measure: “Some advocates [of Prop 120] question the legality of lands designated as national parks. They point out that the federal government never purchased this property from the state nor sought consent of the Legislature as required under Article 1 of the U.S. Constitution.”

Lawmakers who support the bill generally focus on a much narrower and more obscure issue: They say Arizona currently isn’t allowed to exercise as much control over its lands as other states and claim the ballot measure is a message to Washington to back off. But environmental advocates are worried. The Arizona Wilderness Coalition argues that the ballot measure could lay the legal groundwork for Arizona to demand that all the land in Arizona -- including national parks like the Grand Canyon -- be turned over to state or private ownership. “The intent is to gain control of national parks, forests, monuments, and wildlife refuges in Arizona and undermine protections provided by federal law,” the Sierra Club’s Grand Canyon Chapter warns.

Even one of the supporters of Prop 120 listed on the Secretary of State’s official voting guide hints at this: “Congress has NO authority to establish a National Forest Service or National Park Service and all land inside Arizona belongs to the citizens of Arizona.”

And even if the measure turns out to be not an unconstitutional land grab for national parks but merely an unconstitutional land grab for other federal lands and resources, it could still spell real trouble. Proponents of the measure said they were inspired by the federal government's mishandling of a recent major wildfire on federal lands, but have so far failed to explain why they think the state would be better able to deal with wildfires. “The truth is, even all of the state’s fire departments could not mobilize [enough resources]... I mean, how in the world could we respond to that, and then secondly, how in the world could we afford it?” Democratic state Rep. Tom Chabin told the Capitol Times.

Moreover, because Prop 120 would give Arizona exclusive legal authority over all the air and water in the state, it could jeopardize federal environmental laws like the Clean Air Act, Endangered Species Act, and Clean Water Act. And that may be precisely the intent! Republican State Rep. Sylvia Allen, who believes the earth she wants to protect is 6,000 years old, suggested as much in a statement included in the state's official voting guide: “The EPA threatens to close coal-generating power plants with excessive regulations. Closing these plants will result in higher utility costs for everyone.”

There’s no polling on the proposition’s chances of succeeding at the ballot, but passage seems at least plausible in the often kookily conservative state. Even if does pass, however, the measure is almost certain to end up in federal court, where it will likely be struck down as a violation of the Constitution's Supremacy Clause, which says states cannot disregard the will of the federal government. The Grand Canyon should be safe for now.