Blaming the rising power for our troubles is dangerous and just plain dumb: The U.S. needs a strong China 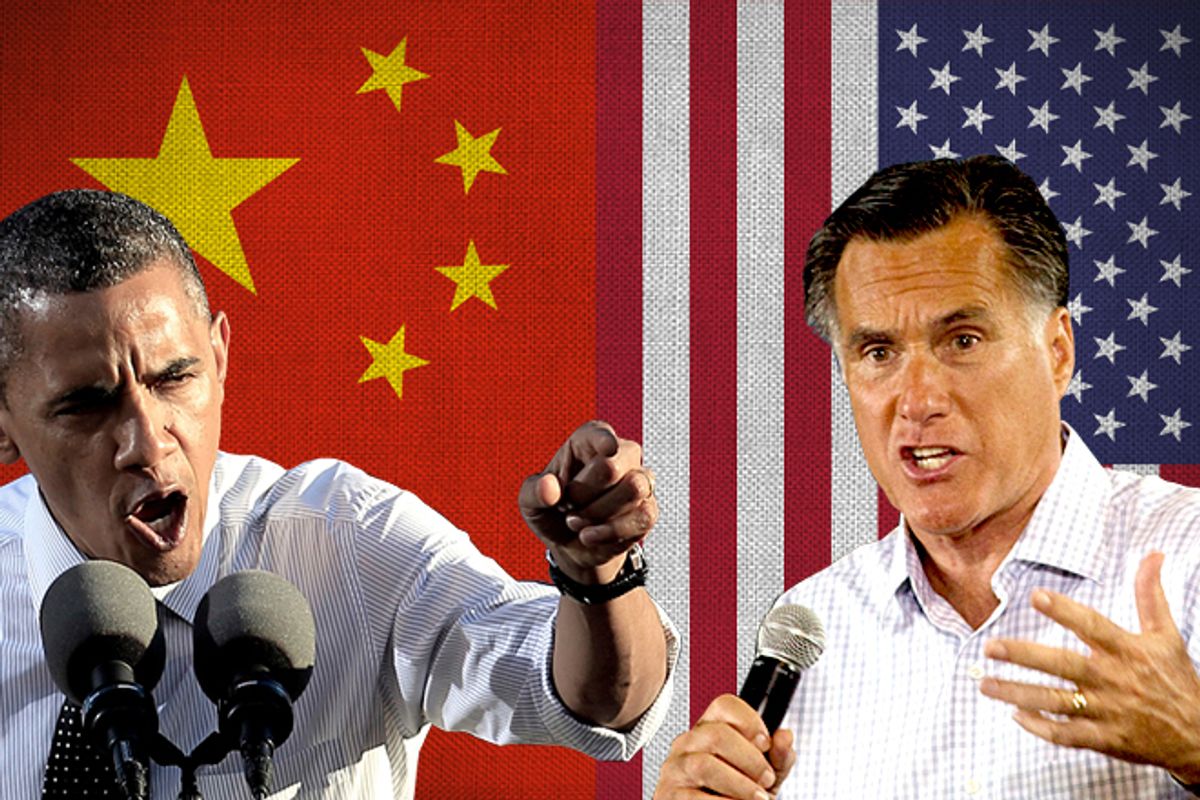 In tonight’s presidential debate on foreign policy, we’ll likely hear plenty of China bashing from both Barack Obama and Mitt Romney: Expect an earful about trade "cheating" and "currency manipulation," and about how the candidates will "get tough" on the rising superpower.

The routine scapegoating of China -- which no less a figure than Henry Kissinger, the architect of U.S. rapprochement with Beijing in the 1970s, has called “extremely deplorable” -- is targeted at vulnerable people who have suffered deeply from the effects of the economic recession.

Demagogic attacks by both campaigns on China are particularly dangerous since they play into often unspoken but prevalent anti-Asian racial prejudices in various parts of the United States.  American leaders should try to overcome the sad history of anti-Asian prejudice, not exploit it for political gain.

Perhaps the only consolation one can take in this season of China bashing is that it may finally force a badly needed national debate on U.S. policy toward China.

With respect to national security, the Obama administration benignly describes its large-scale military buildup in the Pacific as a “strategic pivot” to Asia or “rebalancing” U.S. forces.  Both terms are euphemisms that mask the reality of current policy.  We are now implementing an aggressive containment strategy that stimulates China’s military modernization and its own preparations for war.

Increased tensions with China could have a number of dire outcomes.  They could lead to serious military conflict over Taiwan’s political status, over whether Japan or China holds sovereignty to several uninhabitable islands in the East China Sea, or over the ownership of small islands and energy resources in the South China Sea.  In a worst case, those conflicts could escalate, by accident or design, to a nuclear exchange.

Not satisfied with the pace of the Obama administration’s buildup in Asia, Gov. Romney calls for an even stronger U.S. presence in the Pacific to threaten China more severely with America’s military might.

On economic issues, both campaigns play to voters who believe that China’s rise is occurring at America’s expense.  Just the opposite is true.  China’s rise strengthens America’s economy and future prosperity.

Yet both campaigns are striving to outdo each other in demonizing China on trade issues.  Gov. Romney promises to declare China a “currency manipulator” and unilaterally impose punitive tariffs on Beijing.  Those tariffs would violate America’s solemn legal obligations to the World Trade Organization, recklessly risk a trade war,  and contradict July’s assessment by the International Monetary Fund that China’s currency is only “moderately undervalued.”

The Obama administration attacks China for “illegal subsidies” to expand auto exports while simultaneously taking credit for the bailout of the U.S. auto industry – a huge subsidy – that has left American taxpayers on the hook for $25 billion.

Both campaigns ignore the fact that increased American military pressure on China strengthens the Chinese Communist Party.  China’s leaders use the “U.S. threat” to justify draconian security measures at home to repress human rights and democracy.

As former Soviet dissident Natan Sharansky has cogently explained, the “most dependable weapon” available to an authoritarian regime is an external security threat that can unify the people and legitimize internal political repression.

Clearly, we need a national debate about U.S. China policy to prevent doing permanent damage to American interests in Asia.  We need to rethink our current policy to avoid a new Cold War and to benefit economically from China’s rise so as to strengthen America’s security and prosperity.

The best way to overcome the “China threat” and advance U.S. interests in the region is by achieving a stable peace with China through the resolution of outstanding security and economic conflicts between the two countries.

We should keep in mind the profound words of President Bill Clinton:

“Some Americans believe we should try to isolate and contain China because of its undemocratic system and human rights violations, and in order to retard its capacity to become America’s next great enemy ... [This] would not make the world safer.  It would make it more dangerous.  It would undermine rather than strengthen our efforts to foster stability in Asia … It would hinder not help the cause of democracy and human rights in China … It would cut off, not open up, one of the world’s most important markets.  It would encourage the Chinese to turn inward and to act in opposition to our interests and values.”

Donald Gross is a former White House and State Department official. His new book, The China Fallacy: How the U.S. Can Benefit from China’s Rise and Avoid Another Cold War, will be published by Bloomsbury on October 25. See www.donaldgross.net.