A debate to be ashamed of

On drones, Israel and Iran, Obama and Romney revealed shockingly similar policies -- both of them hawkish 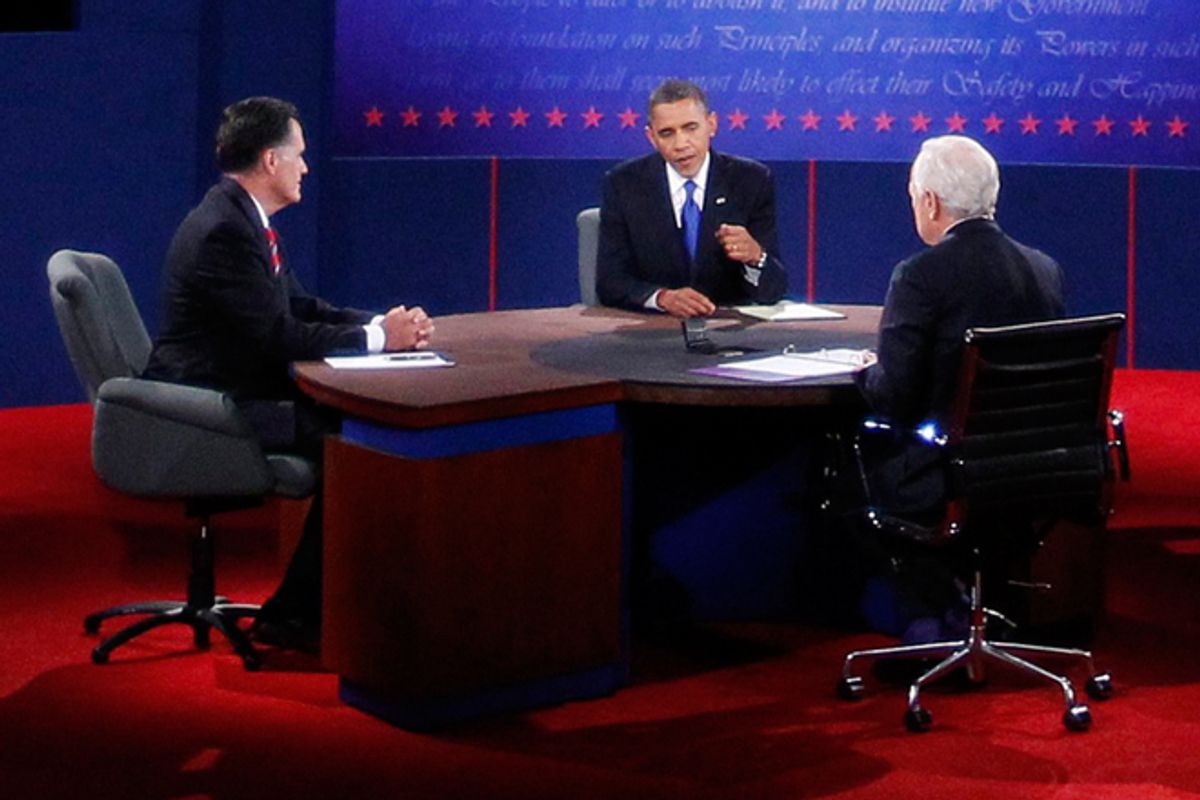 It was the moment progressives had been waiting for. Bob Schieffer turned to Mitt Romney and said, "What is your position on the use of drones?"

Twitter gasped. Up to that point, Schieffer had thrown one softball after another, but here was the high hard one down the middle. For many liberals, President Obama's aggressive deployment of drones to kill suspected terrorists in northwestern Pakistan is a stain on the current administration that cannot be washed away, a profound betrayal of civilized values. A campaign of murder from the skies in a country that is supposedly our ally -- how is this remotely conscionable?

But liberals are also accustomed to Obama getting a free pass on the topic from the mainstream media and political elite. So just hearing the word "drones" spoken was shocking -- here it was, finally, a chance to address this ongoing national shame before an audience of millions and millions of Americans.

And then came Romney's response, which basically boiled down to drones are awesome!

Well, I believe that we should use any and all means necessary to take out people who pose a threat to us and our friends around the world. And it’s widely reported that drones are being used in drone strikes, and I support that entirely and feel the president was right to up the usage of that technology and believe that we should continue to use it to continue to go after the people who represent a threat to this nation and to our friends.

End of discussion. Obama did not even mention the word "drones" in his follow-up to Romney's comments, aside from a vague "we’re always also going to have to maintain vigilance when it comes to terrorist activities." And all those progressives whose ears had perked up when Schieffer raised the issue returned to their default position: soul-killing despair.

There were numerous other instances during the debate when the two candidates vied with each other to express hard-line positions on issues that drive progressives crazy. The fight to see who could declare himself the greater friend to Israel, and the (closely related) struggle to establish who supports the most "crippling" sanctions on Iran come immediately to mind.

OBAMA: Israel is a true friend. It is our greatest ally in the region. And if Israel is attacked, America will stand with Israel. I’ve made that clear throughout my presidency.

OBAMA: We then organized the strongest coalition and the strongest sanctions against Iran in history, and it is crippling their economy. Their currency has dropped 80 percent. Their oil production has plunged to the lowest level since they were fighting a war with Iraq 20 years ago. So their economy is in a shambles.

ROMNEY: Crippling sanctions are something I’d called for five years ago ... And they do work. You’re seeing it right now in the economy. It’s absolutely the right thing to do to have crippling sanctions. I’d have put them in place earlier, but it’s good that we have them.

And so on. I'm not sure if there's ever been a debate in which the two candidates expressed so much fundamental agreement on major foreign policy issues. But nothing underscores the dilemma that progressives face on the lack of a meaningful foreign policy choice more than the exchange on drones. Romney's endorsement of drone warfare laid out with perfect clarity why President Obama has been free to pursue policies -- extrajudicial assassination of American citizens, drone warfare, detention without trial -- that appear to clearly violate basic human rights, not to mention the U.S. Constitution.

He can do so because he is never going to be questioned from the right on such tactics.

Quite the contrary; the main line of attack is to berate Obama for being too soft. Ponder this: In the same debate in which Romney applauded the president for using "any and all means necessary to take out people who pose a threat to us," he also slammed Obama for his "apology tour" throughout the Arab world. If you're perplexed at how to reconcile Obama's drone war of terror in Waziristan with the idea that he's been wandering the globe saying "I'm sorry" to our enemies, well, join the crowd. It's not easy.

It was probably always true that a president whose middle name was Hussein would be required to protect his flank from the right more than the left on foreign policy issues related to the Mideast. It's also true that when voters are asked to rank what issues they think are most important, the moral ambiguity of drone warfare doesn't register anywhere close to the top 10. One can also make a realpolitik argument that targeting al-Qaida networks with drone bombs in Pakistan is a much smarter and more efficient use of resources than invading an entire country that had no connection whatsoever to the 9/11 attacks.

But the stain remains. And no matter how sincerely Obama touts his record supporting democracy during the Arab Spring in countries such as Egypt and Tunisia; no matter how strong a case can be made that intervening in Libya to prevent a likely horrendous massacre of civilians by Gadhafi was justifiable; the net effect of Obama's foreign policy, in Afghanistan and Pakistan, and in Israel and Iran, is to breed more resentment and hatred of the U.S. in the Islamic world.

We could use a real debate on how to resolve that paradox. But we're not going to get one.