A last-ditch pitch to women

Obama and Romney threw in as many references to women as possible, just in case 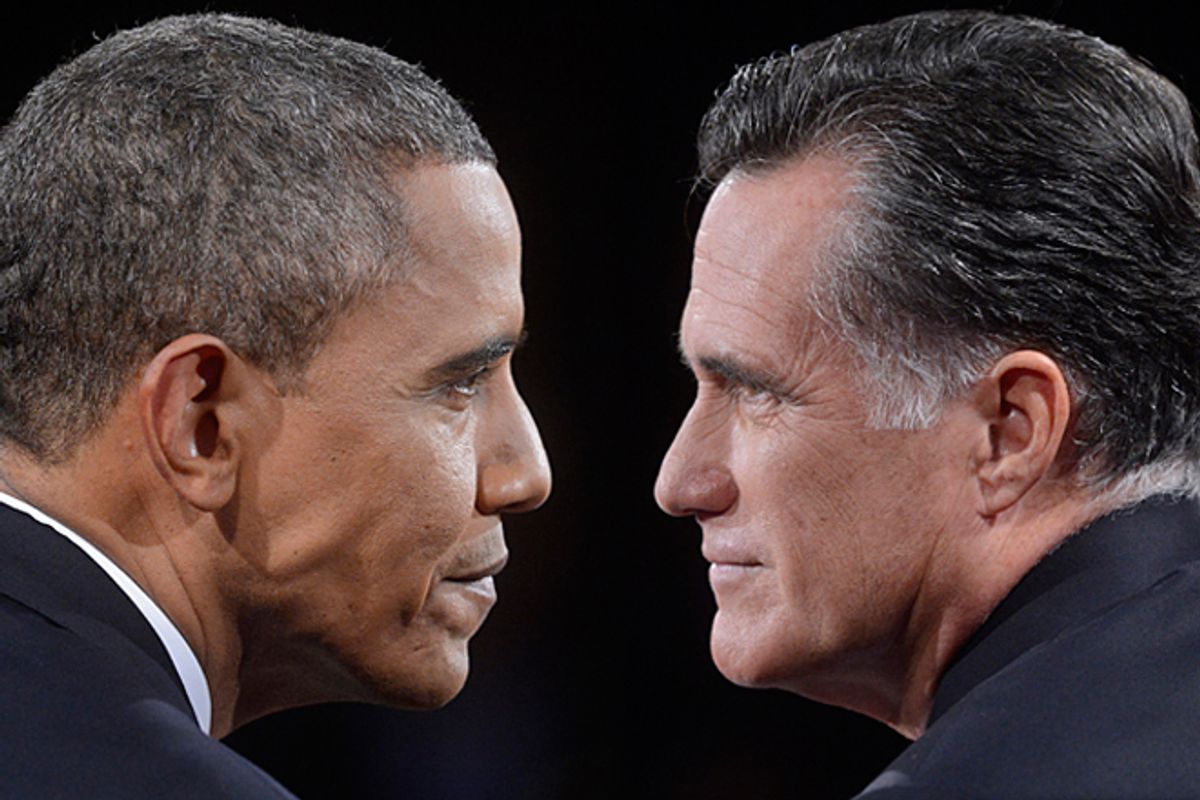 "Governor, the problem is, is that on a whole range of issues, whether it's women, whether it’s women getting equal pay, whether it’s reproductive rights, whether it’s women who are going to vote for me and not you no matter what you say, you’ve been all over the map. I mean, I’m pleased that you now are endorsing our policy of acknowledging women are people and potentially having bilateral discussions with the Republicans to end their war on women."

OK, so that's not exactly what Barack Obama said. But despite the actual proper nouns having been the Middle East, Afghanistan, Iraq and the Iranian nuclear program, the president lost no opportunity to bring up the ladies. Both candidates know there's a historic gender gap; both candidates have seen the data that shows that Obama's initially massive lead with women is narrowing while Romney retains a general advantage with men. Are those women happy when they hear that Romney wants "gender equality" (his words, not mine) after the Arab Spring? Might as well try, after the missed opportunities of the first debate and the frantic catch-up of the second.

We didn't hear about Malala Yousufzai, the courageous Pakistani teenager who was shot in the head by the Taliban, or the global gag rule, which Romney has promised to reinstate and which would curtail family planning access in the developing world by punishing groups that advocate for safe and legal abortion. When Mitt Romney became the first to throw women a bone by bringing up the "opportunity for greater participation on the part of women," he didn't talk about how greater participation is partly predicated on access to healthcare and self-determination, because that would be awkward. Obama did hint at it with his mention of "the social policies of the 1950s."

We heard a total of nine vague mentions, most of them from Obama. "We do have to make sure that we’re protecting religious minorities and women because these countries can’t develop unless all the population — not just half of it — is developing," Obama said. In Egypt, he said, "we have put significant pressure on them to make sure they’re doing that — to recognize the rights of women, which is critical throughout the region."  And in Somalia, Yemen and Pakistan, he said, priorities included "to make sure that they are treating women with the kind of respect and dignity that every nation that succeeds has shown." Nick Kristof, can you hear me?

When real people came up, they were female. Romney went first, with this rote stammer: "I — I met a young woman in — in — in Philadelphia who’s coming out of — out of college, can’t find work. I’ve been — Ann was with someone just the other day that was just weeping about not being able to get work."  Female joblessness was on message, and in a swing state no less, but Obama one-upped him with an anecdote that began, "After we killed bin Laden," and ended with a young woman thanking him. Yes, women were rhetorical pawns for both. But the substantive difference between the candidates is clear to anyone who actually cares about women beyond the points-scoring.