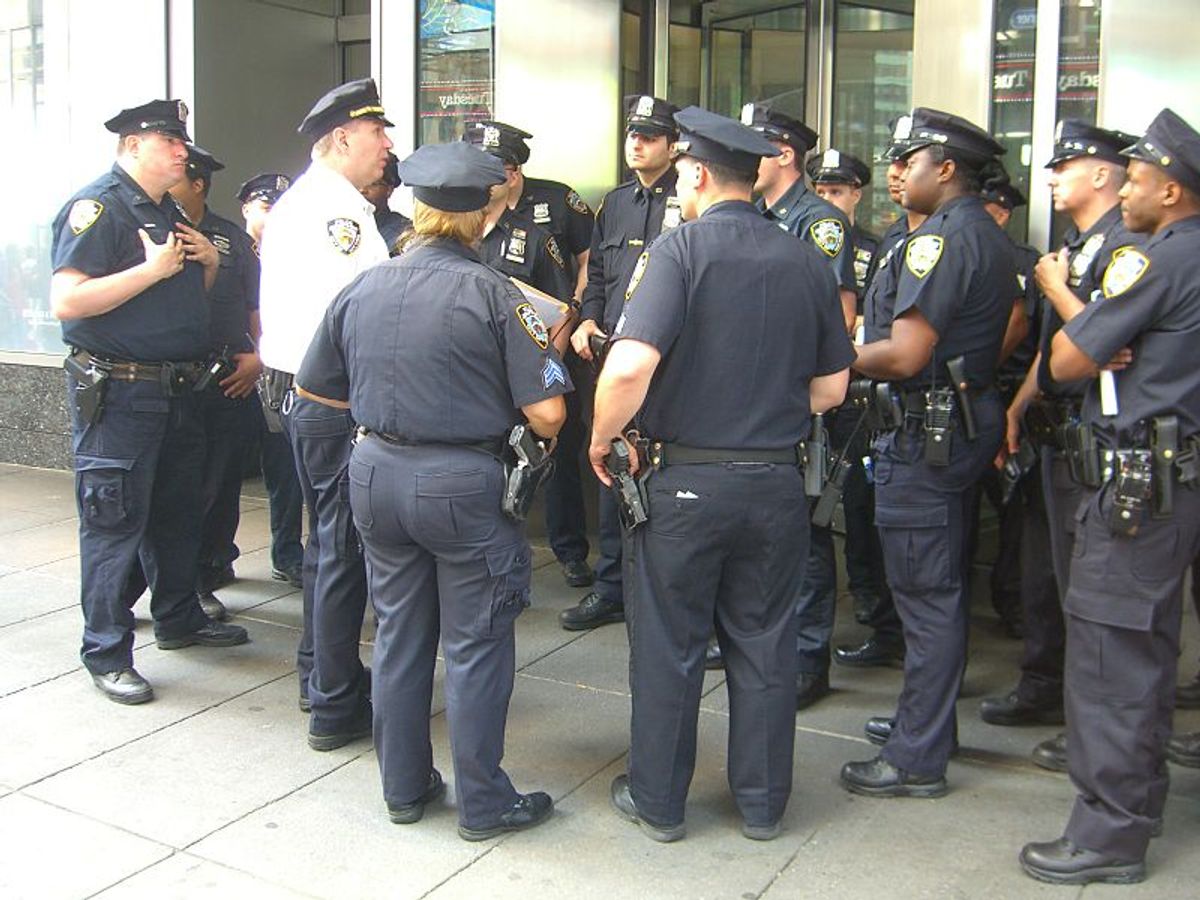 NEW YORK (AP) — A paid informant for the New York Police Department's intelligence unit was under orders to "bait" Muslims into saying inflammatory things as he lived a double life, snapping pictures inside mosques and collecting the names of innocent people attending study groups on Islam, he told The Associated Press.

Shamiur Rahman, a 19-year-old American of Bengali descent who has now denounced his work as an informant, said police told him to embrace a strategy called "create and capture." He said it involved creating a conversation about jihad or terrorism, then capturing the response to send to the NYPD. For his work, he earned as much as $1,000 a month and goodwill from the police after a string of minor marijuana arrests.

"We need you to pretend to be one of them," Rahman recalled the police telling him. "It's street theater."

Rahman said he now believes his work as an informant against Muslims in New York was "detrimental to the Constitution." After he disclosed to friends details about his work for the police — and after he told the police that he had been contacted by the AP — he stopped receiving text messages from his NYPD handler, "Steve," and his handler's NYPD phone number was disconnected.

Rahman's account shows how the NYPD unleashed informants on Muslim neighborhoods, often without specific targets or criminal leads. Much of what Rahman said represents a tactic the NYPD has denied using.

The AP corroborated Rahman's account through arrest records and weeks of text messages between Rahman and his police handler. The AP also reviewed the photos Rahman sent to police. Friends confirmed Rahman was at certain events when he said he was there, and former NYPD officials, while not personally familiar with Rahman, said the tactics he described were used by informants.

Informants like Rahman are a central component of the NYPD's wide-ranging programs to monitor life in Muslim neighborhoods since the 2001 terrorist attacks. Police officers have eavesdropped inside Muslim businesses, trained video cameras on mosques and collected license plates of worshippers. Informants who trawl the mosques — known informally as "mosque crawlers" — tell police what the imam says at sermons and provide police lists of attendees, even when there's no evidence they committed a crime.

The programs were built with unprecedented help from the CIA.

Police recruited Rahman in late January, after his third arrest on misdemeanor drug charges, which Rahman believed would lead to serious legal consequences. An NYPD plainclothes officer approached him in a Queens jail and asked whether he wanted to turn his life around.

The next month, Rahman said, he was on the NYPD's payroll.

In an Oct. 15 interview with the AP, however, Rahman said he received little training and spied on "everything and anyone." He took pictures inside the many mosques he visited and eavesdropped on imams. By his own measure, he said he was very good at his job and his handler never once told him he was collecting too much, no matter whom he was spying on.

Rahman said he thought he was doing important work protecting New York City and considered himself a hero.

One of his earliest assignments was to spy on a lecture at the Muslim Student Association at John Jay College in Manhattan. The speaker was Ali Abdul Karim, the head of security at the Masjid At-Taqwa mosque in Brooklyn. The NYPD had been concerned about Karim for years and already had infiltrated the mosque, according to NYPD documents obtained by the AP.

Rahman also was instructed to monitor the student group itself, though he wasn't told to target anyone specifically. His NYPD handler, Steve, told him to take pictures of people at the events, determine who belonged to the student association and identify its leadership.

On Feb. 23, Rahman attended the event with Karim and listened, ready to catch what he called a "speaker's gaffe." The NYPD was interested in buzz words such as "jihad" and "revolution," he said. Any radical rhetoric, the NYPD told him, needed to be reported.

Talha Shahbaz, then the vice president of the student group, met Rahman at the event. As Karim was finishing his talk on Malcolm X's legacy, Rahman told Shahbaz that he wanted to know more about the student group. They had briefly attended the same high school in Queens.

Rahman said he wanted to turn his life around and stop using drugs, and said he believed Islam could provide a purpose in life. In the following days, Rahman friended him on Facebook and the two exchanged phone numbers. Shahbaz, a Pakistani who came to the U.S. more three years ago, introduced Rahman to other Muslims.

"He was telling us how he loved Islam and it's changing him," said Asad Dandia, who also became friends with Rahman.

Secretly, Rahman was mining his new friends for details about their lives, taking pictures of them when they ate at restaurants and writing down license plates on the orders of the NYPD.

On the NYPD's instructions, he went to more events at John Jay, including when Siraj Wahhaj spoke in May. Wahhaj, 62, is a prominent but controversial New York imam who has attracted the attention of authorities for years. Prosecutors included his name on a 3 ½-page list of people they said "may be alleged as co-conspirators" in the 1993 World Trade Center bombing, though he was never charged. In 2004, the NYPD placed Wahhaj on an internal terrorism watch list and noted: "Political ideology moderately radical and anti-American."

That evening at John Jay, a friend took a photograph of Wahhaj with a grinning Rahman.

Rahman said he kept an eye on the MSA and used Shahbaz and his friends to facilitate traveling to events organized by the Islamic Circle of North America and Muslim American Society. The society's annual convention in Hartford, Conn, draws a large number of Muslims and plenty of attention from the NYPD. According to NYPD documents obtained by the AP, the NYPD sent three informants there in 2008 and was keeping tabs on the group's former president.

Rahman was told to spy on the speakers and collect information. The conference was dubbed "Defending Religious Freedom." Shahbaz paid Rahman's travel expenses.

Rahman, who was born in Queens, said he never witnessed any criminal activity or saw anybody do anything wrong.

He said he sometimes intentionally misinterpreted what people had said. For example, Rahman said he would ask people what they thought about the attack on the U.S. Consulate in Libya, knowing the subject was inflammatory. It was easy to take statements out of context, he said. He said wanted to please his NYPD handler, whom he trusted and liked.

"I was trying to get money," Rahman said. "I was playing the game."

Rahman said police never discussed the activities of the people he was assigned to target for spying. He said police told him once, "We don't think they're doing anything wrong. We just need to be sure."

On some days, Rahman's spent hours and covered miles in his undercover role. On Sept. 16, for example, he made his way in the morning to the Al Farooq Mosque in Brooklyn, snapping photographs of an imam and the sign-up sheet for those attending a regular class on Islamic instruction. He also provided their cell phone numbers to the NYPD. That evening he spied on people at Masjid Al-Ansar, also in Brooklyn.

Rahman said he eventually tired of spying on his friends, noting that at times they delivered food to needy Muslim families. He said he once identified another NYPD informant spying on him. He took $200 more from the NYPD and told them he was done as an informant. He said the NYPD offered him more money, which he declined. He told friends on Facebook in early October that he had been a police spy but had quit. He also traded Facebook messages with Shahbaz, admitting he had spied on students at John Jay.

"I was an informant for the NYPD, for a little while, to investigate terrorism," he wrote on Oct. 2. He said he no longer thought it was right. Perhaps he had been hunting terrorists, he said, "but I doubt it."

"I hated that I was using people to make money," Rahman said. "I made a mistake."