It started out as the greatest free resource on the Web. But now the encyclopedia is drawing profit-seeking writers 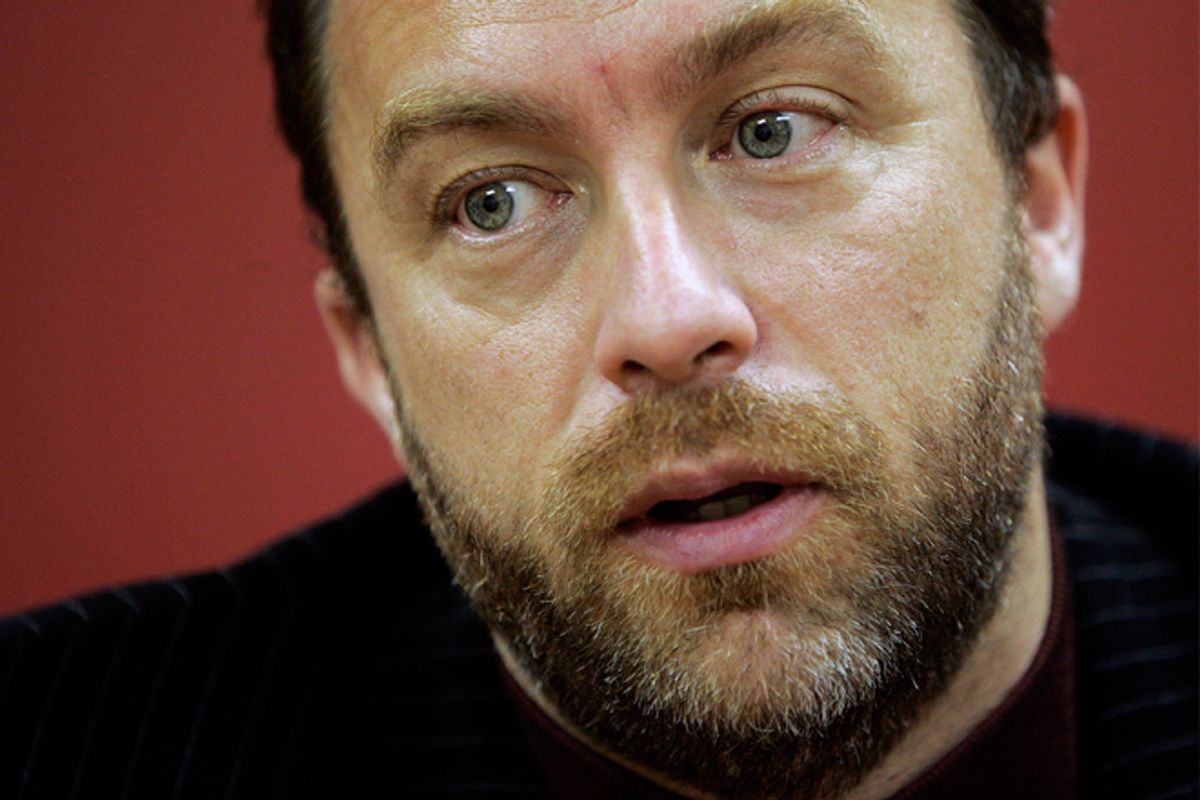 When it began 11 years ago, Wikipedia represented utopian ideals: power dispersed more evenly than any democracy, participation open to anyone and work done solely for the promotion of knowledge. But utopian ideals often become diluted when put into practice on a large scale and inevitably fail. Today, to the dismay of many die-hard Wikipedians — the tenacious, voluntary editors who are the site’s backbone — the site also attracts profit-seeking writers.

One such writer is Soraya Field Fiorio, a 27-year-old entertainment-relations consultant who has a sideline in writing commissioned Wikipedia articles for musicians and writers. “Just like when I write press releases, clients say, ‘I want this. I don’t want that.’ So it’s really part of a promotional package,” she said. She charges $30 an hour to edit an existing article, and will write a page from scratch for around $250. It’s not surprising that musicians, writers, artists or anyone else seeking a spot in the public eye will pay for the service: The website is often the No. 1  hit on Google, and the articles can function as the key component of a publicity strategy.

Having commissioned articles on Wikipedia dilutes one of the last respites from commercialization on the Internet. Perhaps worse, these commissioned endorsements are hidden by the guise of pure encyclopedic information.

Jimmy Wales, founder of Wikipedia, came out against paid editing. “But Jimmy Wales does not make those rules anymore,” said David Goodman, who has made over 90,000 edits to Wikipedia since 2005 (making an edit includes anything from uploading a new article to deleting a misplaced comma). “The argument for permitting [paid editing] is that we have no possible way of stopping it.” The identity-masking pseudonyms on Wikipedia are a barrier to forced disclosure of occupation, and are also a prized symbol of the notoriously elusive Wikipedian community.

The grey market of commissioned Wikipedia writing isn’t an isolated phenomena: It is a trend connected to deeper troubles bubbling behind the scenes of the world’s most frequently used reference site. Wikipedia is not user-friendly, and the shrinking group of voluntary editors is dominated by middle- to upper-class white men.

Field Fiorio first delved into Wikipedia with the task of giving an underrepresented community voice: feminist academics. At the time she worked as the assistant to the chair of the Gender Studies program at the New School in New York City, where she was a student. Part of her work was to update and correct professors’ pages, and she found that the most difficult entries were on the outspoken feminist professors. Monetary payment is not the only thing that can influence an editor’s vested interest — political beliefs and social leanings also have an impact. “There is a lot of misogyny on the site,” she said.

For example, even tiny grammatical edits were immediately flagged on one particularly well-known feminist professor, and “it was exasperating trying to change larger passages of often erroneous information.” Compared to other academic profiles there was an abnormal amount of information about her personal life. “There was poking at her family background, with elements of anti-Semitism, and mention of her mother, and her failed relationships, which just felt like woman-shaming to me,” said Field Fiorio. And, she says, "It’s a pain-in-the-ass process to make edits. No matter what you do, there’s always something … the Wikipedia community always has time to flag everything that you do, and I don’t know how they have time to do that.”

It took Field Fiorio about six months to hone her Wikipedia skills, which included navigation of the site’s back pages, proper citation methods (which she says her M.A. in history was useful for), writing with encyclopedic neutrality and arguing with Wikipedians who questioned her edits. Arguments over an article’s validity — called “edit wars,” when escalated — take place on the “articles for deletion page,” which new-media researcher and author Andrew Lih describes as Wikipedia’s “virtual town square.” In a sort of cyberform of direct democracy, editors debate the merits of a topic or article, and vote to decide its fate. The most difficult skill to master wasn’t technological, Field Fiorio learned, it was social; if she failed to stand her ground in debates over articles she wrote, her work would be deleted. Other than having valid citations, there is no clear-cut line on what makes a topic Wikipedia-worthy, and decisions are made on a case-by-case basis, often dependent on how well its merits are argued.

The intimidating and often confusing ways of Wiki-world have created a new iteration of the Ivory Tower it once sought to replace. Instead of academic and professional credentials, one has to have the patience to learn the ways of the insular, anonymous culture that has evolved. The decline of editors is, in the words of the Wikimedia Foundation — the nonprofit organization behind the encyclopedia — an “intractable problem.” And Wikipedians worry that an influx of paid editors could further drive voluntary editors away — doing something for free loses its charm when others are doing the same task for monetary compensation. Without the base of volunteer Wikipedians the site would fall apart.

The Brooklyn-based duo Erez Safar and Aaron Wertheimer, of My Wiki Pro, disclosed their paid status with a notice on their user pages, and found themselves hounded by a Wikipedian who attempted to delete every article they had written. Luckily for them, a more sympathetic cohort of Wikipedians lent them support. “Other editors were checking out the pages and saying that these are actually well sourced and notable, sort of coming to our rescue,” Safar says.

In recent months, discussions over the ethics of commissioned writing and editing have raged in Wiki-world, without any clear resolution. Just one of many recent debates reads more than 120 pages as a Microsoft Word document and concludes that the practice is discouraged, “although it remains unclear exactly what it is that is being discouraged and what form the discouragement is supposed to take,” a discussion moderator notes.

Receiving payment for Wiki-work doesn’t technically break any of the user-generated policies, and the line between writing a neutral encyclopedic article versus a promotional one is not distinct. If Field Fiorio was commissioned to write an article about a musician who qualifies as “notable” — meaning the writer has press articles or other valid sources to cite — the end product, done well, wouldn’t necessarily be more biased than if a voluntary writer added an article about their favorite comic book series, for example.

Safar and Wertheimer say they reject about 80 percent of the requests they’ve received because the subjects were not noteworthy by Wikipedia’s standards. “We make it clear that Wikipedia isn’t a Yellow Pages and we’re not trying to help it become a Yellow Pages, we’re just trying to help people who have been overlooked by the Wikipedia community.”

One member of that community is Luigi Novi, a New Jersey resident and part-time employee at a market research company, who has contributed extensively to Wikipedia’s content on comic books and celebrities since 2005. “Last time I checked I was closing in on 63,000,” he said of his edit count. After checking his iPhone he announced, “I surpassed 63,000.”

“You can be a hobbyist — albeit still a skilled writer — and you can make the most important aspects of a given topic available for other people to use,” he said. “Obviously there is a tremendous feeling of pride in that.” Novi has never received a cent for his Wiki-work, and opposes paid editing as a whole.

The craft of Wiki-editing suits his personality. As a child Novi made cards detailing the biographical information of his favorite cartoon characters, and as an adult he is driven by a compulsion to put things in order, which he likens to the need he feels to improve a disorderly Wikipedia entry. “It’s an addiction,” he said. “There are days I spend hours editing, I’m ashamed to admit.”

“Our projects' success depends on a thriving, diverse, healthy editing community,” notes the Wikimedia Foundation’s 2012-13 annual plan, “and yet editor numbers are declining.” Making the site more conducive to the growth of such community — in other words, making the site more welcoming, socially — is on the foundation’s list of initiatives.

“Some people may think they want to contribute to Wikipedia but can’t quite embrace the culture,” said Susan Hewitt, an active Wikipedian who has made more than 64,000 edits over the past seven years, mostly related to invertebrate zoology. Fondly known as “the Snail Lady,” to her fellow Wikipedians, Hewitt’s informal solution to the decline in editors is what she calls “Wiki Love,” actively encouraging the work of new editors through positive messages on their user pages. She is staunchly against paid editing, citing it as an insult to Wikipedia’s ethos — though her services haven’t been solicited, not surprising given her field of expertise.

To make the site more welcoming would require an enforced shift in its user-generated culture — an impossible-sounding project, particularly with a group who rarely meet in person, and generally only know each other as online avatars. This conundrum has enabled the market in commissioned pieces to thrive.

“The public has a huge stake in how the concept of ethics in Wikipedia and money evolves,” says Pete Forsyth, a former Wikimedia employee and an active voluntary editor. “Even if you never hit the edit button, Wikipedia is something that is affecting his life and her life,” he says, pointing to two strangers in the coffee shop where we spoke. But, he says, few are aware of the issue because discussions have largely remained internal to Wikipedia.

Forsyth runs an independent consulting firm, Wiki Strategies, where he works with universities, nonprofits and private foundations interested in engaging effectively with Wikipedia. Instead of writing articles for clients, he teaches them how to do it themselves.. The fact that universities and other professional institutions seek his guidance speaks for itself. His work was inspired by his belief in Wikipedia’s potential, and the threats to its quality. “If I were to pick one thing to make it easier I actually wouldn’t look at the technology,” he says, “I would look at social patterns.”

To bring Wikipedia back to an oasis from commercialization, it’s not the commissioned editors that should be given attention, but rather the reasons for their success — abrasive discussions, convoluted guidelines, impersonal communication, and so on. In other words, people would be much less likely to pay for an edit if learning the ways of Wiki-world was a painless task. Wikipedians may be their own worst enemy; if they can’t learn to get along, the empire they’ve created may deteriorate.