Donald Trump: The Frankenstein of media 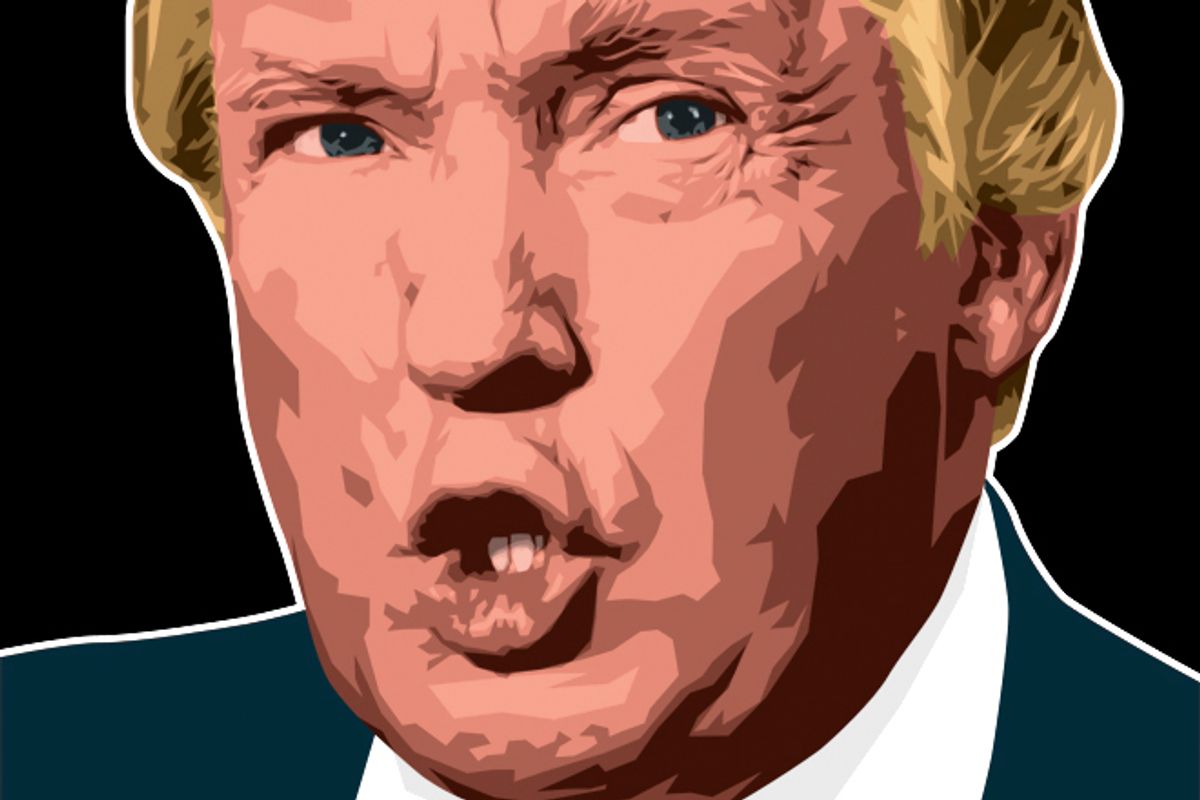 Donald Trump's much hyped, potentially campaign-altering news is that he's offering a $5 million donation to the charity of Barack Obama's choice if the president releases his passport, and college transcript — to Trump's satisfaction. The bombshell, if that word can be used anywhere near this event, is that Trump would withhold making a significant charitable donation in order to keep pushing discredited theories about Obama.

But honestly, what did any of us expect?

Whenever Trump promises big news, there are three things you can expect:

1) It is likely to be of dubious provenance.

2) It is not going to be the politically meaningful event Trump says it will be.

3) Trump, like a hideous car wreck, will be difficult for passersby to ignore.

Trump is willing to traffic in innuendo and racial provocation. And he exaggerates, often in ways that amount to lying. These attributes, most clearly on display during his fake gesture toward a presidential bid, may not be great for his brand. But each of his stunts has won him the attention he craves.

"Just ignore him," you say?

Try telling that to traffic-sensitive news editors. The truth is, Trump is not representative of any legitimate political constituency in America (self-proclaimed-mogul birthers?) and he's very obviously in it for himself. Because of Twitter (and to a lesser extent YouTube), Trump controls the means of production to his most valuable commodity: the sound of his voice. (He's already outsourced his last name, as Michael Barbaro of the Times detailed earlier.)

Sarah Palin used to drive headlines at major news outlets with nearly every Facebook status update -- no 140 character limit to confine her. Trump, though, has gravitated toward Twitter -- by far a much more influential platform for politics.

And he knows this. Trump has bragged that the number of his followers eclipses that of major newspapers. And since we're all there, watching, Trump, the entertainer, entertains, with commentary about Obama, Robert Pattinson and Derek Jeter.

Famous? Yes. Politically relevant? Hardly. He occupies the Twitter-aided nexus of fringy politics and entertainment. He's the guy with his name on buildings, and who's on reality TV. He's famous, as they say, for being famous. His presidential pronouncements are about as ignorable as Kim Kardashians. They mock, but they cover.

Trump, whatever his numerous faults, does have a sense of timing. Today's Big Reveal leverages the notion of the October surprise, that hypothetical late, game-changing electoral event that will eclipse the polls and the gaffes and the conventions and the debates.

Trump is the son of a real estate developer who built solidly middle-class houses in the unglamorous world known as the outer boroughs of New York City. But as a public persona, Trump is the creation of traditional media. Social media has merely amplified him. He is Frankenstein's monster, and you are his creator.

Thanks to a well-watched television show on NBC, Trump has developed a personality somehow associated with the business of making money. It's something everyone cares about! He brutally punishes the incompetent (celebrity incompetents, even better) and, like a dissatisfied father figure, believes strongly in negative reinforcement.

And with a red-state-blue-state nation generally agreeing that Washington is mired in partisan bickering and dysfunction, Trump is able to echo a popular (if not entirely accurate) complaint when he rails against the federal government. He's hardly taking a counterintuitive or controversial stance when he says Washington needs to improve. It is, perhaps, the most salient thing he could say. But it's hardly his marquee message. It's an aside he tosses out on his way to saying something more ... memorable.

Politicians talk about "going over the heads" of media gatekeepers. Trump just sort of clears a path by acting disgusting and, as they clear a path, waltzing right through.

Before conservative columnist George Will called Trump a "bloating ignoramus," Politico, which has 1,405 articles that mention him, asked, "How long will Donald Trump matter in [the] 2012 debate?"

That was back when Trump was ending his flirtation with a White House bid, the better to do his part to save the American economy by continuing to host "The Apprentice" on NBC.

It was supposed to be something of a political obituary for Trump. But the attention only encouraged him to try harder.

He is also given legitimacy by his relationship with Mitt Romney, whom he endorsed on Feb. 3, and by Fox, which covers him earnestly. Granted, it is a  particularly limited kind of legitimacy, among a segment of people inclined to give a hearing to anyone who wishes Barack Obama ill, but it is currency nonetheless.

They all get something out of it, too. Trump doesn't have to be Michael Jordan or LeBron James for a coach like Roger Ailes to see the value in putting him on the court and letting him play like Rasheed Wallace.

So "Fox and Friends," where Trump appears regularly by phone Monday mornings, no longer asks him about the investigators he said he sent to Hawaii to prove Obama was not born in America. His allegations that Obama -- a Harvard Law graduate and constitutional law professor -- was a below-average student have been aired on that network, with little demand for evidence.

The Daily Mail reported that Trump will reveal divorce papers Michelle Obama once prepared. (That's just one of the possible "bombshell" revelations people have speculated Trump has up his sleeve.) Dan Amira at New York magazine's Daily Intel wondered aloud why that would matter -- especially coming from Trump, who is on his third wife.

Glenn Beck's site, the Blaze, played the divorce papers story big, and took it further: "What information may actually be included in the divorce papers that may or may not exist, such as reason for divorce, is a mystery." It's a mystery that can captivate the conspiracy theorists and live on forever. (Maybe until someone releases the long-form version?)

Even on the left, MSNBC and Huffington Post generate more engagement by treating Trump as a legitimate purveyor of Republican and conservative opposition than they would if they simply pointed and laughed. For them, he's a godsend -- like another Sarah Palin.

Trump, presumably, wouldn't want it any other way.

In response to being the butt of a few jokes at the Alfred E. Smith dinner, Mayor Michael Bloomberg told the Times what could have just as easily been said by Trump after being laughed out of the White House Correspondents Dinner: "They’ll kid me and they’ll kid you, and if they don’t mention your name, that’s worse."

Azi Paybarah is a staff writer with Capital New York.