Losing the war on poppies

If Afghanistan's market is booming now, what happens when the U.S. withdraws in 2014? 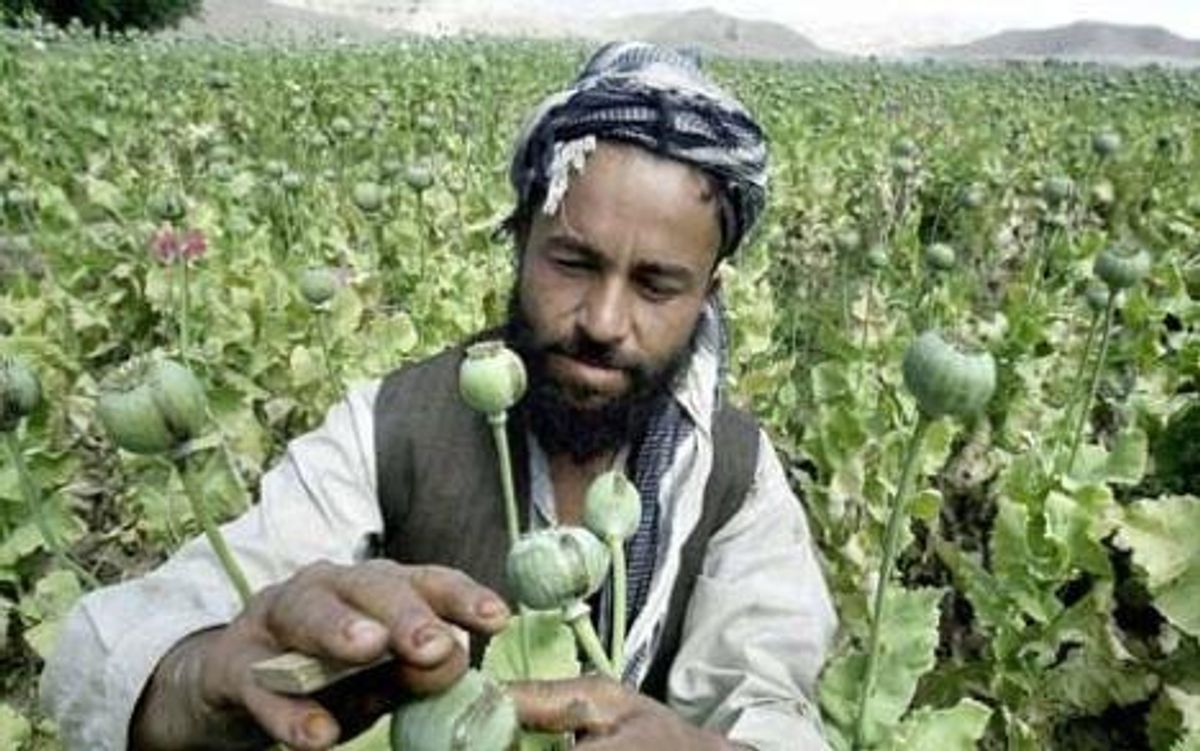 Beneath the long war in Afghanistan there is another, darker war: a narco-war against the world’s most productive opium business. Neither war is going well for the United States: in advance of the announced 2014 drawdown of our troops, the only partly governed land seems to be heading inexorably toward civil war, even as the Afghan military turns against NATO troops and as the US all but abandons hope of a peace deal with Taliban insurgents.

One reason that the Taliban has proved so resilient is a steady stream of funding from opium and processed heroin. Despite NATO efforts to subsidize other crops, opium remains, as ever, the most profitable crop for Afghan farmers, and the nation continues to produce over 90% of global product. A portion of the profits from the drug economy are passed to the Taliban, which in turn protects the opium farmers and shields drug traffickers. The profits also foster a vast network of unofficial, local power structures that make it more difficult for the Karzai government's central authority to exert control over the countryside while fueling corruption among government officials—everyone from police chiefs to governors demands a cut.

Poppy eradication became a “scam,” in the words of Justin Mankin, a former intelligence officer posted to Afghanistan and an anti-corruption advisor to NATO’s International Security Force. “Thousands of similar scams spread through Afghan officialdom. Political expediency, state weakness, opportunity, and an environment of uncertainty have promoted a race to the bottom in Afghan accountability,” he wrote in a 2010 Foreign Policy piece.

Mangin argues that without an effective anti-corruption strategy, all counter-narcotics efforts are doomed to fail. In 2009, the international coalition initiated measures to stem corruption, but too little, too late, according to Mangin. This is why the late Richard Holbrooke, the former US Special Envoy for Afghanistan and Pakistan, called US counter-narcotics efforts “the most wasteful and ineffective program I have seen in 40 years in and out of government."

There are other Catch-22s in battling illicit drug production and trafficking. In a 2010 report from the New York University Center on International Cooperation, co-author Jonathan Caulkins, a professor of public policy at Carnegie Mellon University, argued that increased counter-narcotics efforts, even if “successful,” would only drive up opium prices, which would in turn empower the nation's drug-trade profiteers: the Taliban, the warlords and government officials.

Indeed, the opium business is likely to continue to flourish regardless of the political circumstances in the country. As it has been largely untouched by the NATO war effort, it will almost certainly keep thriving after the US troop departure in 2014. The only constraints on the industry are global demand and climate variations, and the likelihood of an improvement in these factors is miniscule. (The heroin is exported to markets in Europe and Asia; almost none makes it to the US, according to Caulkins.) In fact, short of an equally improbable transformation of Afghanistan into a secure, unified, middle-class society—or the emergence of a lower-cost poppy-producing nation—many experts agree with Caulkins that a counter-narcotics strategy is a no-win.

A common criticism of the US invasion of Afghanistan in 2001 was that it disrupted the ban on opium production that the Taliban had enforced, allowing the opium economy to thrive. When NATO invaded, the ban had been in effect for less than a year; prior to that, opium had thrived under the Taliban for over a decade. So why did they enforce a ban in 2001?

Experts like Caulkins trace the one-year ban not to any political causes but to the particular economics of Afghani society. Caulkins told The Fix, “Many people who live in Afghanistan to this day maintain their savings in the form of opium.” In the absence of a stable banking system, economic security comes in the form of opium—not only for farmers with their individual stashes, but with the larger quantities in the possession of more powerful local actors, such as tribal elders known as Khans. “Because in the late ‘90s production seems to have been exceeding global demand, somebody accumulated bigger inventories, causing the price to drop," Caulkins said. “The hypothesis is that the people who had those inventories of opium that were losing value said, ‘You know what? Let’s knock out production for a year and stop the price decline.’” If true, this scenario suggests that while they were in power, the Taliban was associated with opium growers.

The two US administrations that have presided over the war in Afghanistan have been all too aware that reducing, if not eliminating, the drug trade is critical to the success of the entire trillion-dollar military enterprise. “Drugs are not the only priority issue for Afghanistan,” William Brownfield, the State Department’s assistant secretary for international narcotics and law enforcement, told The New York Times in May. “But by the same token, if you do not address the drug issue you will not succeed in the other security, democracy, and prosperity objectives you are aiming for.”

Various counter-narcotics strategies have been attempted. The Bush administration halfheartedly pursued opium crop eradication in the manner employed in Columbia against coca plants; local administrations in northern and eastern Afghanistan, which were more accessible to the nation’s centralized authority in Kabul, were ostensibly encouraged to help their farmers transition to other cash crops to replace poppies. However, given that these crops were nowhere near as lucrative, there were widespread reports that the eradication efforts enraged farmers. Rather than resulting in any notable decrease, production slowly rose, as usual, to meet global demand. Yet the crop-swap strategy did have an unintended negative consequence: production shifted to southern and southwestern Afghanistan, where most of the fighting goes on. The major opium fields remain there today, with the result that opium profits are closer to Taliban centers of power—and more accessible to their extortion or fundraising efforts.

In response, the Obama administration has shifted focus away from crop eradication to the high-level drug enforcement that has been its hallmark in other regions of the world like Latin America. Squads of DEA agents, called FAST teams, were dispatched to train the Afghan military in counter-narcotics tactics. Initially, these agents were responsible for some high-profile seizures of large quantities of heroin.

This was likely because the big players had been operating without fear of prosecution, their power and capital having made them politically untouchable. “It’s a little like showing up in the woods with a lot of animals who have never seen a human before, and you have a good rifle, you have really good hunting initially,” Caulkins said. “But whether or not that even temporarily caused a hiccup in exports is less clear.”

Yet at the same time, the US has continued to finance the Afghan government’s own crop-eradication efforts, which tend to target specific officials’ personal, tribal, ethnic or regional enemies rather than follow a more rational and equitable strategy. These measures only further alienate farmers, often driving them into the arms of the Taliban.

Opium production may be centered in the nation’s south, but northern officials still benefit from the opium economy. They are often responsible for moving the product out of the country and, in some cases, for refining it into heroin. “The former deputy interior minister for counter-narcotics used his position to strengthen the web of the criminal protection enterprise, enshrining safe passage for many Afghan officials' drug trafficking, if not into law, then certainly in regulatory practice,” Mankin wrote.

The difference between the two regions is that in the north, officials must maintain a relationship with the Karzai government, which means that at least their involvement in the drug trade must remain covert. There’s an interest in maintaining plausible deniability. Yet the bribes paid to local police are extremely high. It has been reported that one northern district police commander took home $400,000 a month from heroin smuggling.

The south, by contrast, is still under the loose control of a network of local khans and is governed mostly through kinship ties. The opium economy strengthens this informal tribal system, preventing the Karzai government and NATO from gaining control beyond temporary military victories. However, this does not mean that all opium in Afghanistan funds the Taliban—far from it. Analysts like Mankin estimate that there are probably about 20 huge players in the opium trade in southern Afghanistan. Each is likely to operate as a power broker, and may make payments to the Taliban out of political expediency or for protection, rather than out of any ideological commitment.

As the production of heroin expands, so does the local use of it. Afghanistan faces a public health epidemic of heroin addiction that goes almost entirely untreated. In 2010, there were 900,000 drug users in Afghanistan, or 7% of the population. From 12% to 41% of the police force tests positive for a narcotic.

Meanwhile, US troops in Afghanistan are falling prey to opiates as well. In 2010 and 2011, eight soldiers died of opiate overdoses while deployed in Afghanistan. Positive drug tests for opium throughout the military increased tenfold from 2002 to 2010. Military observers fear that in addition to the epidemic of PTSD, traumatic brain injury and alcoholism, the new generation of vets will have to deal with drug abuse—and, in some cases, drug dealing. General Barry McCaffrey, the former US Drug Czar, said in a speech to drug treatment providers, “I'd be astonished if we don't see soldiers who find 10 kilograms of heroin and pack it up in a birthday cake and send it home to their mother with a note that says, 'Don't open this package until I'm home.’”

The Afghan people are preparing for 2014 when America removes itself from the equation. Any further enforcement efforts by the US over the next year or so will only increase the price and empower producers. At the same time, with the departure of the Western military forces—and the civilian-aid programs—the billions of dollars that flowed into the Afghan economy will dry up, leaving opium and heroin the nation’s only essential resource. The most likely scenario is that the narcotics business will support a thriving illicit economy, attracting other illicit trade such as human trafficking and weapons smuggling.

The only feasible future in which Afghan opium production decreases is that the Taliban retake authoritarian control over the country and enforce a new opium ban—which they would do only if it were in their own economic interest.

After 11 years, a trillion dollars, and untold deaths and destruction, we will leave Afghanistan to its fate, as the country prepares itself for what many observers believe will be a civil war. What will happen after that is anyone’s guess. In a country that has been in chaos for generations, one thing is certain: the countryside will bloom with red and pink poppies and the opium and heroin will flow. What is urgently needed now is expanded drug treatment both in Afghanistan, where addiction is the only way to dull a traumatic and unstable life, and in Europe, where the demand for the drug makes Afghan poppy production an economic inevitability. This is not to say that the US invasion and occupation has not changed Afghanistan. Ironically, it may have removed the only political regime that had the power to control or ban opium production in Afghanistan.