Remembering the King of Cambodia

Norodom Sihanouk died nine days ago. My bizarre conversation with him 33 years before stays with me still 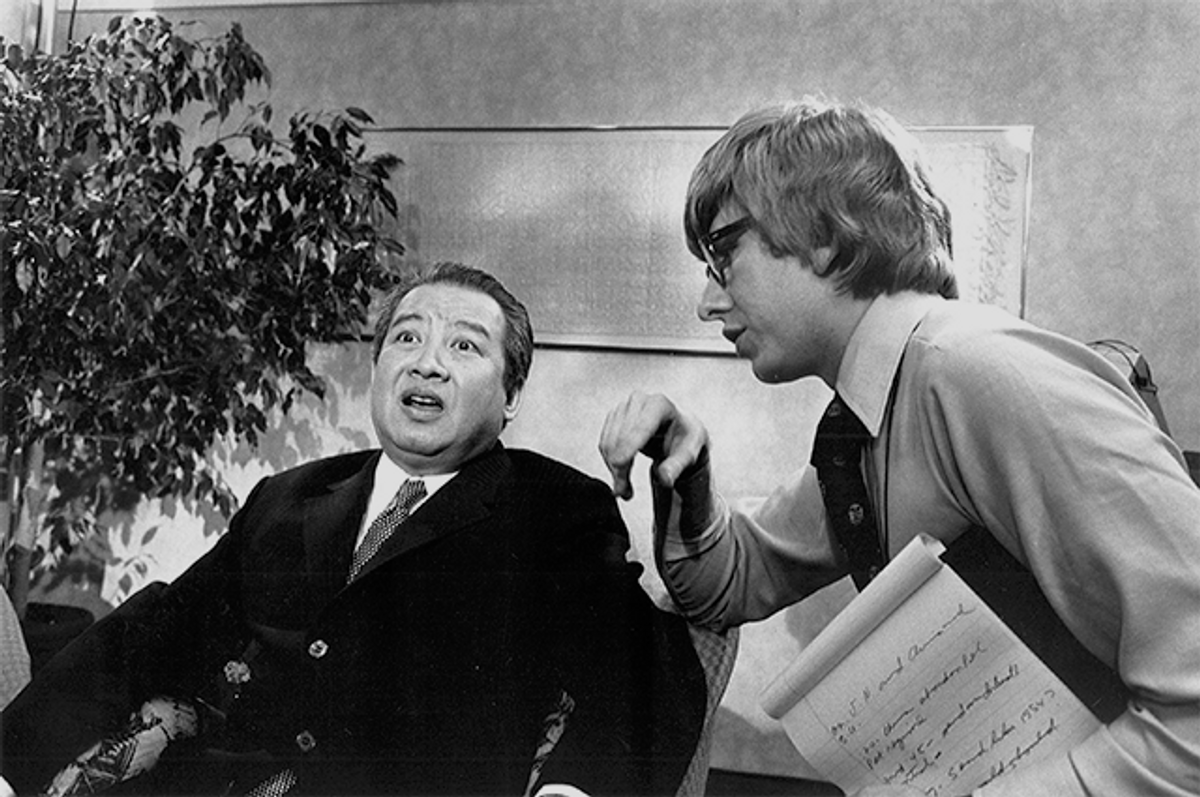 On a Monday morning in January 1979, my boss Jerry Toobin, the news and public affairs director at WNET, New York City’s public TV station (and father of journalist Jeff Toobin), walked into our work area and said to me and my fellow cubicle mates, “Bill Moyers would like to talk with Prince Sihanouk. Anybody got an idea how to find him?”

Norodom Sihanouk of Cambodia, who just died on October 15, age 89, was in the United States to speak at the United Nations. After years of house arrest, he had fled Cambodia ahead of invading Vietnamese troops and was on his way to the UN to protest the invasion on behalf of the infamous Khmer Rouge, Cambodia’s ruling regime.

Interest was high — it was less than four years since America had left neighboring Vietnam and Cambodian dictator Pol Pot had begun the genocide that murdered 1.7 million of that country’s people (the brutality vividly depicted in the movie, “The Killing Fields”).

Pondering Bill and Jerry’s request, I had one idea. On a remote chance, I called a friend of mine whose husband was a Washington journalist who had been a reporter in Southeast Asia. In 1970, he was held captive by guerillas in Cambodia for more than a month, just days after President Nixon announced he was sending troops into Cambodia (triggering the protests back home that led to the killing of college kids at Kent State in Ohio and Jackson State in Mississippi) and a few weeks after Sihanouk had been overthrown as Cambodia’s head of state.

My friend answered the phone. “This is going to sound crazy,” I said, “but do you know how to reach Prince Sihanouk?”

She replied, “He’s coming over for dinner tomorrow night.”

After a stunned pause, I said, “Would you please tell him that Bill Moyers would like to talk with him?”

She agreed to convey the message and a couple of days later, I received a phone call from a member of Sihanouk’s entourage as they stopped at a roadside fried chicken joint, driving from DC to New York. We made the arrangements and the interview was on.

It was my first bizarre contact with the strange, pragmatic, colorful and convoluted life of Sihanouk, who had been crowned King of Cambodia at the age of 18 in 1941, then abdicated to become a prince in 1955, only to be named king once again in 1993 (he would abdicate one more time, in 2004, although he then took the title “king-father,” a sort of crowned head emeritus).

During all those years, Sihanouk alternately sided with the French, the Japanese (toward the end of World War II), then the French again, the Chinese, the United States, North Korea, and Pol Pot’s “hyper-communist” Khmer Rouge. He even wound up repudiating the Khmer Rouge and backing the Vietnamese whose invasion — which ended Pol Pot’s genocide — he had come to the UN to denounce.

He was, as Mark McDonald described him in the International Herald Tribune, “a libertine and a francophile, a filmmaker and a painter, a serial husband and father and philanderer, a cherubic but ruthless god-king who liked to putter about in the garden. He played the sax in his own jazz band. He loved to eat. He once served Champagne to a visiting U.S. secretary of state. At 10 a.m.

“Most of all, of course, King Norodom Sihanouk of Cambodia was the consummate political flip-flopper, a shape-shifting monarch and realpolitik chameleon who helped to lead the global nonaligned movement but also, at one time or another, tethered his nation to the world’s major powers to preserve its independence.”

Preserve its independence – and not coincidentally – his own neck. The Washington Post noted in its obituary that “his impulse to settle personal scores nearly ruined his country and made him complicit in the Khmer Rouge holocaust,” and quoted Cambodia observer Bruce Sharp:

“…Sihanouk had one critical flaw: as much as he loved the Cambodian people, he loved himself just slightly more. At a pivotal moment in Cambodian history, he chose his own interests above those of Cambodia, and millions of people paid with their lives.”

As a journalist, Bill Moyers naturally was fascinated by Sihanouk’s life story and the tragedy of Cambodia. Once a date was set, the production team went to the hotel where Sihanouk was staying, selected a room for the interview and met with State Department security. While they were conducting an initial sweep of the interview site, I found myself alone in his suite with Sihanouk and his wife, Princess Monique. She didn’t say a word and Sihanouk and I sat stiffly and made awkward conversation in his less-than-perfect English and my less-than-perfect, schoolboy French. I remember we talked about movies, and then somehow segued into a discussion of poetry. It was all very odd.

The next day, Bill taped his interview. He did a great job and the conversation went well but it was difficult — Sihanouk was eager to air his grievances against one and all, and the Byzantine nature of Cambodian, Vietnamese and Chinese politics, the names of various factions and their leaders tumbling from his lips, were hard for an American audience to fully comprehend.

I’m not sure if video or transcripts still exist from that day more than 33 years ago, but I have the photo accompanying this piece, which was taken while I spoke with Sihanouk during a tape change. Look closely and you can read the notes on my legal pad — if you can decipher my scrawl. And I’m not sure what I was saying to the prince, but he looks startled.

And I still have the scrap of paper on which that day in the hotel suite Sihanouk carefully had written for me the name of his favorite French poet: “Alfred de Musset.”

Underneath, he added in a precise, elegant hand, “XIX ieme siècle” — “19th century.” He asked if I had ever heard of de Musset; I hadn’t. I must read him, Sihanouk insisted, and I did.

Among his many poems, plays and novels, De Musset wrote “The Confession of a Child of the Century.” Given Sihanouk’s own chaotic and controversial life, over a span of almost nine decades, it could have been the title of his own autobiography.