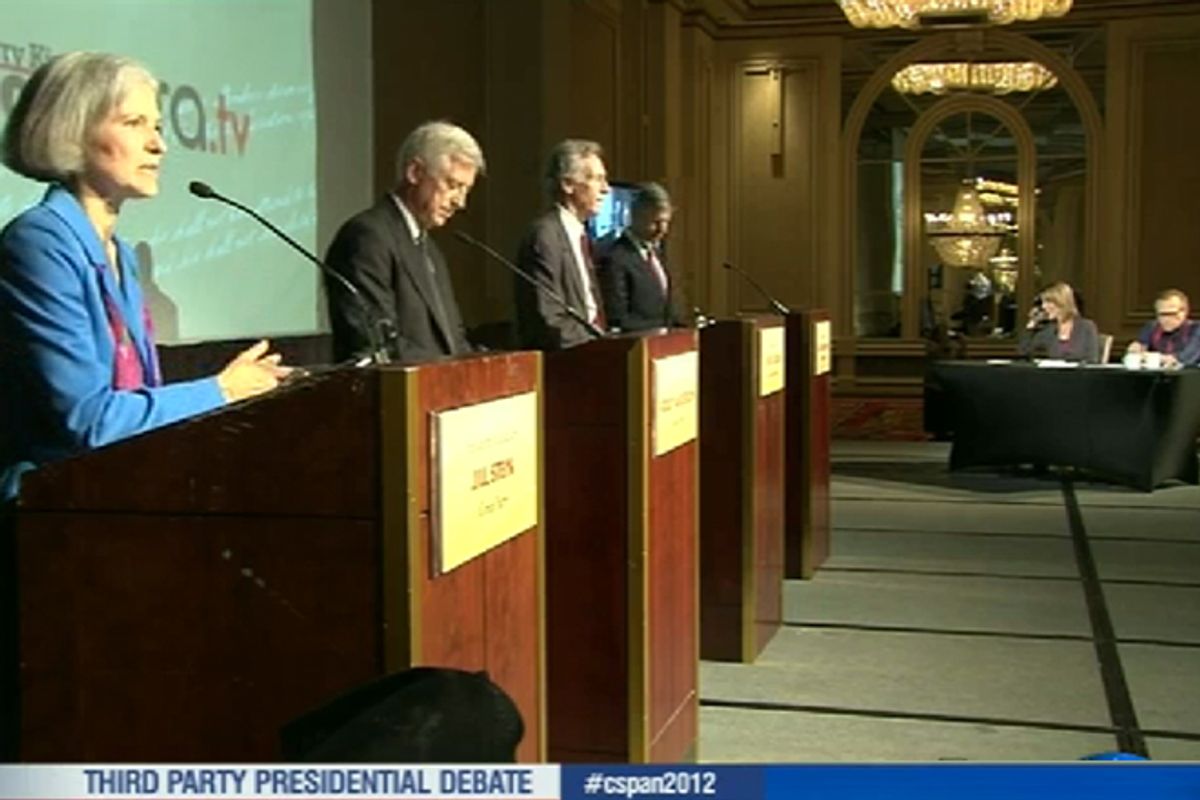 It was the first presidential debate in which the moderator was more famous than any of the candidates. Larry King, who in his post-basic cable life hosts a talk show on Ora.tv, had just flown into Chicago from Montreal, and was strapping himself into his red suspenders in the green room above the Hilton Hotel’s Continental Room. In a few minutes, he’d be feeding questions to the standard bearers of America’s third, fourth, fifth and sixth parties. Not even the event’s organizers seemed certain who they were.

“Is that Rocky Anderson?” asked a publicist for Free & Equal, the debate sponsor, pointing at a white-haired man in a baggy blue suit who looked sort of like the senator from The Godfather, Part II.

It was indeed Anderson, the former mayor of Salt Lake City, and now the candidate of the Justice Party. And that was Gary Johnson, two-term Republican governor of New Mexico turned Libertarian, autographing copies of his book, Seven Principles of Good Government. Jill Stein, the Green Party candidate in an electric-blue pantsuit, and former Rep. Virgil Goode, who became colorful only when he opened his mouth and spoke in a rich Tidewater accent retrieved from antebellum Virginia, were also circulating around the room.

This is not going to be a third party year, King admitted. Not like 1980, when John Anderson was the candidate for moderates who couldn’t bring themselves to vote for Ronald Reagan. Or 1992, when Ross Perot -- who declared his candidacy on Larry King Live -- bought a 30-minute TV special to lecture both parties about deficit spending. Or 2000, when Ralph Nader lured enough liberals to cost Al Gore Florida.

“The only way you create a third party in this country as it stands now is a dynamic person, a Ross Perot, who comes by when you’ve got a weakened president,” King said. “Bush was a weakened president. No new taxes. He had new taxes. Clinton had a scandal. Here comes a rich guy, with no ax to grind. He don’t need the money, he don’t need the job, and he becomes kind of a crusader. If Perot stayed in, he might have won.”

Nonetheless, King said, “I believe they deserve a voice. Are they going to win? No. Do they have points to make? Yes. If you’re an undecided voter, someone makes a point that makes you decide to vote for Obama or Romney.”

Diminishing the candidates further, even the venue had major party juju. Barack Obama held his first press conference as president-elect in the International Room. And the Hilton was originally the Stevens Hotel, built by the family of Supreme Court Justice John Paul Stevens, a Republican nominee.

The first question was about Top Two voting, a non-partisan primary system in which the two leading vote-getters advance to the general election. It’s popular with election reformers, like the debate’s sponsor, but loathed by minor party candidates, because it keeps them off ballots. So the candidates ignored it, and used the two minutes to pitch their renegade credentials.

“I ran completely outside the political system, completely,” Johnson said. “I’ve always been pro-choice regarding everything. The debates this year have been two candidates talking about who’s going to spend more money on Medicare, when it’s a system you pay $30,000 into, and get $100,000 out. It’s unsustainable.”

Stein and her running mate were arrested outside the town hall debate at Hofstra University, for insisting on joining Barack Obama and Mitt Romney inside.

“We were tightly bound with restraints and bound to chairs for eight hours for demanding more open debates,” she said.

Anderson called the “corrupting” influence of money “the root of all political evils. It’s why you don’t have health care for all, like all other industrialized countries. It’s why we have this bloated, wasteful military.”

Goode, who has been a “Republican, Democrat, independent, but always conservative,” promised to submit a balanced budget -- Obama’s is $1 trillion in the red and Paul Ryan’s is $600 billion -- as well as impose term limits on politicians, and suspend issuing Green Cards until unemployment drops below five percent.

Johnson promoted the most fundamentally regressive proposal of the evening -- replacing the income tax and the corporate tax with a consumption, or “fair” tax. But only Goode was booed, when his Southern conservatism rankled the liberal Chicagoans in the ballroom.

The other candidates were splenetically opposed to drug prohibition.

“I’ve smoked marijuana and I’ve drunk alcohol,” Johnson related, not as a confession, but a cool point. “I don’t do either anymore. In no category is marijuana more dangerous than alcohol. The drug problem is prohibition related, not use related. Fifty percent of kids graduating high school have smoked marijuana. That’s an issue that belongs with families, not the criminal justice system.”

Stein agreed, saying “the most serious health impact from marijuana is the illegal drug trade,” and Anderson promised to pardon federal drug offenders who haven’t been convicted of an accompanying crime.

In Monday night’s foreign policy debate, Obama and Romney both swore it is necessity for the United States to project force in the Middle East, differing only in the degree, and in the martial beat of our rhetoric. Obama disappointed doves by ordering drone strikes. Doves might be happier with Johnson, who condemned drones for taking out “a lot of innocent civilians.” Or Stein, who said “a foreign policy based on wars for oil is making us more secure, not less secure.” Or Anderson, who promised “no wars of aggression” and said the invasion of Iraq was “against the Nuremburg principle.” Or Goode, who would not send troops to Syria, or keep them in Afghanistan, “unless Congress declares war.”

There are two ways to think of minor parties. If you’re a Democrat who still blames Ralph Nader for putting George W. Bush in the White House, they're spoilers. Saying we have only two choices in a presidential election is like saying only two teams can win the World Series. Only two teams can play in the World Series, but every team in the majors can compete for a spot. Johnson, Stein, Anderson and Goode should have run in a major-party primary. Now, they’re like the Houston Astros demanding to take the field against the Tigers and the Giants.

The other way is the old joke about the stick-up man who pulls a gun and asks, “Democrat or Republican?”

“Shoot me!” his victim responds.

In a polarized nation in which partisanship has become so woven into personal identity that there are separate dating sites for Republicans and Democrats, it’s nice to have political choices that don’t automatically antagonize half one’s fellow citizens.

The third-party debate was televised on C-SPAN, and viewers are invited to vote for their favorite candidate at this site. Polls close Wednesday evening. The top two finishers -- chosen by proportional representation, of course -- will advance to a foreign policy debate next Tuesday in Washington.

The organizers are hoping Phil Donahue will moderate.