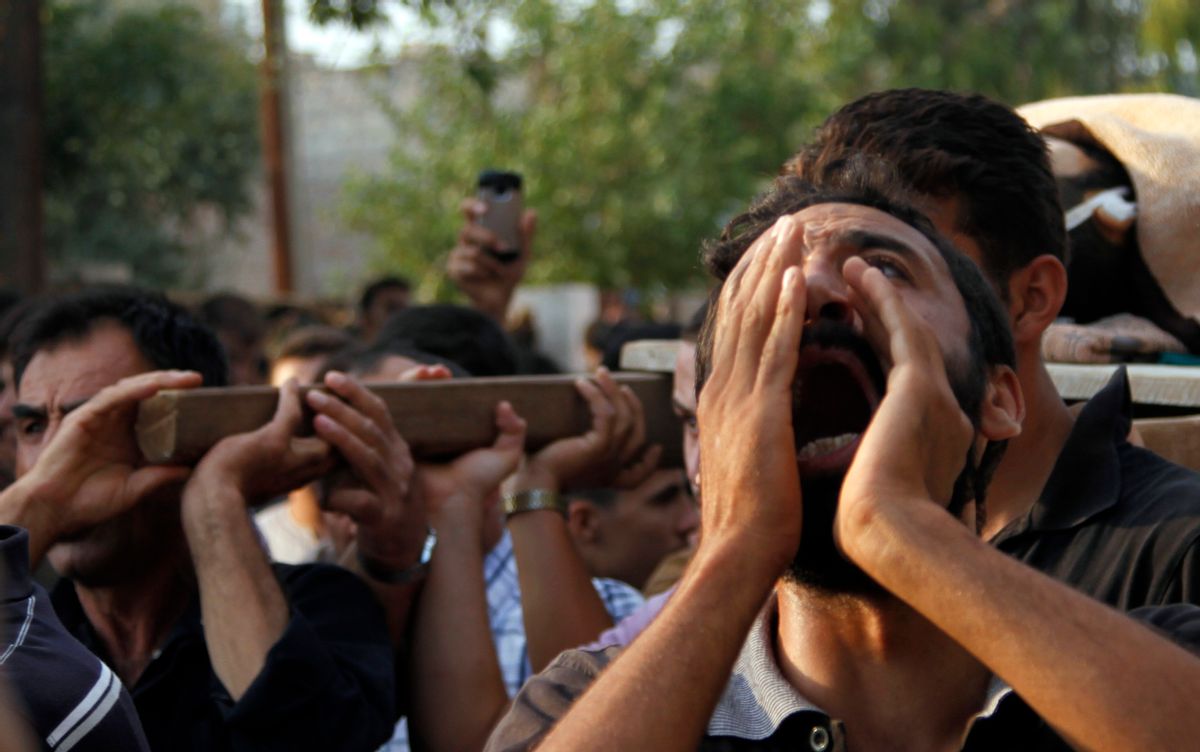 A Syrian man chants slogans during the funeral of 29 year-old Free Syrian Army fighter, Husain Al-Ali, who was killed during clashes in Aleppo, in the town of Marea on the outskirts of Aleppo city, Syria. (AP/ Khalil Hamra)
--

CAIRO, Egypt — In March 2011, a group of young students in the southern Syrian city of Daraa brazenly painted rare anti-government graffiti on the walls of their school. Few could have imagined that 19 months later, Syria would be in the throes of a violent, anti-regime uprising that every day looks more and more like a regional proxy war.

As the civilian casualties mount and refugees flood neighboring countries — and more state and non-state actors enter the fray — the Syrian conflict is widening in a way that threatens to engulf the entire region.

Turkey is perhaps the nation closest to directly clashing with Syria. Sharing a 560-mile border with Syria, the NATO-member nation now hosts more than 100,000 refugees and has actively assisted the Syrian opposition.

“I’ve been told by the Turks that they’ve played a role in terms of providing aid and money and even arms” to the Syrian rebels, said Michael Hanna, a fellow at the New York-based Century Foundation.

Lately, Turkey has also engaged in cross-border shelling with the Syrian army after an errant Syrian strike killed five Turkish civilians earlier this month. Turkish parliament subsequently authorized the deployment of Turkish troops beyond its borders, while banning all Syrian aircraft from entering Turkish airspace. Turkish officials accused the regime of using civilian flights as cover for the transport of military goods.

Turkish Prime Minister Recep Tayyip Erdogan recently lashed out at the United Nations for its inaction in Syria, saying world powers are repeating the mistakes they made in Bosnia in the 1990s, though Turkey has not yet requested formal help from the NATO alliance.

“While Turkey doesn’t want war, it is close to war,” Erdogan said.

Turkey has suggested it maintains the right to intervene in Syria should it face increased attacks from Kurdish militants based there. The Kurdistan Workers Party (PKK), which is based in Turkey and is fighting for Kurdish separation, has boosted assaults on Turkish forces in recent months.

Still, domestic support for war with Syria remains low. Turks have grown resentful of the strain Syrian refugees are putting on resources and the economy.

This small desert kingdom shares a 233-mile border with Syria, and now hosts more than 100,000 refugees who live in a vast, dust-swept city of tents, with poor conditions.

Increased use of airpower by the Syrian regime has bolstered the flow of refugees into Jordan, putting further stress on the country’s already meager water and energy reserves.

According to a recent poll by the Center for Strategic Studies at the University of Jordan, 80 percent of Jordanians say the Syrian refugees are a burden on the country. Another 65 percent said they are opposed to allowing any more Syrian refugees to enter.

Syrian refugees, in fact, have clashed with Jordanian security forces in the refugee camps. Jordanian Salafi Islamists have also been caught crossing the border into Syria to fight with the largely Sunni opposition against the Syrian regime, which is drawn primarily from the Shiite sect known as the Alawites.

On Tuesday, a Jordanian soldier was killed after clashing with an “armed group” at the border, reports said. Analysts say Jordanian officials are concerned that Syrian President Bashar al-Assad could lash out if he thinks Jordan is allowing fighters to slip across its border. Any clash with Syria could further destabilize Jordan, which is already mired in a political stalemate and is facing growing calls for government reform.

“It seems as if more Jordanians are adopting a ‘don't rock the boat’ approach to domestic politics and the political reform process,” said Naseem Tarawnah, a Jordanian blogger, in an email. “No Jordanian wants to see that [Syrian] conflict duplicated in the kingdom.”

Earlier this week, Jordanian officials said they foiled a terror plot to bomb shopping malls and assassinate diplomats in the Jordanian capital, Amman. The suspects were said to have smuggled explosives and ammunition

Lebanon, the tiny Mediterranean country that has historically lived in Syria’s shadow, perhaps has the most to lose in the Syrian conflict.

Lebanon’s fractious sectarian populace also threatens to violently disintegrate as the Syria conflict — itself now a sectarian fight — rages on.

“Lebanon is deeply factionalized and divided by religion and by tribe,” said Naji Malaeb, a former brigadier in the Lebanese army. “The Syrian regime is part of an axis led by Iran, which supports Shia in Lebanon and has been supporting Hezbollah.”

Hezbollah, a powerful Shiite political and military organization based in Lebanon, has supported the Assad regime while Sunni groups in Lebanon have themselves assisted Syrian rebels. Those rebels are using northern Lebanon as a logistics and operations hub. Sporadic clashes between pro- and anti-Assad gunmen have broken out across Lebanon in recent months.

The Lebanese government is under pressure from certain sectors of the population to take a more pro-active stance against Syria, which ended a years-long occupation of Lebanon in 2005.

“Extreme Sunni forces that support a direct military confrontation with the Syrian regime and the Shia Hezbollah party are still a minority but it is increasingly likely that they can reach critical mass,” said Ayham Kamal, an analyst with the global political risk firm, Eurasia Group. “Such an evolution in the Sunni political scene is increasing the likelihood of civil war in Lebanon.”

While not sharing borders with Syria, the Gulf nations of Saudi Arabia and Qatar have used their oil riches to take on a very active role in the conflict there.

The two Gulf countries have been at the forefront of calls for Assad to step down, actively supplying the Syrian opposition with weapons and, some critics say, contributing to an increasingly powerful strain of Al Qaeda-styled fighters among the Syrian rebels.

Weapons from the Gulf are largely credited with having reinvigorated the 2011 uprising earlier this year, but also as part of a broader move by Saudi Arabia and Qatar to stem what they say is rising Iranian influence in the Arab world.

Analysts say Saudi Arabia has long sought to break up the Syrian-Iranian alliance and install a Sunni, pro-Saudi regime in Syria. Iran is militarily backing the Assad government.

“The Gulf [states] found an opportunity [in Syria] to support local forces while keeping the Iranians off balance at worst,” Aram Nerguizian, a visiting fellow at the Center for Strategic and International Studies in Washington, DC, told GlobalPost in August. “There is a broader pattern in the Gulf that has taken on a very strong Sunni versus Shiite underlying narrative.”

Saudi Arabia may also be angling to distract from its own internal dissent. A simmering reform movement has protested corruption and other social ills.

Qatar is also utilizing its support for the Syrian uprising to raise its position as a key regional player. Qatar has called on the United Nations to assist rebels, and supports either international no-fly or buffer zones inside Syrian territory.

Iran has been perhaps the most outspoken and staunch supporter of the Assad government in Syria, which the Iranian regime views as one of the key pillars of its so-called “resistance axis,” along with Hezbollah in Lebanon, against Western influence.

If Assad falls, Iran, facing its own sanctions, will lose perhaps its last consistent ally in the international community, analysts say. The Syrian conflict has caused Iran’s relationship with Turkey to erode significantly. Iran would also be deprived of its main conduit for weapons to Hezbollah in Lebanon.

“There are no obvious answers to the question of how Iran will compensate for the loss of Syria,” Hanna said.

Iran has long supported the Assad regime, but recently boosted its aid to the embattled government by providing intelligence communications equipment and key military advice, according to reports.

Iran’s continued military and political support for Assad is likely to firm up the government’s resolve and draw out the conflict. In September, the commander of Iran’s Islamic Revolutionary Guard Corps acknowledged members of the elite Al Quds Forces were in Syria to assist and train government forces.

Iranian officials have publicly called for a political solution to the conflict, but observers say Iran could be using its military presence in Syria as a deterrent against other foreign nations considering intervention.

“As long as Iran supports the [Syrian] regime, it will attempt to preserve its interests in the same way it always has,” said Naji Malaeb, a former Lebanese army brigadier.

Syria’s Kurdish minority, a population of about 2 million, see an opportunity for more autonomy — or even statehood — in a disintegrating Syria, adding another destabilizing component to the conflict.

As an ethnic group spread across Iran, Iraq, Turkey and Syria, Kurds have long dreamed of linking Kurdish minorities to form a nation of their own. As Syrian government forces are focused on fighting a Sunni-led insurgency, Kurds have carved out a degree of autonomy in northeastern Syria.

Kurdish flags fly over government buildings, and new schools that teach the once-banned Kurdish language have opened. There has been very little fighting in Kurdish areas, though some refugees have made their way to Iraq as food and supplies dwindle.

Some worried the Kurds would back Assad as part of a deal for more rights, or that the Syrian government’s withdrawal from Kurdish areas was meant to pressure Turkey, which faces its own Kurdish insurgency.

Reports say Kurdish officials in Iraq’s semi-autonomous Kurdish region have provided refuge and arms to would-be Syrian Kurdish militias seeking to consolidate self-rule in northeastern Syria. But a Kurdish-ruled area of Syria could also be used as a base for the PKK, drawing Turkey into the conflict, analysts say.

“The current political and security environment in the region makes it very likely that Syria will become a key base for PKK military operations,” Ayham Kamal, an analyst with the global political risk firm Eurasia Group, said in August. The Kurdish militia will most likely use the security vacuum to “improve their military capacity” vis-à-vis Turkey, Kamal said.

Following the US-backed and NATO-led intervention in Libya in 2011, neither military power has expressed willingness to intervene in Syria. Earlier this month, NATO ambassadors expressed condemnation of Syria’s deadly shelling of a Turkish village, but did not invoke the alliance’s Article 5, which would commit them to come to the defense of a member state under attack.

Analysts say NATO’s members, the majority of which are European nations, are distracted by the monetary crisis now plaguing the continent. For its part, the US has intensified its intelligence and military cooperation with Turkey in vetting opposition groups, and has authorized non-lethal support for the rebels.

The administration of US President Barack Obama is under pressure from Arab allies to back Syria’s opposition, and has called for Assad to step down. Analysts say Syria also gives the US an opportunity to weaken Iran. But so far US officials have backed down from calling for military intervention.

“I think there is rightfully some hesitation injecting the US directly into something as complex and as intractable as the Syrian conflict,” Hanna said. “There’s no political will to intervene.”

According to the Pew Research Center, 64 percent of Americans said in March that the US government does not have a responsibility to do something about the fighting in Syria.