Pick of the week: The overblown, funny, romantic "Cloud Atlas"

Pick of the week: Tom Hanks and Halle Berry play multiple roles in an epic fable of life and death 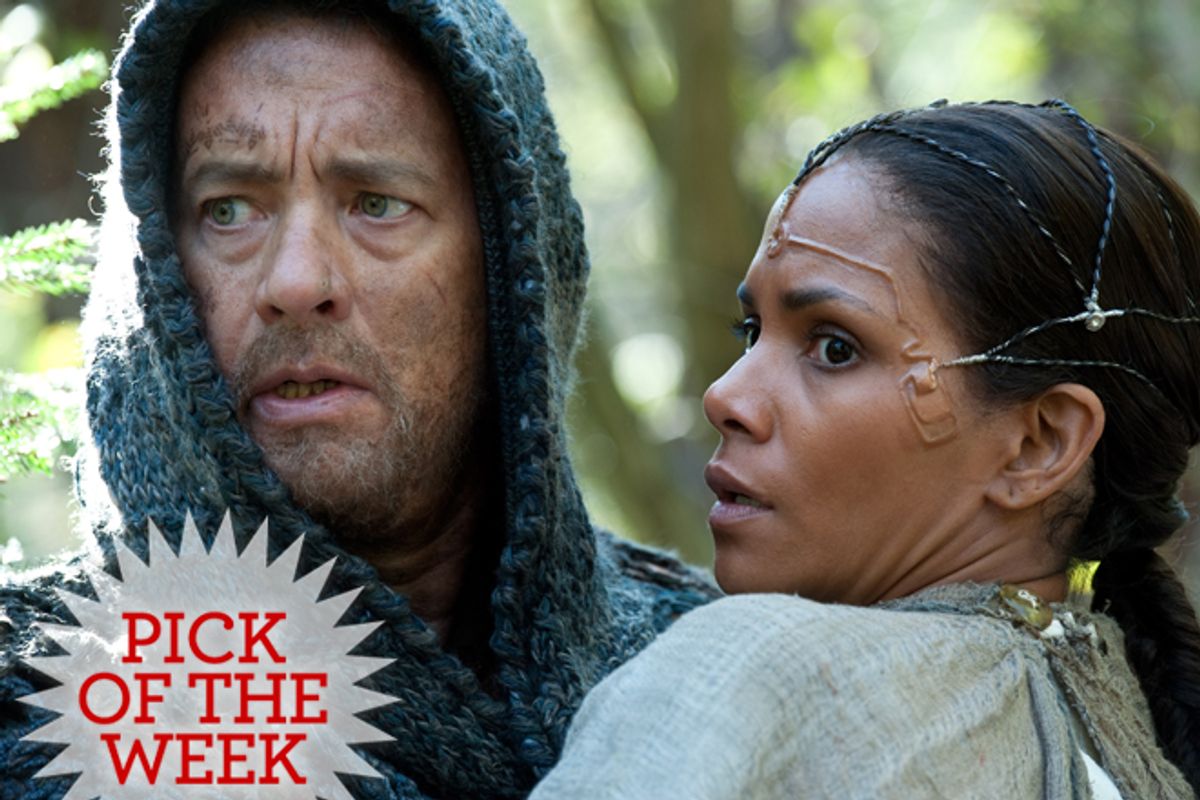 I will tell you in the same breath that “Cloud Atlas” is a flawed and potentially ridiculous work and that I loved it, and can’t wait to see it a second time (and then a third). Indeed, all of that is connected, as the movie itself reminds us — perhaps too many times.

I can appreciate a well-crafted work of Hollywood formula that gives the audience what it already knows it wants, at least up to a point, but I often come away feeling restless and unsatisfied. I’d almost always rather see the rare kind of pop spectacle that takes enormous risks, that reaches for grand themes, big ideas and operatic emotions, even if it makes indefensible mistakes along the way. That’s what “Cloud Atlas” is, the kind of oversize, overpriced movie that critic Stuart Klawans described in his book “Film Follies.” (The classic example would be D.W. Griffith’s silent epic “Intolerance,” which serves as a major model and influence here.) “Cloud Atlas” is arguably way too much of a good thing, with too many characters, too many stories, too many directors – Tom Tykwer of “Run Lola Run” and “Perfume,” and Andy and Lana Wachowski (né Larry) of the “Matrix” trilogy — and too much running time. But its too-muchness is also the source of its power; I was absolutely never bored, and felt surprised when the movie ended. It’s an amazing, baffling, thrilling and (for many, it would appear) irritating experience, and for my money the most beautiful and distinctive big-screen vision of the year.

You can experience or describe this dazzling, chronology-jumping tapestry in pieces, which risks making it seem even less coherent than it is. (I’ve already encountered several Internet comments about Susan Sarandon playing a man, which is true but completely irrelevant – that probably takes up two seconds of screen time.) Or you can try to make some intuitive sense of it as a whole. Again, the movie – and David Mitchell’s brain-teasing, best-selling novel, adapted here by Tykwer and the Wachowskis – might like to argue that we are faced with the same choice in considering many other things, such as life or human history or the universe.

Indeed, how you respond to “Cloud Atlas” will largely depend on how much you can tolerate its blend of not-quite-theistic spirituality and Manichaean and/or Marxist politics. Or to put it in concrete moviegoing terms, how you felt about “The Matrix Reloaded,” the controversial middle chapter of the Wachowski siblings’ millennial science-fiction trilogy. Because this movie is pretty much that movie dialed up to 11, with Tom Hanks and Halle Berry playing, like, 14 different characters apiece, mixed with an adaptation of John Donne’s “Holy Sonnet 10.” That’s the most famous metaphysical poem of the English tradition, the one that begins this way:

Death, be not proud, though some have called thee
Mighty and dreadful, for thou art not so ;
For those, whom thou think'st thou dost overthrow,
Die not, poor Death, nor yet canst thou kill me.

If Donne’s confidence in resurrection and eternal life seems dubious, or laughable, in our agnostic age – and one gets the sense that those who still believe in such things aren’t reading much 17th-century poetry – that gives you a sense of the impossibly high mountain that “Cloud Atlas” seeks to climb. Moving between interconnected but wildly different narratives set in 1849, 1936, 1973, 2012, the middle of the 22nd century and a distant, undated, post-apocalyptic future, “Cloud Atlas” makes a philosophical and indeed theological argument about human life. You could say it’s a truth or a truism, that it’s fundamentally scientific or essentially religious. Individual human lives can seem like irrelevant or accidental phenomena, all too easily snuffed out; but the connections between them are more varied and diverse than we can ever see, and taken all together they are like a river of meaning and information, flowing inexorably into the future.

Purely at a cinematic level, “Cloud Atlas” is full of eye-popping delights, a puzzle movie and an anthology movie that incorporates numerous different genres and styles. The directing duties were actually divided, with Tykwer tackling the romantic saga of a suicidal gay composer in 1936, a thrilling tale of “China Syndrome”-style nuclear intrigue in 1973 (arguably my favorite) and the present-day comic melodrama of a bankrupt London publisher imprisoned in a mental hospital, while the Wachowskis handled both the distant past and even more distant future. (Tykwer uses his customary cinematographer, Frank Griebe, while the Wachowski segments are shot by Hollywood vet John Toll.) But I never thought about any stylistic differences while watching, and indeed the transitions between stories – often staged as the literal or figurative opening of doors – are so witty and imaginative I frequently laughed out loud. (Hollywood will be thoroughly confused by this film in general, but I imagine it will be up for numerous technical Oscars, including editing, production design and costume design.)

Let’s admit right up top that asking Tom Hanks – whose movie-star career rests almost entirely on his comfortable ability to portray American everymen – to play a chameleonic array of characters, including a grasping 19th-century ship’s doctor, a present-day Irish gangster-turned-author, a corrupt 1930s English hotel clerk and a superstitious clansman of the neo-primitive future, seems almost like willful perversity. (And it’s only a little less true with Halle Berry, who has never seemed to possess immense dramatic range.) But that’s not a new quality for the Wachowskis, who cast radical African-American academic Cornel West in the aforementioned “Matrix Reloaded,” and whose movies have always been built around a peculiar mixture of irony and sincerity. If Hanks is, perhaps, not ideally convincing as an Irish thug, he is surprisingly good as the evil shipboard doctor who’s poisoning a young aristocratic traveler (Jim Sturgess), and the naïve but manly hero of a “Road Warrior Goes to Planet of the Apes” deep-future adventure is right in his comfort zone.

More important than that, the recurring presence of so many actors in different roles throughout the film – Hanks and Berry first and foremost, but also Sturgess, Jim Broadbent, Hugh Grant, Ben Whishaw, Korean actress Doona Bae, veteran Wachowski villain Hugo Weaving and numerous others – creates the sense of a tide or undertow that connects all these people and their stories but that’s impossible to define. I don’t think it’s supposed to be “convincing” to see Berry or Doona Bae playing 19th-century Englishwomen. Perhaps it’s supposed to remind us that personal identity, like embedded social categories such as race or gender, is something we make up as we go along. (In case you haven’t noticed, one of the directors of this film is a woman who used to be a man.)

I don’t want to get too deep into geeky exegesis in an early review, but “Cloud Atlas” isn’t about reincarnation, at least not in the most familiar sense. (Although it may, in some metaphorical way, be about evolution.) Berry and Hanks and the others don’t play the same characters by any means – in fact, only one of Hanks’s characters is unambiguously heroic – and it’s much more than your basic romantic parables about lovers who can’t be separated by death. One possible interpretation, however, would be that the same characters or archetypes (the rebel prophet, the enforcer for the powerful, the killer devoured by greed, the courier or messenger) reappear in each story, and throughout human history, in various guises.

Sometimes the connections between the stories are clear enough: Robert Frobisher (Whishaw), the brilliant but doomed young composer in prewar England, is reading the diary left behind by Adam Ewing (Sturgess), the traveler being poisoned by Hanks’s doctor almost a century earlier. When Berry’s character meets Hanks’s tribesman in the post-apocalyptic storyline, she is searching for traces of the lost technological society we’ve seen in the “Blade Runner”-style 22nd-century episode, which features an inspiring but brief slave rebellion led by a woman whose words continue to reverberate long after her civilization has been destroyed. If it’s been obvious since “The Matrix” that the Wachowskis are influenced by a Marxist-Christian dialectical view of history as an endless clash between the powerful and the downtrodden, Mitchell’s novel introduces an almost Taoist element, as if the tension between slave and master were like the fuel in that ill-fated 1973 nuclear reactor, driving civilization onward, holding it in long-term balance and finally dooming it to destruction.

I can understand why some people will back away from “Cloud Atlas” because it seems overloaded and pretentious and sentimental and infused with a spiritual vision that resembles the wise sayings found on the walls of organic-food cooperatives. It is all those things, but so (even more so) is Terrence Malick’s “Tree of Life,” and I’m way more likely to want to watch this one again. It’s funny, violent and prodigiously romantic; it has immense heart and more gorgeous cinematic moments than I can describe. If this movie is overgrown and chaotic where Donne’s sonnet is tiny and controlled, that’s the nature of our age; what they aim to accomplish is the same.