Why the "war on fat" is a scam to peddle drugs

A new study finds no evidence that losing weight is good for your health. That's bad news for Big Pharma 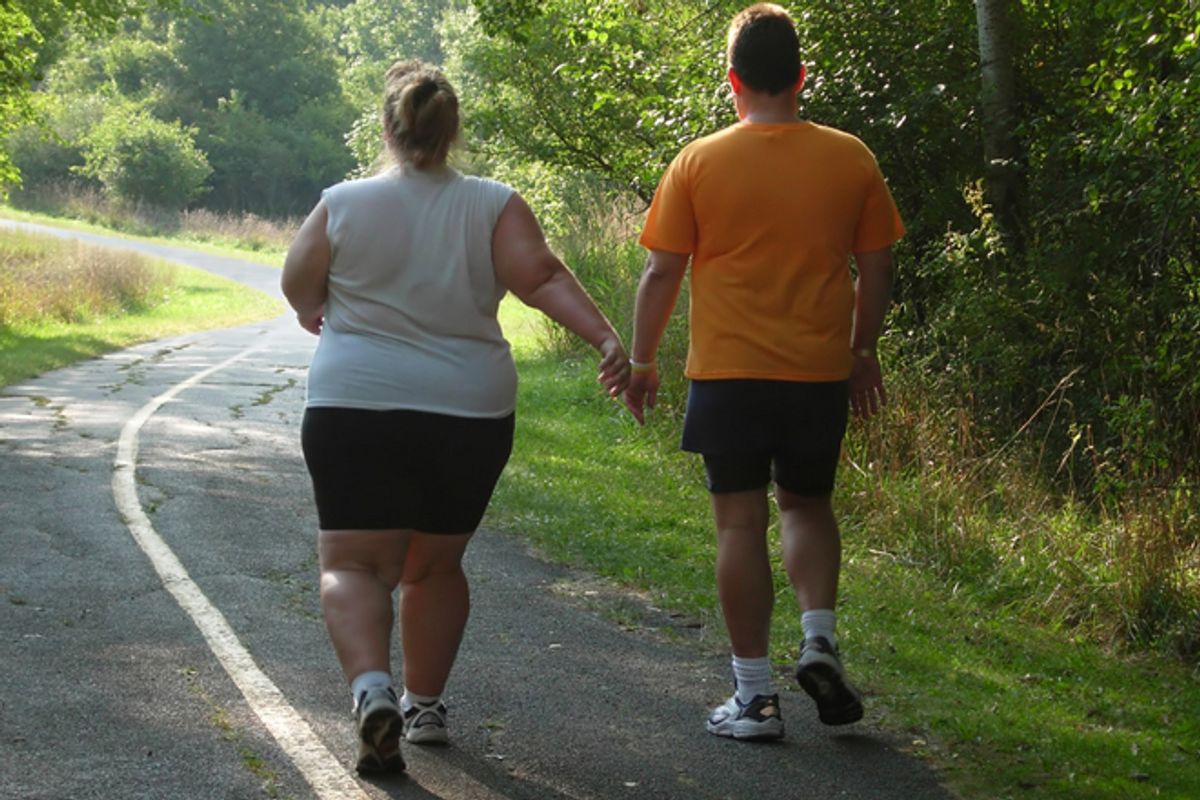 For many years now, I’ve been talking to Dr. X about weight and health.  Dr. X, who is one of the nation’s most distinguished medical researchers, is employed by the federal government, and isn’t allowed to make on-the-record comments regarding government health policy without getting those comments cleared first by Dr. X’s administrative superiors.

Dr. X  has a theory about the government’s anti-fat crusade, which is that the public health establishment has been duped by Big Pharma into becoming unknowing participants in the following money-making venture:

Step 1: Convince Americans that not being thin is a disease that needs to be cured.

Step 2: Encourage the government to implement public health programs that, through lifestyle interventions, will purportedly make people thinner, and, by hypothesis, healthier.

Step 3: Document the complete failure of these programs in the medical literature.

Step 4:  Get the government to approve a host of new diet drugs, since it’s now been demonstrated that lifestyle interventions don’t do anything to help reverse this deadly epidemic.

Dr. X’s theory that the war on fat is in large part about priming the regulatory pipeline for the next generation of weight loss drugs got a boost this weekend, when the government announced it was ending the Look AHEAD weight loss trial “early” (after 11 years), because the study’s participants were not getting the health benefits the study was supposed to produce.

The Look AHEAD trial was particularly important, because it was a sophisticated and expensive attempt to demonstrate that significant long-term weight loss improves health outcomes. It will probably come as a surprise to most readers to learn that this hypothesis remains almost completely unconfirmed by the medical literature – in part because we simply don’t know how to produce significant long-term weight loss in a statistically significant group of people, so the hypothesis has been impossible to test.

For years, critics of the war on fat have been pointing out that we don’t know how to make people thinner.  Undertaking a regimen of eating less and exercising more does not result in significant long-term weight loss for most people, and it’s not known if such weight loss, if it were maintained, would produce improved health outcomes.

Look AHEAD, which involved more than 5,000 people with diabetes, half of whom participated in an intensive, closely monitored program that limited them to 1,200-1,800 calories per day (depending on the weight of the participant) while they exercised for at least 170 minutes per week, was an attempt to test whether significant long-term weight loss would actually produce reduced risk in terms of what researchers call “hard clinical endpoints” – namely cardiovascular disease and stroke.

The results were unambiguous.  Note that, perhaps out of necessity, the study defined “significant long-term weight loss” quite modestly, since on average this intensive lifestyle intervention produced a little less than a 5 percent reduction in body mass (i.e., a 160-pound “overweight” woman in the program weighed, on average, 152 pounds after four years of participation).  In other words, what the study proved yet again is that lifestyle interventions don’t produce much, if anything, in the way of long-term weight loss.

The study was terminated, however, not for this reason – after all, it defined a 5 percent weight loss as “success” – but because after 11 years the group that had made the lifestyle changes did not exhibit any lower risk for cardiovascular disease or stroke than the control group.

Dr. X, who has watched these failed public health programs play out over many years, is understandably cynical about it all, remarking that “I imagine the results will be published in full pretty soon, once they figure out how to write it up to show that it really did work even though it looks like it didn't,” and noting with appropriate sarcasm that “this is evidence we need to redouble the intervention efforts.  Maybe Look AHEAD will be the evidence we need to show that you need to lose more weight, perhaps by taking Qsymia, the new weight-loss drug.”

When it comes to public health policy regarding weight and health, the aphorism that insanity consists of doing the same thing over and over and expecting a different result has never seemed more appropriate.