If only it made sense to vote for a third party 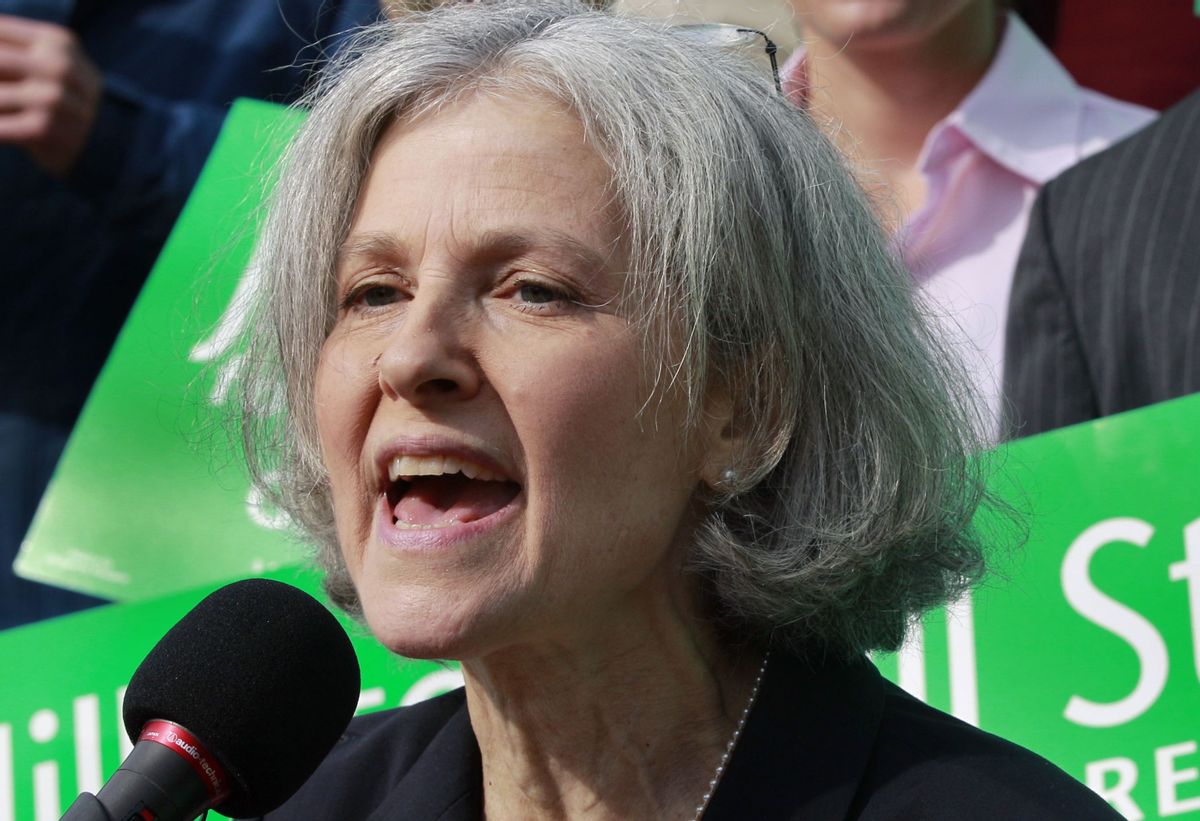 The Green Party candidate for president, whose name appears on 85 percent of the ballots across the country, was taken into custody along with her running mate Cheri Honkala outside of Hofstra University for daring to attempt to participate in the second debate — what law enforcement disingenuously termed “disorderly conduct.”

As President Obama and Governor Romney argued about women’s rights, the only female presidential candidate was in jail. The real “binders of women” were the Commission of Presidential Debates and the Hempstead, N.Y, police.

If this doesn’t disgust you, it should. Not because Jill Stein has a snowball’s chance of winning the election — even if she somehow managed to win the popular vote, the Electoral College would shut her down, as it was designed to do — but because she possesses the “fresh ideas” and “new vision for America” that both major parties accuse the other of lacking. Here, for example, is the section on Financial Reform in Stein’s “Green New Deal”:

1. Relieve the debt overhang holding back the economy by reducing homeowner and student debt burdens.

2. Democratize monetary policy to bring about public control of the money supply and credit creation.  This means we’ll nationalize the private bank-dominated Federal Reserve Banks and place them under a Monetary Authority within the Treasury Department.

3. Break up the oversized banks that are “too big to fail.”

4. End taxpayer-funded bailouts for banks, insurers, and other financial companies. We’ll use the FDIC resolution process for failed banks to reopen them as public banks where possible after failed loans and underlying assets are auctioned off.

5. Regulate all financial derivatives and require them to be traded on open exchanges.

7. Establish a 90% tax on bonuses for bailed out bankers.

8. Support the formation of federal, state, and municipal public-owned banks that function as non-profit utilities.

Those are eight bold economic proposals vastly superior to anything Obama or Romney have come up with. How would the two major-party candidates argue against the idea that in the next round of qualitative easing, instead of buying up toxic derivatives from big banks, the Fed should instead buy up student loans and unilaterally reduce the interest on them to zero? Would Obama and Romney be opposed to that? Wouldn’t you like to know? Stein’s presence in the proceedings would force the president and the governor to actually — gasp — debate policy. To try on new ideas. And both camps know it. If nothing else, Jill Stein should be moderating the debate; instead, she’s in the clink.

Think about that for a moment. If either big-party candidate requested that Stein — or her Libertarian counterpart, Gary Johnson — be included, the CPD would likely do so. They don’t, because a) it hurts both of their chances for election, and b) Obama and Romney are both beholden to special interests that have no truck with third parties: Wall Street (the charge that the president is a socialist hellbent on screwing the banks is ludicrous; please go see "Inside Job"), the health insurance lobby (it is unconscionable that we don’t have universal healthcare in this country — something both Obama and Romney personally believe but can’t do anything about), the military-industrial complex (if we remove troops from Afghanistan in 2014, it will only be to re-deploy them to Syria, or perhaps Iran), Big Oil (did you see them tripping over themselves last week to bow down before the oil companies, despite the fact that the Keystone Pipeline will pretty much destroy the environment once and for all?).

The inconvenient truth is that Obama and Romney have far more in common than most of us care to admit. Democrats and Republicans are the Coke and Pepsi of the American political system — two similar, syrupy tonics whose bogus Cola War ensures the perpetual defeat of RC Colas everywhere, blind taste tests be damned. Yes, the few differences between Barry and Mitt are crucial, especially when it comes to the selection process for new Supreme Court justices, and this fear, this Scaliaphobia, is what keeps most of us from deviating from one of the two establishment-approved options. But there’s no question in my mind that everyone in this country, even the likes of Sheldon Adelson and Donald Trump, would be better off with a President Stein than either Obama or (shudder to think, especially after last night’s pathetic showing) Romney.

Will I put my money where my mouth is and vote for her? Probably not. I’m afraid, too. I mean, I voted for Nader in 2000. (In my defense, I live in New York; I could write in Sponge Bob, and the Democrats would still take the state). What happens when you vote your conscience, we on the left have learned, is eight years of George W. Bush. Heck, even the American Communist Party is endorsing Obama.

And it’s not like Stein could ever win. As I mentioned before, even if she managed to capture the popular vote, she would not become president. That, and not to render my Empire State vote less valuable than my cousin John’s in Ohio or my friend Owen’s in Iowa, is the real purpose of the Electoral College — it’s a safeguard, to ensure that a third-party candidate will never, ever, ever occupy the Oval Office.

If that doesn’t disgust you, maybe this will: In 2008, Barack Obama won the popular vote over John McCain by 69,456,897 to 59,934,814. There were about 300 million people in the United States in 2008, with something like 225 million of voting age. That means roughly 100 million people didn’t bother to go to the polls that year. Obama took the White House, overwhelmingly, with the support of less than a quarter of the overall population. And we call ourselves, with a straight face, a democracy.

Obama will win the election two weeks from now. He’ll win by a narrower margin than last time, and fewer people will vote than in 2008, but he’ll best Romney and his horses and bayonets. We’ll have four more years of Congressional gridlock and drone strikes and slooooow economic improvement, and two more quality justices on the bench, and a president who actually understands foreign policy in the White House. But we’d all be better off with Jill.