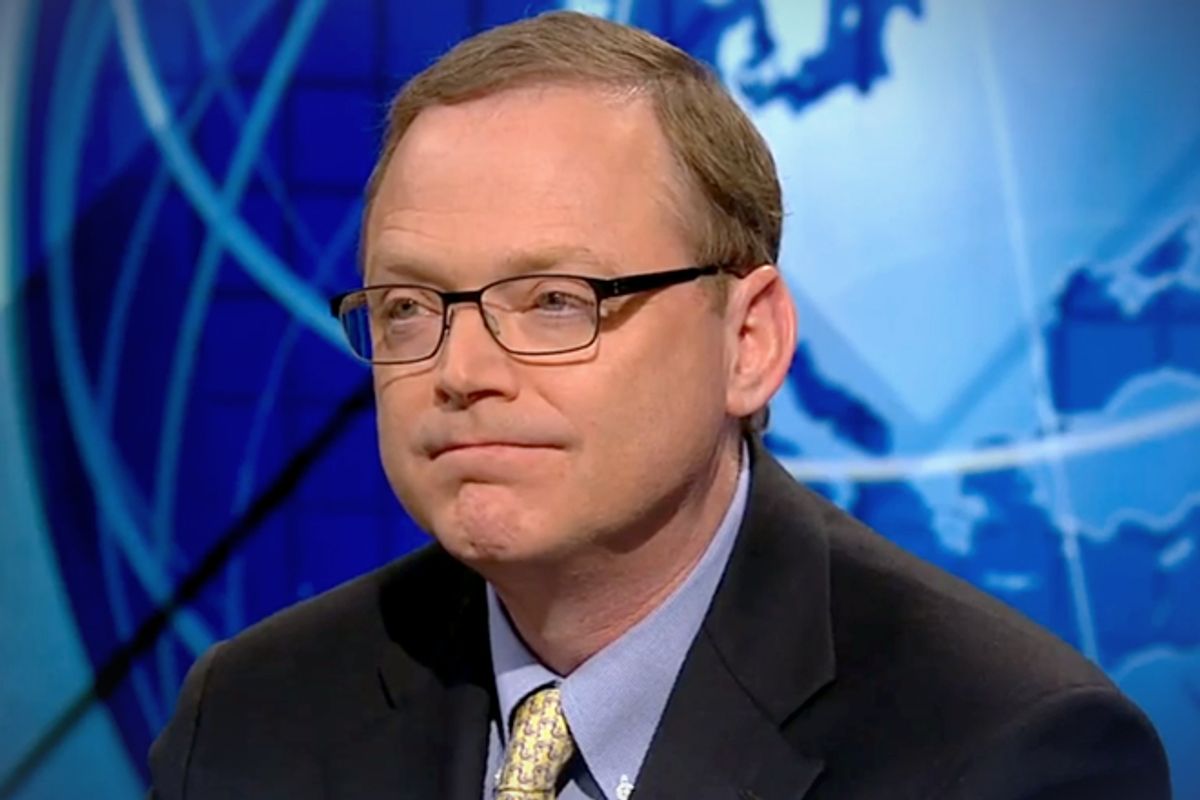 Income inequality? Don’t get worked up about it, wrote two American Enterprise Institute scholars in the Wall Street Journal this week. The gap between the rich and everybody else in the United States is not getting bigger, they argue, and those who are telling you that it is (like President Obama) are "seeking political gain by inflaming class hatreds with misleading statistics."

One of the Op-Ed's co-authors is Kevin Hassett, a man who has been much mocked for making the worst economic prediction since Irving Fisher declared stocks to be at a "permanently high plateau" ... in 1929. A Hassett-bylined column on the WSJ opinion page is not where most economists tend to look for solid, peer-reviewed analysis, so we'll leave the painstakingly researched disembowelment of his argument to others. But the mere appearance of such an argument with less than two weeks to go before Election Day is still worth appraising. Kevin Hassett is an adviser to Mitt Romney -- he's someone who will have real influence on economic policy if Romney wins. So the real question here is not how wrong his argument might be, but why he is making the argument at all. Why does Kevin Hassett want us to believe that income inequality is not getting worse?

Could it be because there's increasing evidence that widening income inequality isn't good for economic growth? Could it be that the entire cathedral of supply-side dogma, entrenched in U.S. economic policy for three decades, crumbles into rubble when you realize that it's not good for the economy when the rich get richer at the expense of everyone else? Could it be that the data on income inequality refutes everything Mitt Romney stands for?

The current issue of the quarterly magazine of the International Monetary fund, Finance & Development, highlights the research of two IMF economists who argue that there is a clear connection between inequality and the health of an economy: "Countries with high inequality are far more likely to fall into financial crisis and far less likely to sustain economic growth."

The researchers, Andrew G. Berg and Jonathan D. Ostry, focused specifically on the "duration of growth spells," which they defined as "the interval starting with a growth upbreak and ending with a downbreak."

"We find that longer growth spells are robustly associated with more equality in the income distribution," they wrote.

The IMF study naturally attracted the attention of the New York Times and other media outlets, but the argument that income inequality isn't good for economic growth is hardly new. As Claude Fischer, a sociologist at the University of California, Berkeley, who has written extensively on income inequality, pointed out in a blog post commenting on the IMF study, researchers have been making just such an argument for at least 20 years.

But this remains important to repeat – not just because reporting the baleful effects of inequality now has the imprimatur of the IMF, but also because so many people still resist the news; they insist instead on believing the opposite, that inequality stimulates the economy, to the benefit of everyone. And, of course, this insistence has political implications right now.

It sure does! Just one month ago, on Sept. 22, Mitt Romney spelled out what this election is all about. In an interview televised on "60 Minutes" Romney responded forthrightly to a question asking whether his 14 percent tax rate was "fair."

Yeah, I -- I think it's -- it's the right way to encourage economic growth, to get people to invest, to start businesses, to put people to work.

In other words, the question of "fairness" shouldn't even come into the conversation: Income inequality -- unfairness -- is good for America. Because that's what Romney is really saying. In the context of an era in which the richest Americans have grabbed a larger and larger share of the national income, Romney has consistently argued that it is appropriate for the wealthy to pay a smaller percentage of their income in taxes than the middle class or poor, because keeping the load light on the upper crust will be good for economic growth that benefits everyone. It's classic supply-side, trickle-down economics, warmed-over Reagan revolution boilerplate. And it perfectly represents the ruling philosophy of the U.S. for most of the last 30 years.

This means it's a big deal if the evidence shows that the opposite case is true -- that allowing the rich to devour a larger and larger slice of the pie isn't good for the economy. If widening inequality puts a damper on economic growth, then the Romney campaign finds itself in a bit of a pickle.

It can try arguing, a la Hassett, that growing income inequality just isn't happening: Hey, look over there, at all those kids with cellphones and living rooms full of HDTVs! Even poor people have air conditioners now, so who cares how many yachts or car elevators the 1 percent own?

But that's an argument that keeps running head on into the lived reality of Americans: the escalating costs for healthcare and college education, the shrinking benefit packages, stagnating wages and family income.

Or it can even try, as Hassett also does in his Op-Ed, to argue that the growth in the safety net adequately compensates for widening income inequality. In this framework, when we look at the widening gap between rich and poor, we're not taking into account food stamps and Medicaid and extended unemployment benefits.

But that argument creates an immediate paradox. Romney's case for why he'd make a better president than Obama is largely predicated on his promise to reduce the size of government, and trim back the welfare state. That means carrying out his agenda would remove what his adviser already admits is one of our chief coping mechanisms for dealing with growing income inequality!

According to the IMF researchers, one reason why recent economic recoveries have been so weak compared to what we witnessed prior to 1990 is precisely because widening inequality has hollowed out the middle class. Without a thriving middle class, there simply isn't the broad-based demand necessary to fuel fast economic growth.

It's good to have people around with cash in their pockets to buy things. This is a principle that was recognized as far back as 1914, when Henry Ford surprised his own employees, his competitors, and the business press by raising wages for his workers to a princely $5 a day. His motivations were certainly mixed -- in part, he just wanted to reduce attrition -- but he also clearly saw that there was a huge advantage to paying his workers well enough that they could afford to purchase the cars that they were assembling. He saw the benefits inherent in jump-starting a market for his company's products. (He also shortened the work week, reasoning that workers with more leisure time would spend more of their cash on consumption.)

We live in quite a different world now, one in which the dominant ideology among corporate executives and the Republican Party holds that squeezing workers while generating maximum profits for shareholders is the best way to achieve economic growth. Few men who have run for president exemplify that ideology more than Mitt Romney. Most Republican politicians simply believe that keeping taxes low on the rich and screwing workers is the right economic philosophy. Romney actually did it.

And that tells you all you need to know why one of his economic advisers is claiming that growing income inequality isn't actually happening. Because if it's not a problem, then it certainly can't be responsible for slow economic growth, and thus, can't negate the fundamental underpinnings of conservative economic dogma. If it isn't happening, we can cut taxes some more, slash government services and sail merrily forward on the path Ronald Reagan trail-blazed. That's what this election is about.