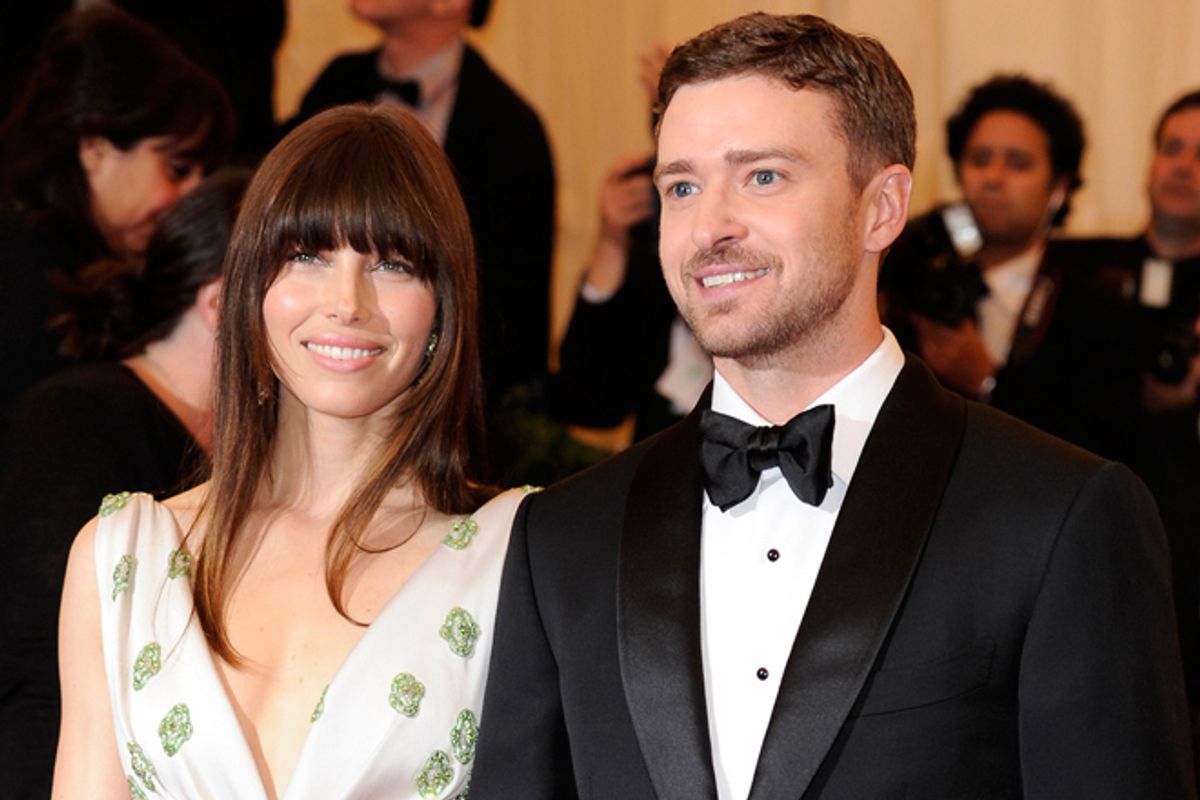 What do you give the couple that has everything? Well, there's always a few Hollywood transients, I guess.

On Wednesday, Gawker posted a clip from an eight-and-a-half minute video unveiled for the multimillion-dollar Italian wedding of Justin Timberlake and Jessica Biel, produced by Timberlake's L.A. real estate agent friend Justin Huchel. The video features messages from "your Hollywood friends who couldn’t make it" -- a selection of Los Angeles-area transients -- because what is better when you're celebrating your eternal love than laughing at the poor?

In the Gawker piece, John Cook describes the video, including how a "glassy-eyed apparently homeless man woozily tells the camera, in a lengthy and rambling monologue, "Jeez I miss you so much. I wish I could be there," and an off-screen voice that asks another transient man, "Did you and Jessica mess around?"

Yet the video's creator, Justin Huchel, apparently does not have a sense of humor about everything. When Gawker approached him for comment, he had his attorney respond that "Mr. Huchel made a video to be used and exhibited privately at Justin Timberlake's wedding as a private joke without Mr. Timberlake's knowledge." He also then threatened "swift action" against Gawker for posting the "stolen" video, which it has since removed. This being the Web, of course, you can't stop the signal. It's still on YouTube, where you can watch a hooded, mostly toothless man who cracks, "Justin and Jessica, I haven't seen you for a long time. I hope the wedding goes fine for you. My gift is in the mail." There's an apparent trans prostitute who wishes, "Good luck and -- watch your man." There's the inevitable shirtless guy, encouraged by an off-screen voice to "go skins." In short, it's roughly as uproarious as Ann Coulter's Twitter stream. It's credited as offered with "Love Huch and Rachel."

It's pretty clear from the video that Mr. Huchel should leave the comedy film stylings to his famous friend. But in case there was any thought in your mind that this was just some lighthearted if lame lark in which the participants were in on the joke -- let me assure that no, it was plain old gross.

On Thursday, TMZ posted an interview with the wedding video's toothless man, identified only as "Eddie." In it, he appears considerably more spiffed up than in his last Internet performance, a fact he acknowledges by admitting that he's looking for work. "I'm gonna do my best to change my life," he says.

He also tells the tale of how he was approached by a man in Hollywood and offered $40 to say a few prewritten lines. "A lot of people know me … and know I need a little help," he says, adding that the man told him, "I want you to say a few things for somebody I know that's going to get married." He says he didn't know whom the clip would be used for. "That makes me feel really bad," he says. "That was a trick played on me."

It appears that neither Timberlake nor Biel had prior knowledge of the video. On Friday Timberlake issued an open letter on his Web page to state, "I don't live my life making fun of people (unless, of course, I'm making fun of myself on SNL)... Especially, those who are less fortunate or those in need. I grew up with a family and community that instilled ideals in me like hard work, honesty and empathy. As a matter of fact, growing up in Tennessee, I was always taught that we as people, no matter what your race, sex, or stature may be, are equal…. As it pertains to this silly, unsavory video that was made as a joke and not in any way in mockery: I had no knowledge of its existence. I had absolutely ZERO contribution to it. My friends are good people. This was clearly a lapse in judgment which I'm sure no one who is reading this is exempt from. But, I don't believe it was made to be insensitive. … Like many silly rumors that I have been made aware of about the week: It was NOT shown at my wedding. I think we can all agree that it was distasteful, even though that was not it's [sic] intention." (Can I just interject here and ask, does anybody know the difference between it's and its anymore?) He concludes by noting, "I want to say that, on behalf of my friends, family, and associative knuckleheads, I am deeply sorry to anyone who was offended by the video. Again, it was something that I was not made aware of. But, I do understand the reaction and, by association, I am holding myself accountable."

It's a gracious sentiment, one in which Timberlake acknowledges the video is distasteful while still being loyal to his "good" friends who merely suffered a "lapse in judgment." He handled the situation as tastefully as he could under the circumstances. But the fact remains that it's a lot crueler to "lapse" when you're a wealthy realtor making a joke for your millionaire friend. It's beyond crass to make sport of the homeless when you're peddling $95,000,000 homes. And if you can judge a man by the company he keeps, Timberlake is keeping company with someone who thinks the value of a fellow human being's dignity is two $20 bills.