"Parks and Recreation": One of the only sitcoms that knows how to portray love 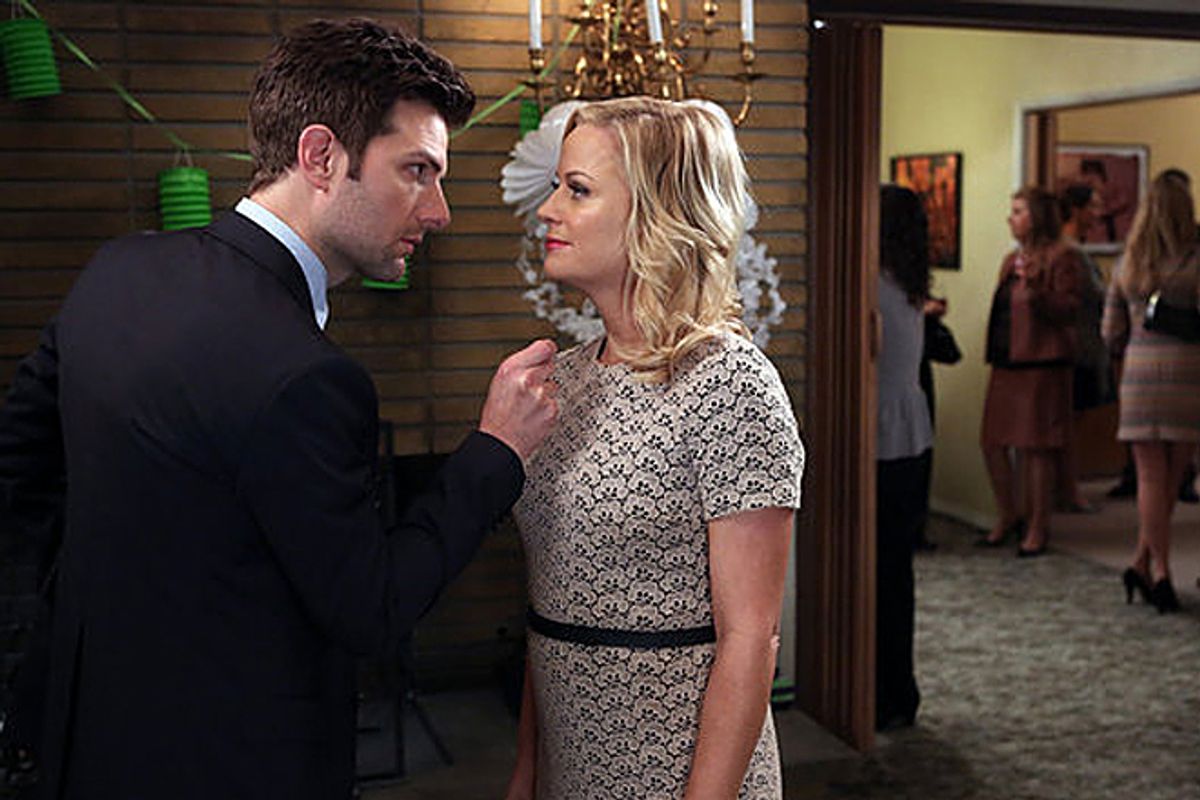 Last night’s episode of “Parks and Recreation” was titled “Halloween Surprise,” but it overflowed with treats, not tricks. They started small and sweet — Donna’s art-imitates-life arc as a prolific tweeter, Ron trying out Solomonic wisdom on two little girls, Leslie’s Rosie-the-Riveter-Is-a-Total-Hottie costume, Tom trying to make fart attack happen, among others – and ended with the big tear-jerking sugar rush of Leslie and Ben’s perfect engagement.

The proposal came as a surprise to Leslie. Ben wrapped up his campaign in D.C., only to get offered a job in Florida that would keep him and Leslie long distance. Ben loves his job, but as the end of the episode made clear, he loves Leslie more. He showed up at the house they had been planning to lease together and dropped to one knee. ”I am deeply, ridiculously in love with you …" he began, only to be interrupted. “Wait, I need to remember this, give me a second,” Leslie said. “I need to remember every little thing about how perfect my life is right now at this exact moment.” The writing in this scene was good, but it was Amy Poehler and Adam Scott’s teary happiness and cracking voices that made the moment so contagiously happy.

“Parks and Rec” really found itself as a series when it stopped trying to copy “The Office,” and let Leslie blossom into an ultra-competent heroine, not a boorish Michael Scott clone. But one thing “Parks” did import from “The Office” is a way with big romantic moments. (“The Office’s” track record on this front includes Jim and Pam’s first kiss, their wedding, and Michael and Holly’s engagement.) The difficulty with these scenes — as hundreds of other shows have demonstrated — is that big emotions can turn cheesy, and too many jokes in this context can be distracting. What “Parks,” like “The Office,” does so right is to embrace the earnestness, not of the situation, but the characters, to mess formally with the moment (to have a quickie wedding at Niagara Falls play out against a group homage to a viral wedding video or take an unexpected big pause) but not with the feelings, which are deep and big and allowed to be.

The engagement also stayed true to Leslie's and Ben’s characters. Here was Leslie, ecstatically, lovingly, bossing Ben around for all the right reasons even as he’s proposing. Here was Ben, appreciating her commanding, perfectionist streak even as she's interrupting him.

All the things in the episode that came before the proposal suggest that Leslie and Ben will remain themselves as they go forward, with all their attendant problems. Ben still loves his job. Upon hearing Jerry’s declaration, that “as long as the people I love are a part of my life I’ll be fine,” Leslie had just replied, “Oh my God, your life is so depressing. No thank you.” These two crazy kids both still have their ambitions, but now they have each other, too.