Too bad we can't re-reelect FDR

He's no Roosevelt, but we have to reelect Obama -- and push him to live up to the New Deal architect's legacy 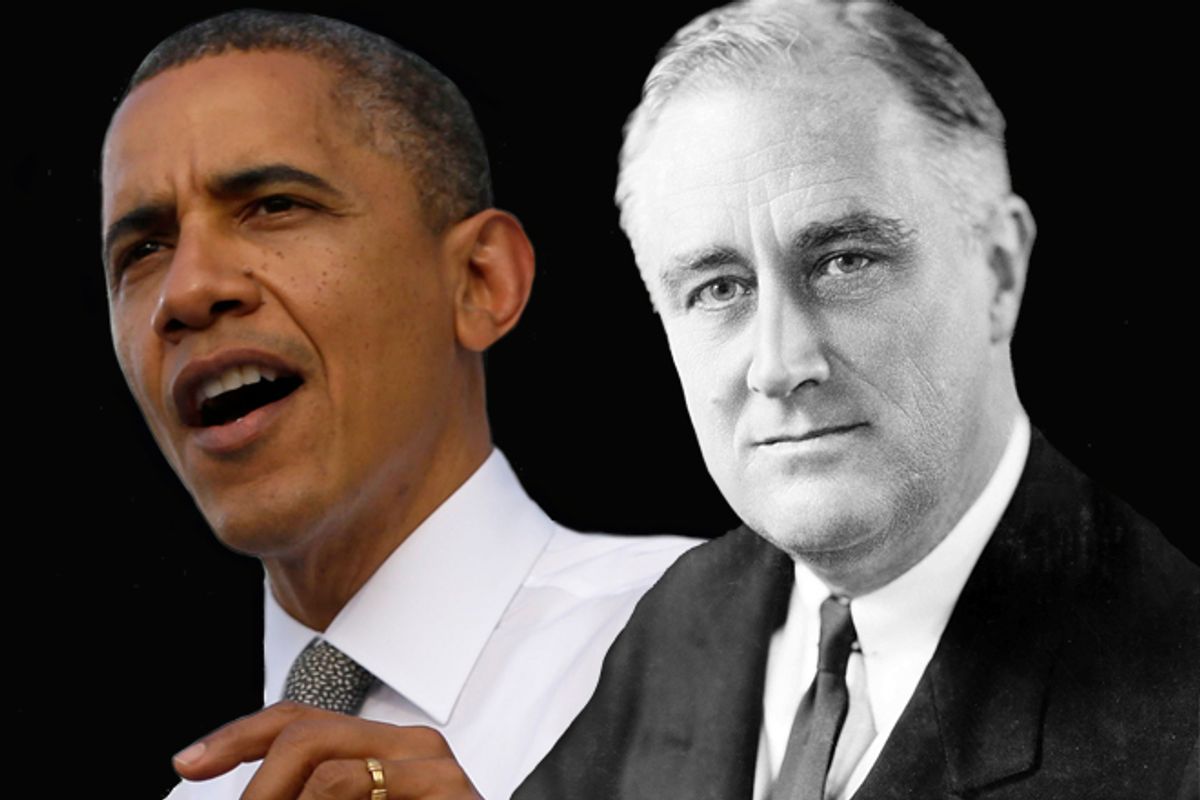 On Oct. 19, former President Bill Clinton, Gov. Andrew Cuomo and Mayor Michael Bloomberg all turned out for the dedication  of the Franklin D. Roosevelt Four Freedoms Park on Roosevelt Island in New York City.  And all of them, along with newsman Tom Brokaw, who hosted the proceedings, and Ambassador William J. vanden Heuvel, who led the campaign to construct the long-delayed memorial park, spoke eloquently of FDR’s greatness in leading the nation through the Great Depression and Second World War and proclaiming the promise of the Four Freedoms -- “Freedom of speech and expression … Freedom of worship … Freedom from want … Freedom from fear …” – a promise that has inspired generations ever since he pronounced it on Jan. 6, 1941.

Of course, with the November elections imminent, not only politics past but also politics present was on everyone’s minds – especially since a Republican triumph at the polls threatens to make Roosevelt’s legacy and vision a matter of history.  Drawing a parallel between FDR’s day and our own, Clinton observed how “we too [must] decide whether to build a country that benefits the many and not just the few.” And even the billionaire Mayor Bloomberg felt compelled to say that “The four freedoms celebrated here are much more than a symbol of a past that most of us do not remember. They form a challenge to the present.”

And yet, as much as Clinton, Cuomo and Bloomberg urged us to not only remember Roosevelt’s accomplishments and words, but also embrace the challenge they represent, they never spoke of what truly made FDR great and what those of us who would seek to progressively advance the promise of the Four Freedoms must remember and rededicate ourselves to.  A need that becomes all the more imperative as we look beyond Nov. 6.

Ambassador vanden Heuvel pointed toward it when he said, “President Roosevelt was a voice of the people during the most difficult crises of the 20thcentury.” But he didn’t go far enough.

Indeed, it was a faith and confidence that enabled him to lead his fellow Americans to become the “Greatest Generation.”  The generation that not only saved the United States from economic destruction and political tyranny and turned it into the strongest and richest nation in history, but also made America – despite fierce conservative and corporate opposition – freer, more equal and more democratic than ever before.

Sadly, we do not have that kind of political leader today. We imagined we might when, in the face of the worst economic and social crises since the 1930s, Barack Obama reminded us that “Yes, we can!”  Magazine covers portrayed him as the Second Coming of FDR. Liberals and progressives spoke hopefully of a new New Deal. And conservatives worried about a new Age of Roosevelt.

Obama, however, was no FDR.  He would achieve much in his first two years in office. But he could have achieved so much more. Having rallied a majority of Americans, especially the young, to vote for him, he issued no call to action, he pursued no project of empowerment, he undertook no democratic mobilization. He failed to harness the energies of his fellow citizens and engage them in the labors and struggles of economic and political renewal. And while he was negotiating with Republican politicians and corporate executives, bankers were taking fresh bonuses and Tea Partyers were filling the public square and mobilizing for the midterm elections of 2010.

As much as we might wish we could, we cannot re-reelect FDR. But we can do more than simply recall his achievements, recite his words and wish for better days to come. We can live up to his democratic faith and confidence in us.  We can vote to reelect Obama and send more Democrats to Congress.  And then we can, as FDR would expect of us, organize, mobilize and do our damnedest to make a Democratic president do the right thing. And if Romney and the GOP win, well hell, we can organize, mobilize and do our damnedest to safeguard the legacy and vision of the greatest democratic leader we have ever had.