What's the matter with (some) white men?

Stereotyping white voters as monolithically pro-Romney hurts the president. He has a problem with (some) white men 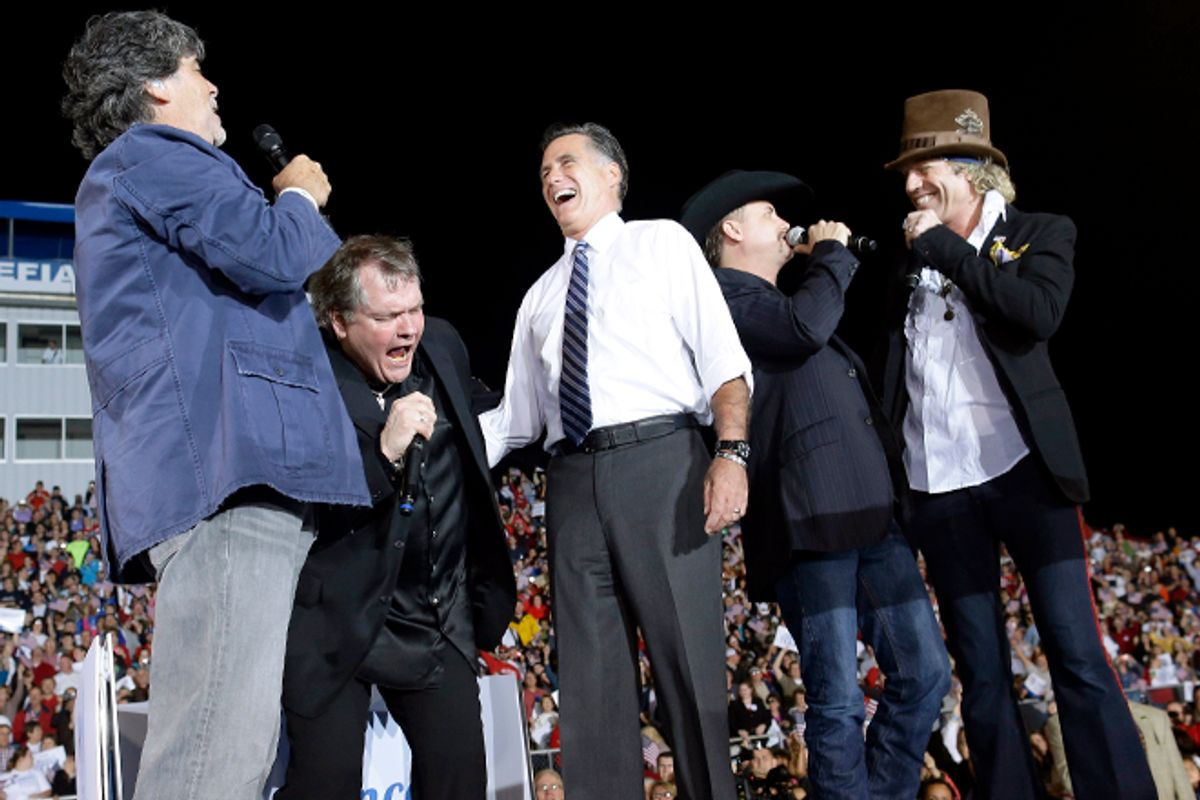 This week's media truism is that President Obama, always behind with white voters, is suddenly losing them overwhelmingly to Mitt Romney, and that accounts for the October surprise (that shouldn't really be one): This is a very tight race.

There's no doubt that Obama's Oct. 3 debate performance hurt him politically and in surprisingly lasting ways. There's also no denying that since the debate (we can't say exactly why), almost all of the president's lost support and Romney's sudden gains have come from white voters, particularly white men, and especially white men without a college education.

But the tendency of politicians and pundits to generalize about white voters is troubling. It's lazy. The president does well with white voters in some states and horribly in others. He carries certain white sub-groups in some regions, and not in others. We know he's losing overwhelmingly with white Southern men, particularly those without a college education. In every other place, with every other sub-group of whites, it's more complicated.

I think it's dangerous for Democrats to generalize about Obama losing big with "white voters" or to let the media get away with it. If another big truism this week is that perception matters -- that candidates' claiming victory actually helps them politically (which is why the desperate Romney is telling every crowd that'll listen that he's going to win) -- then why are so many Democrats accepting without pushback the narrative that Obama is hemorrhaging white votes overall?

First, the national picture. In the latest ABC News/Washington Post poll, Romney leads Obama 60 percent to 37 percent among whites. His support among white men reached its highest level of this campaign, 65–32 percent. (McCain won white men 57–41 percent.) The poll found Romney particularly gaining with voters on two questions, his handling of the economy and who has more empathy, and those gains were largest among white men without a college degree.

The Washington Post pronounced this "the deepest racial split since 1988" and suggested that Obama could ultimately suffer the worst loss with whites since Ronald Reagan trounced Walter Mondale 64–35 percent. This would be especially remarkable since Obama did better with white voters in 2008 than white Democrats John Kerry, Al Gore and Bill Clinton in 1992 (he tied Obama with 43 percent, getting re-elected in 1996).

Yet in the swing states, Romney doesn't have a 60–37 percent edge among whites: The two men are essentially splitting the white vote. (Warning: It's surprisingly hard to get state data broken down by race – especially in overwhelmingly white states). "He's running better among working-class whites in the upper Midwest battlegrounds of Iowa, Wisconsin and Ohio than anywhere else, and that is his last line of defense in this very close election," the National Journal's Ron Brownstein told CNN. Most people believe the auto restructuring is the reason for the president's relative strength there -- one sign that Democrats improving people's lives can pay off politically, especially with that Republican-leaning constituency.

According to some of the polls collected on the Real Clear Politics state pages, for a while Obama had a lead with white voters in Ohio, but he lost a little ground to Romney in October. Yet in the latest Time poll (which showed a bigger drop in white support than other polls have), he's still winning Ohio's white women 49–43 percent. Most interesting, the polls that break out whites without a college education from whites who have one show Obama is doing better with Ohio's non-college-educated whites than with whites who went to college. (It's usually the other way around for the president.)

"We make a huge mistake when we say this is a white-black issue or that this is about having an African American president" in Ohio, says Democratic Party chair Chris Redfern. Party data shows Obama winning so far among whites who have voted early, though he is likely to lose whites who vote on Election Day to Romney. Even if Romney carries the white vote in Ohio, it will be narrowly; Obama is likely to win among white women and young white voters, and he could still win non-college-educated whites.

Likewise, the two men are essentially tied among white voters in Iowa and Wisconsin, two states that are still very white. "In the worst case, [Obama] will split the white vote, and he may win it," says Madison-based Democratic pollster Paul Maslin.

In solid blue states, Obama is either leading among white voters or tied, while Romney is trouncing Obama with white voters in the red states. One problem with tracking the vote racially in either red or blue states is that pollsters aren't doing much research in places where one candidate already has it in the bag. In the last presidential poll in Mississippi, for instance, that I could find on Real Clear Politics, only 16 percent of white voters "approved" of Obama. It's safe to say the president will lose Mississippi whites by a comparable margin.

There's no doubt that the overwhelming support of Southern whites is pumping up Romney's share of the white popular vote. Yet Nate Cohn and Steve Kornacki argue convincingly that Obama's popular vote problem has more to do with underperforming his 2008 totals in blue states than losing big in the South (since he lost big last time around, too). Some of that trouble comes from blue-state black and Latino registered voters who aren't considered "likely" voters this time around. But clearly some of the lower turnout in blue states that Obama is likely to win will come because of diminished white-voter support.

That's certainly true in overwhelmingly white Wisconsin, where Obama won by 14 points in 2008 and is expected to win by a much smaller margin in November (if he wins at all; he's holding a small but steady lead). Pollster Paul Maslin says that's partly due to the frustration of white working-class voters who've essentially swung to the opposition party because of the economy over the last decade – to Democrats in 2004 (narrowly), 2006 and 2008, and then to Republicans in 2010. "It's almost a sense of "whom do we take it out on this time?'" he says.

Still, it's worth asking (even if we don't have answers) why Obama's first debate performance seemed to have hurt him so badly with white voters, and particularly white working-class men. My hunch is that apart from racism or cultural distrust (which certainly exist), working-class whites are more affected by whether Obama seems ready to fight for them. Maslin agrees.

"If you leave aside the haters, white voters have been saying two things: 'I like him personally, but I don't see [economic] results,'" the pollster says. "I think they needed to see him saying in that first debate, 'There are going to be results, I'm on top of it, I'm energetic about it and God damn, it's going to get better.' Instead they got a guy who seemed detached. There was no story or narrative or energy there. I think people started to say, maybe it won't get better."

Of course, if race didn't play any role at all, support from black and Latino voters who are anxious about the economy would have also declined after Obama's first debate, and it didn't.

According to more recent polling by other outlets, Obama has an indisputably large problem with Southern white men, and to a lesser but still serious extent, Southern white women. He's also got a problem with non-college-educated white men, although not so much in the Upper Midwest, where the auto restructuring clearly helped politically. He's struggling with married white women, but he does well with single white women and younger white women, and with young white voters (although there he may have a turnout problem). And all of that, of course, varies from state to state.

If the narrative about who's ahead matters (and I think it does, to some extent), Democrats might do better with white voters if they weren't always insisting "white voters" don't like Democrats, or assenting when pundits say so.