12 threats to your vote 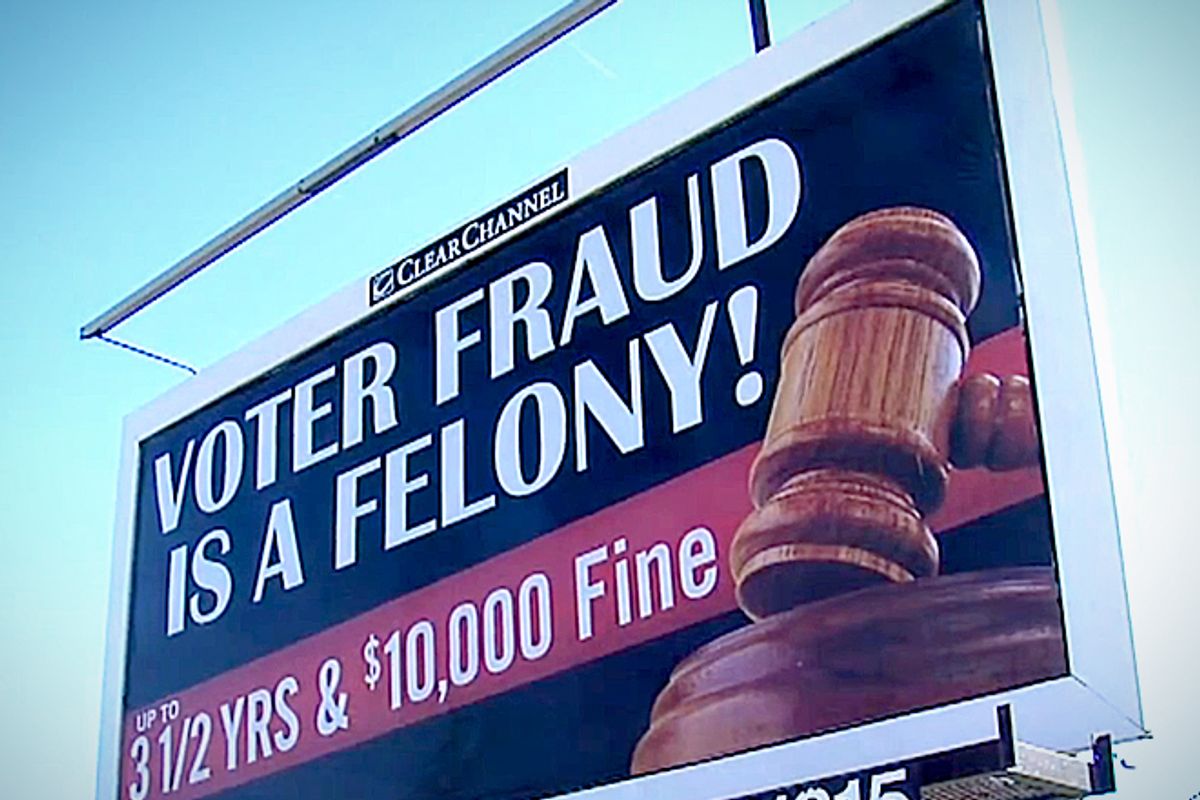 With just 10 days left to go until the election, this is where the campaign can get a bit sketchy as candidates and their allies pull out all the stops and reach into their bags of dirty tricks to suppress, intimidate or otherwise improperly manipulate the vote. We’ve rounded up all the shadiness you should be looking out for.

Vote by phone: Residents in Florida, Virginia and Indiana have received phone calls erroneously telling them they don’t need to show up at the polls on Election Day because they can vote by phone. The callers falsely identified themselves as actual election officials. Indiana's Secretary of State's office has investigated the calls and found a suspect firm, while Virginia's State Board of Elections is currently looking into them.

Intimidating billboards: Dozens of intimidating billboards popped up in predominantly black and Latino neighborhoods in Ohio and Wisconsin warning about steep penalties for voter fraud. Most had a large picture of a judge's gavel and said, "Voter Fraud Is a Felony!" punishable by up to three and a half years in prison and a $10,000 fine. Others showed prisoners behind bars with a message about voter fraud. ClearChannel, which owns the billboards, said they were paid for by “a private family foundation,” but has agreed to take them down as they have a policy against anonymous political advertising.  Meanwhile, the state of Pennsylvania has refused to take down billboards in Spanish telling people they need to present ID to vote even though a judge recently scrapped that requirement. There are also misleading ads on buses. Meanwhile, the state GOP-controlled government also said it won’t send out mailers informing people they no longer need an ID to vote.

Phony letters: Voters in at least 28 counties in Florida have received bogus official-looking letters saying they may be ineligible to vote. The fake letters were sent under the names of real Florida election supervisors and stated that "information" had been discovered about their citizenship status that made them “doubt your eligibility as a registered voter." The FBI and U.S. Postal Service are investigating.

Wrong day: Election officials in Maricopa County, Ariz., where Sheriff Joe Arpaio is in a tough reelection battle, have twice given the incorrect date of the election to Spanish-speaking voters. First, officials sent letters in Spanish with the wrong date, then they distributed bookmarks that had the correct day in English on one side and the incorrect day in Spanish on the other. Arpaio’s campaign also dispatched a robocall suggesting it was illegal for people to have someone else deliver their early voting ballot to election officials (it’s not). Meanwhile, in Ohio, the Republican-run Ottawa County Board of Elections sent a mailer to 2,300 voters informing them that Election Day was Nov. 8 and telling them that their voting location had been moved to a building on the east side of a high school. The actual location is on the west side.

Robocalls: Robocalls have similarly been used in the past to deceive voters about the date of Election Day, to give them false information about how or where to vote, or try to get people to stay home. Last year, the former campaign manager for former Republican Maryland Gov. Robert Ehrlich was convicted of orchestrating over 100,000 Election Day robocalls in 2010 telling black voters that they could “relax” at home because Democrats had already won (polls hadn’t even closed yet). Voting rights advocates say they haven’t seen these yet, but expect to as we get closer to Election Day.

Poll challengers: In most states, political parties can send a representative to polling station to challenge the eligibility of voters they think don’t have a right to vote. This can cross the bounds into voter intimidation. In New Mexico, Republican officials conducted a training course in which they instructed poll challengers to do things they are not allowed to do, such as demand ID. Poll challengers in Roswell had to be removed by police in 2010 for intimidating voters. Meanwhile, a conservative group called True the Vote hopes to train up to 1 million monitors and challengers before Election Day. Election rights groups say the large numbers of monitors could be intimidating and discourage some people -- particularly minorities -- from voting.

Last-minute purge: While several states have conducted controversial voting roll purges this cycle, especially Florida, Colorado distinguishes itself with the lateness of its most recent effort. The Republican secretary of state, who in August tried to purge thousands of alleged noncitizens from voting rolls, announced Tuesday -- just two weeks before the election -- that he had identified 300 more suspected noncitizens on the state’s rolls. They will be asked to prove their citizenship or face removal from the polls. The nonpartisan National Association of Latino Elected and Appointed Officials (NALEO) warned that the purges have a "disproportionate chilling effect on voting by eligible Latino voters.”

Employer pressure: Numerous cases of employers overtly or subtly pressuring employees to vote a certain way -- usually Republican -- have surfaced. While it’s illegal to threaten employees or offer a quid pro quo for their vote, employers can make their point clear without running into any legal trouble. Mitt Romney also personally told employers on a conference call in June to tell their employees to vote for him.

Police warnings: While voting rights advocates say they haven’t seen it yet this year, in other cycles, letters and calls have gone out to voters, especially in minority neighborhoods, falsely claiming that you can’t vote if you have unpaid traffic tickets or owe child support. Other times, voters have been warned ominously that police will be stationed at the polls.

Targeting registration groups: Election officials in Florida put such odious restrictions on people registering voters that many groups like the League of Women Voters pulled out of the state entirely. In Virginia, the Romney campaign recently claimed a nonpartisan registration group called the Voter Participation Center was registering dead people and dogs. The campaign tried  -- unsuccessfully -- to get the state to shut them down.

Polling placement: One common tactic is for partisan election officials to put polling places in obscure places so as to make it harder for voters in a certain precinct to vote. Voting rights advocates say they haven’t seen that yet either, but are looking out for it. In Ohio, Republicans tried to put the early voting location in Toledo way out in the white suburbs instead of downtown.

Did we miss anything? Let us know and we’ll update this list as we hear about problems.