America's next top mortician: "It really improves your life to be around corpses"

"Ask a Mortician," Caitlin Doughty's popular, droll web series, has an agenda: to get us to embrace our mortality

By J. B. Staniforth 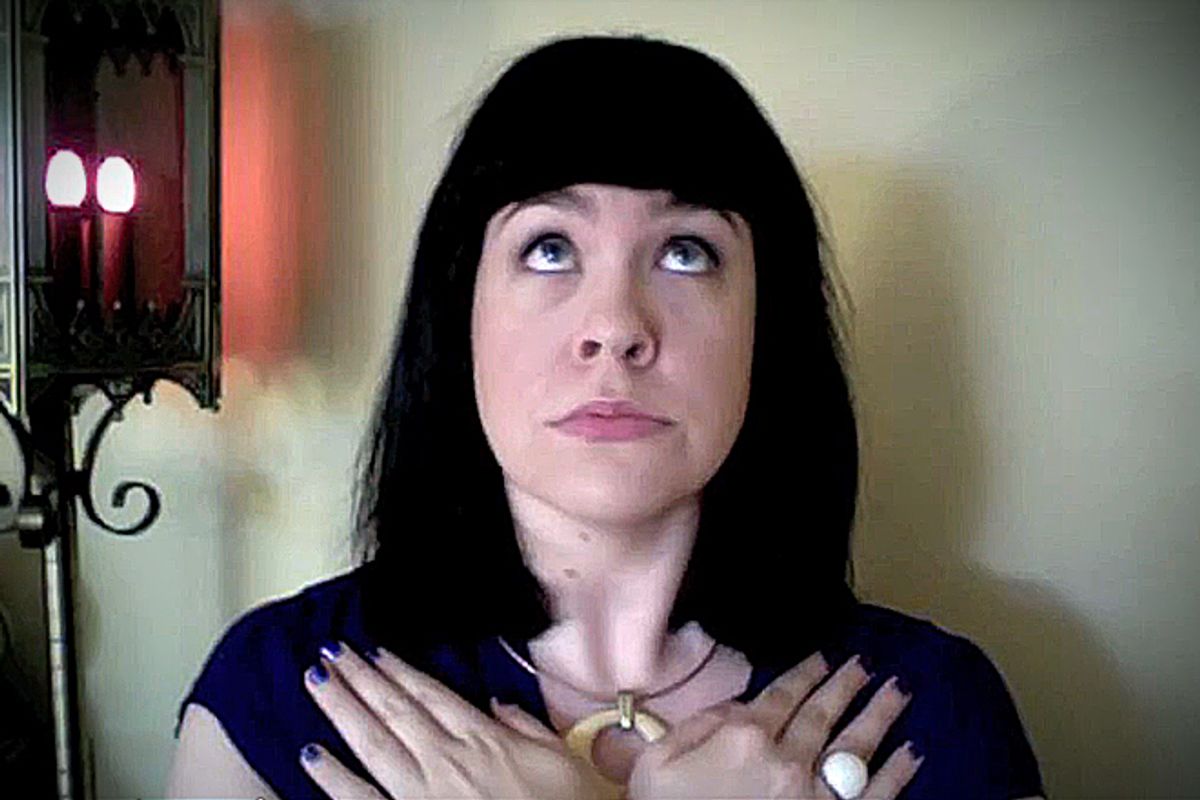 Caitlin Doughty, from "Ask a Mortician"
--

When we think of morticians, we certainly don’t imagine a bubbly, self-effacing 28-year-old woman like Caitlin Doughty. But that’s who you’ll encounter in “Ask a Mortician,” the YouTube series she has been posting over the past year in which she discusses death, decomposition, funeral practices and grief.

The darkly funny shorts — there are 12 installments to date — have drawn in 434,000 views. Doughty gleefully describes the gory details of her job, answering questions like: “Is it true caskets sometimes explode due to the gasses released in decomposition?” (Yes); “Do crematory operators cut the leg tendons of corpses to prevent them from sitting upright as they burn?” (No); and “What do decomposing bodies smell like?” (“Citrus fruits, licorice and fish, mixed in a bucket and left in the sun for several days”).

Following the death of Whitney Houston, Doughty introduced her lay audience to the term “skin slip,” which refers to the skin of a corpse detaching from the decomposing flesh beneath it (it happens quickly if a person expires in warm water, as Houston did). Another fact: Corpses sometimes soil themselves after expiration. “But it’s not universal,” she says, “like you walk toward the white light and — defecate.” On one video, she baked a cake with faux-cremains (made of wood ash and clay) for a viewer who wondered if he could have this done with his ashes. She iced the cake with the message “Sorry U Died!” and sampled it, cringing on-camera. “You can bake your cremated remains into a chocolate cake,” she said, “but if you love your family and friends that you’ve left behind, don’t do that if you want them to enjoy the chocolate cake.”

Doughty uses her gallows humor to lighten the mood to great effect. But she isn't out to entertain the masses for entertainment's sake. She started her “Ask a Mortician” series, together with the Order of the Good Death — a web forum she founded for death professionals, academics and artists to promote the open discussion of death and dying — as a platform to spread her conviction that we need to drastically change the way we confront death, which she feels is weighted down by denial. The unwillingness to accept death as it is, as she sees it, means that Americans are unable to grieve properly through rituals that allow us to mourn deeply, honestly and openly. “I take my job and this whole movement incredibly seriously. I do [the videos] with a sense of humor, but it’s my life, and it’s really important to me that a positive death message gets across.”

"Ritual and working with a dead body really helps you come to that,” she says. But Doughty believes that the “violent, fervent denial of our own mortality,” only exacerbates the confusion, fear and embarrassment we feel when confronted with the dead. Some of Doughty’s fans have told her they lived for years with shame for requesting to see the remains of their loved ones for a last time, even if they were dismembered in death. “But the last 100 years of the death industry has been about whitewashing death. It’s been about euphemisms; it’s been about pulling things behind the scenes.” Doughty insists that the experience of sitting with the corpse for more than a quick viewing, ideally for as much as a couple of days, is central to accepting the circumstance of loss. She stresses that participating in rituals surrounding the corpse can be remarkably healing, “whether that’s washing or dressing the corpse, or taking the corpse to the graveyard and watching it be buried, or taking it to the crematory and watching it be cremated.” Though the practices she suggests may seem shocking to some, Doughty insists that mourners open to this sort of funeral find the experience transformative.

“I’ve never heard of people having a bad experience with that sort of thing. It’s not like some people like it and some people don’t. I only hear positive things: ‘Thank God I did that,’ or ‘That was so important to me,’ or ‘It really changed my perspective.’”

The ebullient mortician had her first encounter with death when she was just eight years old: She saw a child topple over a railing at a shopping mall and fall to her death. The image haunted Doughty for years, so much so that it awakened in her an unwavering curiosity with the morbid. At college (she attended the University of Chicago), she studied the witch trials of the 15th and 16th centuries, and wrote and directed macabre plays based on the lesser-known works of Edgar Allan Poe and Christina Rossetti’s poem “Goblin Market.” “My whole life,” she said, “was death-adjacent.”

Soon after graduating, Doughty moved to San Francisco, where she worked at a crematory picking up dead bodies from funeral homes, cremating the remains and processing the bones to ash. She realized that she had found a calling. “Death is kind of hard, but I don’t have a choice,” she said. “It’s not like I could be an accountant. This is 100 percent what I have to do.”

Though most might perceive her job as a depressing one, Doughty says, “I’m not dealing with the worst part of someone’s life. I’m dealing with someone who’s maybe not about to die, but maybe I’m helping someone with their death fears, or death hang-ups, and that can be a very positive thing that I get to do on the side.” Now a funeral director at a Los Angeles eco-minded cremation company, Doughty has joined a what is generally referred to as the natural-death movement. The most visible products of their work are natural burial cemeteries, of which there are a couple dozen across the U.S., where decedents are buried without chemical preservation or elaborate caskets. And Doughty is working toward opening her own natural-death funeral home.

Doughty is not alone in advocating franker and more accepting attitudes toward death. She names as her influences natural-burial pioneer Dr. Billy Campbell and Hollywood funeral director Tyler Cassity, who was a consultant on “Six Feet Under.” Though her day job doesn’t afford her the luxury of entirely shunning cremation or embalming, as some natural-death proponents do, Doughty supports both the environmental goals of the movement and its openness to putting mourners in closer contact with death. And natural burials are often significantly cheaper than traditional funeral approaches.

By contrast, the mainstream of the American funeral industry is more concerned with practices that Doughty finds appalling, such as featuring QR codes on tombstones, or broadcasting funerals over the Internet so that family can “participate” from home. “It’s basically collective denial,” she says of these innovations. “Ever since paying someone else to take care of the dead became a thing, it’s just been a steady march. Death is hard, and it’s messy, and if you can say, ‘Oh, man, maybe I can just pay somebody to do all this stuff for me,’ people [will give] it to somebody else. It’s taken us on this grand journey to a point where we now broadcast funerals, and that’s considered attending a funeral — watching it online. That’s dystopic. It’s tragic.”

Though Doughty emphasizes death acceptance as the goal of her “Ask a Mortician” videos and work with the Order of the Good Death, her approach has drawn fire from opponents, many of whom have commented semi-anonymously on her Order blog and YouTube channel. One vituperative comment came from YouTube user sborn1571, who concluded, “I have been a FUNERAL DIRECTOR and EMBALMER for over 15 years. Seen it all, and kids like this make me sick,” while YouTube user katlerantics wrote, in response to Doughty’s videos about bone grinding and cremation temperatures, “As a fellow funeral director, I think you are way out of line. We are responsible for keeping a lot of this stuff behind the curtains [...] Educating people is good, but sharing trade secrets is seriously not cool.”

Doughty’s response to her critics has been measured and polite. She encourages discussion, saying she hopes that funeral directors of different backgrounds, working together, can collectively advance the death profession even if they do not agree on the precise means. She laments that she has not heard enough constructive negative criticism, having only heard from those who deride her personally. But for every critic, Doughty has many fans who praise her work and thank her for helping them deal with the loss of a loved one. She admits that “Ask a Mortician” has been a relaxing counterpoint to her daily life as a funeral director. The rates of stress, cancer and alcoholism among funeral directors are high, and she worries that this is in part because many enter the job without confronting its existential realities.

“If I lived in Victorian America,” says Doughty, “my sister would have died, my uncle, my mother. I would have had all these bodies around me all the time, and maybe if I still saw a violent death, it would be horrifying, but it wouldn’t have the same kind of impact as if I’d never had any contact with death at all. For thousands of years, we did have death surrounding us, and we did have people die in the home. You would take care of your own end. You would do ritual processes, and you would be involved in it, and that’s been taken away in the Western world. It really improves your life to be around corpses.”

J.B. Staniforth's book "Real Rock & Roll Tonight: The Rise and Fall of Canada's Greatest Band" will be published next month by Invisible Publishing. He lives in Montreal and reports on Aboriginal issues.

MORE FROM J. B. Staniforth