Do Obama and Romney live in "Homeland"?

While the candidates talk tough on al-Qaida and Iran's imaginary bomb, the real threats facing us go ignored 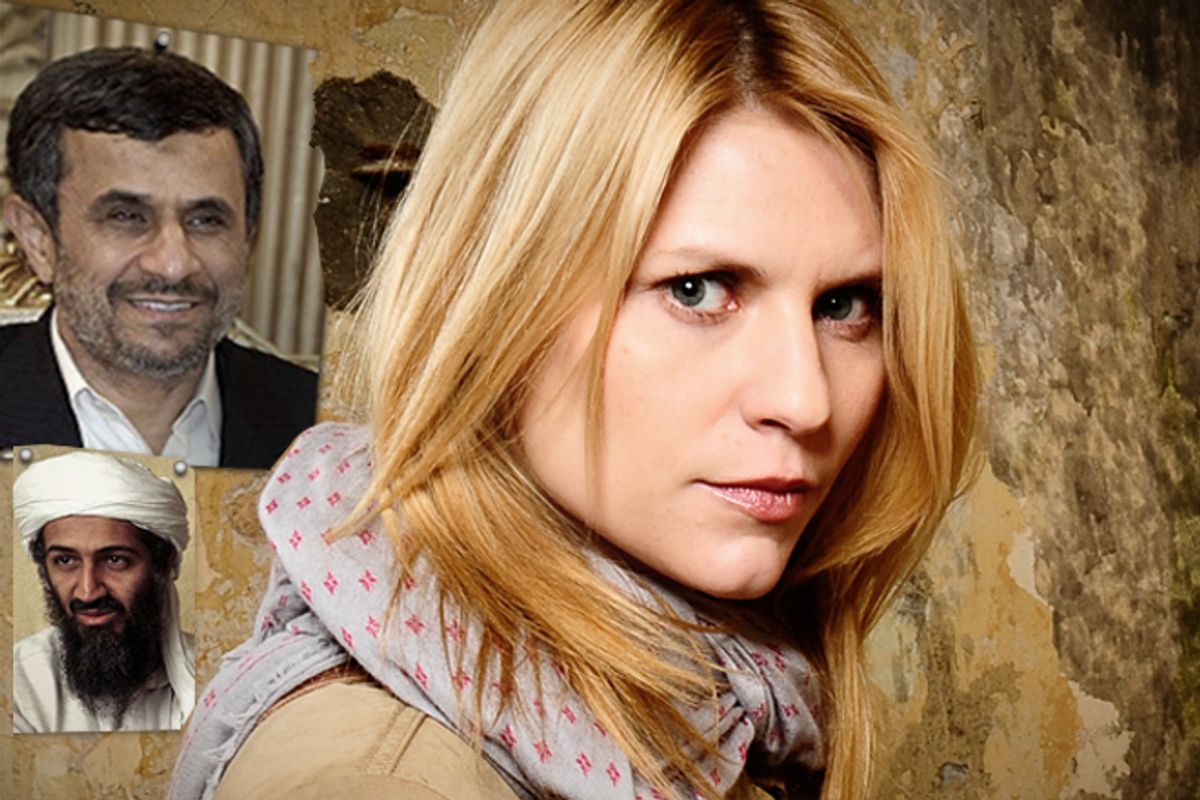 There can be no question about the general consensus that President Obama won last Monday’s foreign-policy debate on style points – and as we discussed last week, style always trumps substance in a presidential campaign. But the two candidates’ Alphonse-and-Gaston routine, where they focused on minor points of disagreement in minor areas of policy and steered away from the biggest problems facing our country in the world, raised some disturbing questions. Here’s one that occurred to me: Are Romney and Obama proposing foreign policy based on what’s happening in the real world, or are they just reacting to events in the current season of “Homeland”?

As viewers of that highly addictive, Emmy-winning Showtime melodrama know, “Homeland” paints a distorted, funhouse-mirror portrait of current events, infused not just with a hysterical level of anti-Muslim, anti-Arab paranoia but also with a current of bodice-ripping eroticism. We have a hunky, brooding United States congressman who is both a closeted Muslim and an agent of al-Qaida – or rather of the seamless web of Islamic terror that, in this entirely fictional universe, unites the disparate forces of al-Qaida, Palestinian militia groups and the Iranian regime – and who is entangled, in star-crossed-lovers fashion, with a blonde, skinny, startled-looking CIA agent battling bipolar disorder. If the series is vastly more sophisticated and less jingoistic than Fox’s Bush-era “24,” its relationship to realism is about the same. Both shows depict something accurately, but it isn’t the real or plausible world. Instead, it’s the disordered collective psychology of America, with its combination of superiority complex, persecution mania and paranoid delusion.

I think "Homeland" is a terrifically crafted TV drama, but much of its appeal stems from its air of moral exhaustion, and even a certain decadence -- all the shenanigans of spycraft and complicated plots against America are the armature for a "doomed love affair," as one of the show's creators recently told Salon's Willa Paskin. In that light, I can't help thinking about the eminent historian and cultural critic Jacques Barzun, who died this week at the impressive age of 104. Barzun got a reputation as a right-winger in the '60s, but his positions were always more analytical than polemical, such as when he contended that the strengths of Western civilization -- internal dissent and self-doubt, increasing personal freedom, a tendency to embrace and romanticize rebellion -- were also the things that would destroy it in the end. You might say that the success of "Homeland" is perhaps a symptom of the decline Barzun diagnosed and also that the West's internal crisis is the show's true subject.

To get back to the presidential candidates, I’m not implying that either Obama or Romney is a nutjob who thinks that the Arab and Muslim peoples of the world are all scheming, 24/7, to blow us up. Both are too calculating for that, in different ways. Admittedly the former Massachusetts governor faked some angry xenophobia earlier in the campaign season to placate the troglodytes on the Republican right. I suspect even they understood that his heart wasn’t in it, and Romney has since abandoned that mask in his fourth or fifth attempt to reinvent himself, this time as a Nixonian world statesman. (If anybody’s been “shucking and jiving” in this campaign, it isn’t the president.)

Obama’s position is perhaps even stranger. He gets depicted as an African socialist revolutionary and treasonous crypto-Muslim by the right, largely because he received a high-end education and can pronounce difficult foreign proper nouns like “Pakistan” correctly. Yet he has also conducted a super-secret war of drone attacks and assassination far beyond anything the Bush administration imagined, arguably crippling al-Qaida and certainly hardening anti-American opinion in many Arab and Muslim countries. As several other commentators have noted, those issues went unmentioned in last Monday’s debate, presumably because the two candidates are in total agreement. What was Romney going to say? “I’ll rain just as much secret death from the sky -- while also being white!”

One way of understanding the debate, in fact, is that Obama and Romney were playing opposing candidates on TV, debating events in the “Homeland” timeline as a way of reaching out to a dim public that possesses less and less knowledge of the world and has almost no sense of the boundary between reality and fiction. Obama said that al-Qaida remains the biggest threat to the U.S., while Romney claimed it was the prospect of an Iranian nuclear bomb. I think you can make a pretty good case that both things are useful chimeras; al-Qaida looks increasingly like a fading, failed franchise operation, while the Iranian bomb does not exist and probably never will.

Of course it’s true that both candidates have seen intelligence assessments on the Iranian nuclear program, whereas you and I have to go on what we read in the paper. But those reports probably indicate that Iran is not all that close to developing a nuclear weapon and that its regime -- setting aside nutso president Mahmoud Ahmadinejad (who is mainly a figurehead) -- is best understood as a rational actor jockeying for tactical advantage rather than a rogue state bent on apocalypse. Quite a few reasonable people have argued, in fact, that even if Iran did acquire nuclear weapons, it wouldn’t necessarily be a world-destabilizing event. I recognize, of course, that no American politician will ever be allowed to express that view. (Pakistan, a thoroughly messed-up and dysfunctional nation whose government pretended not to notice that the world’s most-wanted terrorist was living just outside its capital city for years, is believed to have 115 nuclear warheads. That’s a reason to be frightened.)

While Obama and Romney tried to out-rhetoric each other on the imaginary Iranian bomb, they spent only a few minutes trading barbs about America’s worsening financial and commercial subservience to China, which is not only real but vastly more dangerous. There was almost no substance to that back-and-forth, largely because both men know there is little they can realistically do, at least in the short horizon of one four-year term in the White House. It’s already clear which nation will be the economic superpower of this century. American citizens will need to pull together to ensure that we hold on to some vestige of our civil rights and liberties during an extended “cool war” with China over trade and global influence, but neither of this year’s candidates looks like a poster boy for that issue.

I don’t think either Romney or Obama ever directly mentioned the Israeli-Palestinian issue, which hovers in the middle distance as a motivating force behind so much of the world’s turmoil, just as it does on “Homeland.” (They discussed Israel, but only in the bizarre context demanded by American electoral politics, that being the question of which candidate loves it more passionately.) As with China, there is little or nothing to be done given current conditions, and both candidates presumably agree on something that cannot be spoken aloud: A two-state solution between the Israelis and Palestinians, which has been proposed and partway negotiated numerous times since the 1930s and remains official global policy, is pretty much dead in the water.

Remarkably enough, right-wing Israeli settlers, left-wing academics and the militants of Hamas all agree that the only viable future for Israel and the Palestinian territories is as a single state. They don’t all imagine the same kind of “one-state solution,” to be sure, and both options – the segregated and militarized Pax Judaica of the status quo, or a de-Zionized, binational state that would lose its distinctive Jewish identity – have all the election-season appeal of a poodle turd on the Persian carpet. The only time I’ve felt a glimmer of something close to liking for Mitt Romney came during the infamous “47 percent” recording when he admitted to his millionaire donors in Gated Community Land that, as president, he could and would do nothing about the Israelis and Palestinians. People have accused Romney of wanting to “kick the can down the road,” but he didn’t say that. Instead, he said he would punt:

So what you do is, you say, you move things along the best way you can. You hope for some degree of stability, but you recognize that this is going to remain an unsolved problem … and we kick the ball down the field and hope that ultimately, somehow, something will happen and resolve it.

Statesmanship in action! You can just feel the raw, Ronald Reagan masculinity oozing out of the guy, can’t you? Still, Romney was actually being truthful for once, and Democrats don't get to claim with a straight face that Obama has any better ideas. He’ll make some more boring speeches about the importance of tough negotiations, have a few more tense photo-ops with Bibi Netanyahu and gratefully hand the whole thing off to Hillary Clinton, Chris Christie or whoever takes over in 2017. Faced with the dreary, unsolvable dilemmas that make America look second-rate, ineffective and mildly psychotic, who can blame the candidates for luring us into a fictional alternate universe? At least there, we can be pretty sure that the buff, blue-eyed Muslim terrorist and the cute, nutcase CIA renegade will soon find a way to work through their issues, most likely in a darkened room.