Think sex is strange? A new book that examines the evolution of copulation since the dinosaur era will amaze 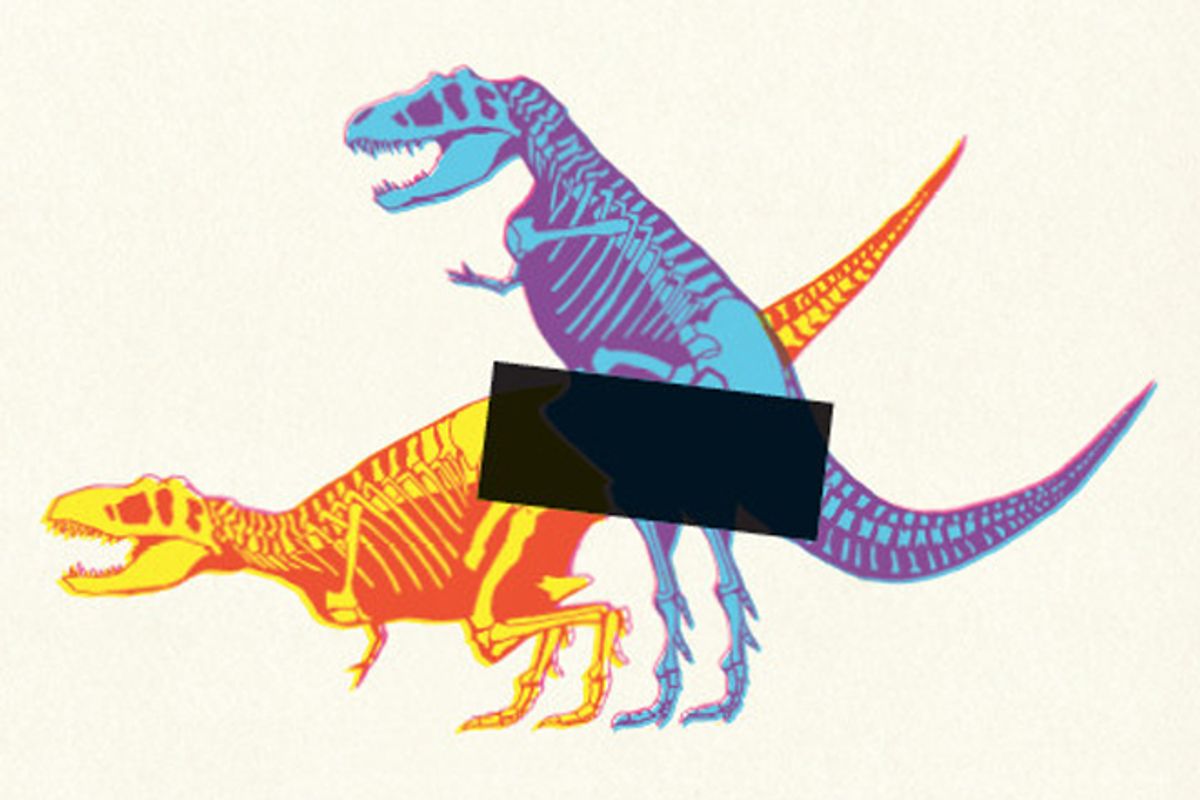 That’s how Long ended up writing his new book about the evolution of copulation, which is cheekily titled, "The Dawn of the Deed: The Prehistoric Origins of Sex." From sharks that mate while doing a headstand on the ocean floor to ducks with enormous corkscrew penises, he humorously details the how and why of that funny little act we call sex. At times, the book is a bit heavy on autobiography of his paleontological finds, but that’s more than made up for by copious entertaining anecdotes about things like fruit bat fellatio and necrophilic snakes. Also, two words: T-rex sex.

In the book, you have all sorts of freaky factoids about sexual behavior in the animal kingdom -- from sperm-drinking catfish to penis-fencing bonobos. What's your favorite tidbit?

Well, you actually hit the nail on the head. I think the sperm-drinking catfish was one that really opened my eyes. That was published in a scientific journal with the bizarre title of “Sperm Drinking by Female Catfishes: A Novel Form of Insemination.” I thought that it was quite amazing how the whole system worked. These little catfish live in really fast-moving currents, and shedding sperm in such water is not a good thing, so they’ve developed this incredible way of instantly fertilizing the female through very subtle canals that go from the mouth and gill chambers down to the ovaries.

Unbelievable. Do you ever break out these factoids at cocktail parties?

All the time! Bear in mind that my cocktail parties are often with other paleontologists and biologists. People ask me about the book, and I just love telling them about how diverse animal sexuality really is.

There have been many books published about animal sexual behavior, and I’ve read quite a few of those, but the thing is, I looked and scoured the scientific literature for current examples of new things that have only really been discovered in the last five years. And that’s why these examples are fresh and different from most other things that have been published.

Why was your discovery of the oldest vertebrate embryo so important to evolutionary history?

There’s been a lot published lately in leading journals about the origin of jawed vertebrates. The thing is that most of vertebrate evolution is pretty well known and understood, but there’s this big gap where we know very little about the beginning of the tree where animals first acquired jaws and teeth, and at the same time they coincidentally acquired advanced copulatory sexual behavior. So when we made this discovery, it was the first evidence that this whole class of extinct animals, the placoderms, at the base of the jawed vertebrate tree, was far more advanced than we ever could have imagined. We would have imagined a primitive fish being something that just spawned in water like most modern fish, but instead they had this really advanced reproductive behavior that sort of also reinforced that a lot of the other structures that they have, their jaws and teeth, were more advanced and more well developed than just a primitive condition one would imagine. So it tells us a lot about the formation of the human body plan at its very beginning.

That discovery led to you earning the unusual distinction of having made paleo pornography. Can you tell me a little bit about how that went down?

It was really fun. The clip took us about a month to make. We had to sort of model a fish in three dimensions and then scan it. Then we had to put the genitalia on the male and, you know, we changed the color schemes just a little bit, but we have no idea what the males and females were really like -- we didn’t put red lipstick on the female, obviously.

Then we had to figure out the mating position. Male sharks have these claspers [which are used to hold onto the female and transmit semen during mating] that are actually quite flexible and rubbery, whereas these placoderms had quite stiff bony claspers, so they didn’t have the same degree of flexibility. Our deduction was that it had to sort of mate in a 69 position, because the claspers were not flexible enough to come forward like in modern sharks. So that in itself is an interesting revelation — that an early form of copulation was kind of a reverse act.

I’m just imagining the conversations while you were going over the various permutations of how they might accomplish this act.

It was fueled greatly by a few beers in the pub, I can tell you.

To be a fly on the wall in that pub! Early on in the book, you write, "The idea that a male of some primitive archaic creature one day decided to put a part of his anatomy inside a rather delicate region of the female, then decided it felt funky enough to ejaculate his sperm, is pretty odd." It is indeed. It's easy enough to understand why sexual reproduction, as opposed to asexual reproduction, has thrived -- but why the bizarre act of copulation as we know it?

Creationists would contemplate the evolution of the eye, and they couldn’t even contemplate what an intermediate form of eye might look like. In reality, evolution does have intermediate forms. When we think of copulation by internal fertilization such as in the sharks and rays, it's hard to think of an intermediate stage, but there are examples in other fish groups that don’t have copulatory organs but do pass sperm into the females via the cloaca, guppies for examples. So I think with these placoderms, maybe the initial form was really just having the pelvic fins to grasp the female so that the cloacas were juxtaposed to pass sperm inside the female and then eventually part of the pelvic fin slipped inside the female and made that act easier to accomplish and more successful and you immediately have a precedent for an evolutionary advantage. Making that feel good by stimulating the nerves at the end would be the next logical evolutionary step. As a scientist, I can sort of envisage steps that could have happened, we just lack the fossil evidence.

Why is it that the human penis evolved as it did and not into a spikey or corkscrew-like member?

We’re so lucky, because many of our mammal cousins, like squirrels and rodents, do have these amazing swiss army knife type penises. It comes down to sperm competition. It’s also about the female, not just the male, and using their internal anatomy in such a way that the best sperm gets to the top to fertilize the egg. In primates did you know that only a short time ago primates, in the evolutionary line leading to human, had spikes on their penis?

Yikes. What can we learn about our own human sex lives from those of animals?

The bottom line is the animals use so many bizarre ways to reproduce that nothing we do can be seen as unusual. These fundamentalist Christians who say [certain acts are] unnatural? Well, look at the animals! That defines nature.