So much for "family values"

I grew up in the kind of traditional, two-person home that the Republicans glorify. And it was hell 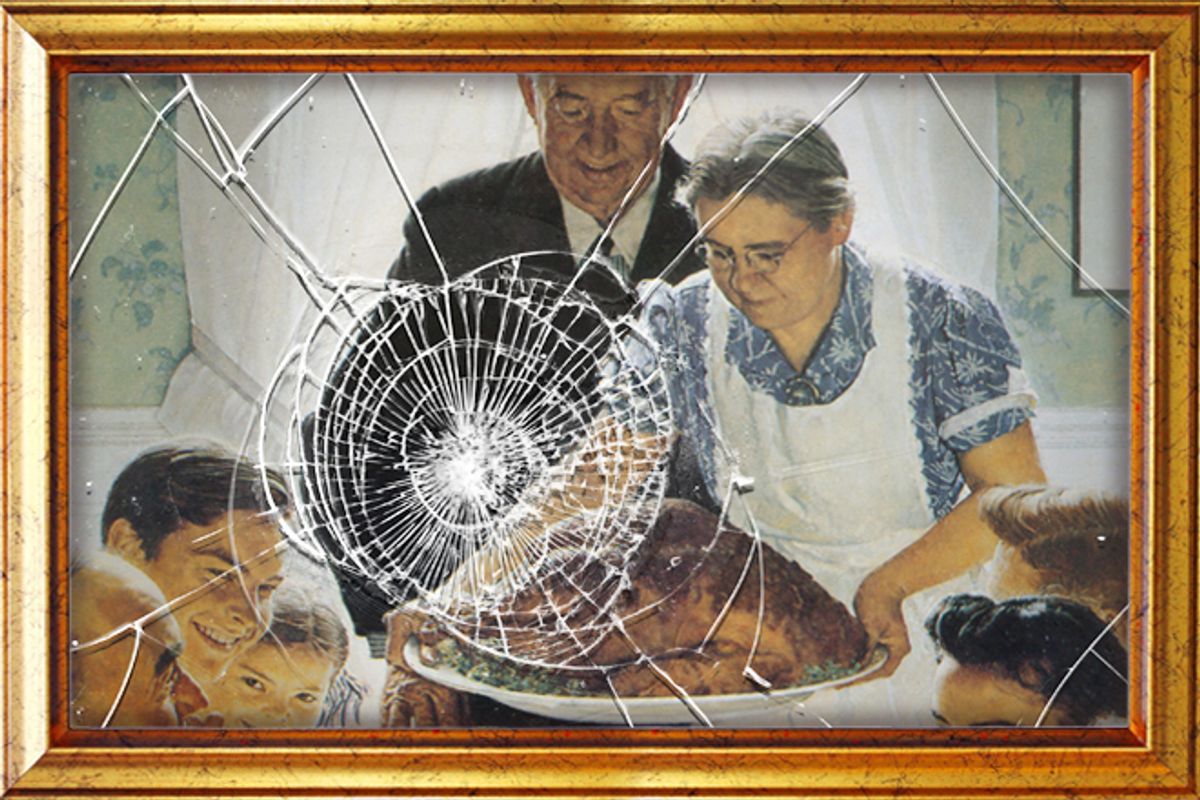 My father asks me what four times four is, and all I can think is “eight,” though I know that’s wrong; whether it’s better — safer — to be wrong or to say, “I don’t know,” depends upon his mood. The way my mother smiles at me as she clears my plate is of no help, there’s no telltale tightness in her eyes. He drums the flashcard against the tabletop and sighs. My fingers worry the edges of the iron-on patches — a rabbit and a duck — that Mom has fixed to my corduroy jumper. I gamble on “eight,” but a yawn slips out instead. I haven’t even closed my mouth before he smacks it open again. He backhands me hard enough to blot out the world.

The family at the kitchen table is an indelible image, classic Americana. It sells pancakes and life insurance, and every four years, it peddles politicians. Each election cycle, the steely female narrators of campaign ads ask us to consider which candidate is best for American families, families that might’ve looked like mine until my father’s hand left me deaf and reeling for days.

I grew up in the kind of two-parent, father-makes-the-bacon, mother-fries-it-up home that Mitt Romney waxed ecstatic about when fielding a debate question on gun violence: “We need moms and dads helping raise kids ... to tell our kids that before they have babies, they ought to think about getting married to someone — that's a great idea because if there's a two-parent family, the prospect of living in poverty goes down dramatically.”

Our house had a parking pad and a fenced-in yard, it was near the best public schools in the county, and a quick drive from a park called “Honeygo,” a word that forces you to smile when you say it. Inside that house, with Sears family portraits from every Christmas leading up the staircase and my trophies on the mantel, a flattened hand was a mercy. I’d taken fists to the face for spilling my milk. When I clogged the toilet, he whipped me with his belt so hard and so fast that the buckle flew off.

Before that debate even ended, my Facebook friends erupted with barbs and anecdotes about the productive lives they lead as non-spree shooters despite (or because of) being raised by single mothers. I wish I had those stories to tell — not memories to relive in therapists’ offices or scars to explain to my lovers. My mother never had the guts to strike out on her own.

As a girl, she’d been sold a bill of goods about the good life: a man who wore a tie to work and a house in a ZIP code full of supermarkets and malls and people who looked just like her; a daughter who’d earn a degree or two and, for a time, an impressive title — until, of course, she met her own man in a gray flannel suit. She wasn’t told what to do when the man who owns the roof over her head slams her into a wall.

Every election cycle becomes a dire exegesis of “family values,” a neurotic fixation on the nuclear family: "Father Knows Best," Mommie Dearest" and "Baby Makes Three" (or Four, or even Five) have become the icons of a bygone era — a postwar wonderland that boomed with prosperity in the shadow of the mushroom cloud.

It may have been the era of unlocked doors, but it was still the America where my father’s father beat him unconscious and my mother couldn’t have girlfriends sleep over — not because she feared a father who might come home rip-roaring drunk and ready to fight — simply because there was no father in the home. Only a mother who worked two jobs to keep her fed and still sewed all her clothes, a mother who told her to never tell anyone that Papa left them, to say, instead, that he’d died in Korea.

So, when Florida Sen. Marco Rubio stood in front of the Republican National Convention and said that, “We're bound together by common values. That family is the most important institution in society. That almighty God is the source of all we have.”

I wondered if he could even begin to imagine that rapturous ache of pressing his thumb into a bruise, just to feel something, anything, other than the swell of panic that can rise hours, even days, after the air in the room — and his father’s mood — has stilled.

When I’ve asked my mother why she didn’t leave my father, she tells me that she wanted me to have what she didn’t: a father. A shared surname was a greater balm than any ointment she could smooth along my savaged back or over her swollen eyes. Being a housewife, a soother of moods, seemed nobler to her than being like her own mother — the woman who wore her pantyhose to bed, just for a few extra moments of sleep between shifts; she may not have cooked dinner every night, but she kept them from starving.

My grandmother needed equal wages; she needed help with childcare, not a boss who’d let her off in time to start the roast. Yet, when a young voter asked Gov. Romney about equal pay for equal work, he responded with a back-patting soliloquy about making sure his chief of staff was always home to make supper for her kids. When Ann Romney took the stage at the RNC, she crowed, “I love you, women!” But the women she described as the backbone of America were mothers and wives, sisters and daughters. This backbone is more like Adam’s rib: women purely in relation to men.

Moms and dads: Gov. Romney laid the peace and prosperity of the nation at the feet of moms and dads. But in his party’s platform, there’s no room, no hope for moms who love other moms, dads who love other dads. And his statements are, by and large, the most benign: The Maryland Marriage Alliance, a group ferociously devoted to defeating the marriage equality bill on my home state’s ballot, proclaims, on its website, that “such a paradigm shift says to children that mothers and fathers don’t matter (especially fathers) – any two ‘parents’ will do.”

As if the parents we were born to weren’t always a matter of happenstance: an elbow jostled at a bar, a muscular hand smoothing the hair away from a blue-shadowed eye, a quick decision that this girl looks hot or that guy seems safe. We are never guaranteed that the people who fit together so deliciously in the heat of a moment can building a lasting love. And it is love, the breadth and force of being wholly, unabashedly loved — not just having two parents who look like the wax figures on a wedding cake — that affirms and redeems us. Poverty alone doesn’t always spark violence. And a two-parent home isn’t always the antidote. The urge to obliterate is as dark and unknowable as the hollows of our bones.

Family, for me, is not a bedrock. It’s the hole I’ve crawled out. When I see Facebook friends in wedding gowns, or cradling their newborns, I don’t feel wistful; there’s no twinge of envy — only the breathless pain of a knife driven deep and twisted hard. I imagine it’s the same pain my father felt when the woman he’d been dating for six months told him, over dinner, that she was pregnant.

His cohort of men was raised to believe that doing “the right thing” meant knuckling under and buying a ring. They were taught that if they put food on the table, they’d never have to swallow their anger. Providing was enough, until it wasn’t. And it never is. My father wanted a life bigger than the yard he mowed. He made us pay for everything our presence cheated him of.

Whenever I need to forgive him, which happens more often as I grow older, I remember the moment he was most proud of me, when a self-portrait I’d done was selected for a state-wide high school art show in the governor’s mansion. The portrait bore my features — the nose that never healed cleanly from a break and still slopes to the right; my father’s eyes and my mother’s mouth — but it was too pretty to be me. It’d been done for a grade, all soft angles and immaculate lighting and as we walked away from it, my father put his arm around my shoulder. As a child, I’d craved his touch as much as I’d feared it; by the time I was a teenager, we were enemy combatants forced to share a neutral country: I’d earned the luxury of being surprised by the weight of his hand.

“It’s good that you have something you love,” he said. He spoke with a hangdog guilelessness that conjured the few photographs of him as a boy: A butterball in a Little League uniform, a cowboy costume, a pair of Levis with rolled cuffs.

I will never know what that little boy wanted to be when he grew up, and I doubt that my father can bear to remember. My mother will never get to be a teacher, which is what she’d wanted when she was a little girl in a hand-sewn jumper; my grandmother would only pay for a typing course.

Still, everything I have in life — a job my father can brag about and an apartment my mother says is “cute, for a single girl” — and everything I’ve become — writer, activist, friend — is not always because of them, it’s often despite them, despite their best intentions, despite everything they were told to be.

My family was never part of the 47 percent Mitt Romney derided for being “dependent on government.” We never wanted for healthcare, for food or for housing — but we were victims. All the hashtags and memes about bayonets and binders full of women serve a purpose, but they can never encapsulate the madness of insisting that rape — if it results in motherhood — is a blessing. The crushing conformity of family first — and at any cost — will make victims of us all: the woman forced to relive the worst night of her life every time she feels the baby kick; the man who has always wanted to be a father, but never will because of whom he loves; and the little girl at the kitchen table who must choose “eight” or “I don’t know.”